Like Cynthia Gooden, the heroine in Opération Séduction, I have never been able to wear perfume. It gives me a sore throat every time. But I love the idea of perfume. I love the names of perfumes, their histories, their bottles. (Especially those miniature bottles they used to give out as samples.) I love the sensuality of perfume, and the idea of men creating perfume for women.

Je Reviens is a famous fragrance introduced in 1932 by Worth, a legendary house of haute couture in Paris. It’s a very feminine floral scent, and because of its name (“I will return”) it was a favorite gift from departing soldiers to their sweethearts.

Six days later, Cynthia still hadn’t called Peter Noel to extend the invitation for the advisory board. She was procrastinating, she admitted to herself. She would call him this afternoon, as soon as she finished her paperwork. Right now it was time for lunch, but she’d already eaten her sandwich at her desk. She had a rule that no matter how busy she was, she had to take at least a half hour away from her office, to rest and recharge her brain. Accordingly, she grabbed her sketchbook and made her way to one of the least-visited galleries, which held a collection of Mesopotamian artifacts. Cynthia loved the objects here, sculptures and vessels made by people who lived at the dawn of civilization, several millennia ago, when the world seemed new. One of the glass cases held Sumerian statuettes of squat, dignified men wearing only skirts of some vegetable fibers or leaves, and clasping their hands in prayer. They were bald and their large, staring eyes gazed back at her calmly. We’ve been watching for a long time, they seemed to say, and we’ll still be here long after you’re gone. She took off her jacket, laid it on the bench at the center of the room, and stood before the case, sketching one of the small alabaster figurines.

After about fifteen minutes, she had achieved a reasonable likeness of the object, but there was something wrong with the lips, which ought to turn up a bit more to properly reflect the little man’s look of tranquil satisfaction. She was making judicious use of her eraser when a voice behind her said, “No sandwich today?”

Cynthia turned in surprise. It was Peter Noel and he was standing quite close; either he wore soft-soled shoes, or she’d been so focused on her work that she hadn’t heard his approach.

“Hello again,” she said, still trying to recover her equilibrium as he looked down at her drawing. Today he was wearing a brown suit with a gold striped tie and a white shirt. He had a yellow gingko leaf pinned to his lapel with a small diamond stickpin. “Pas mal,” he said appreciatively. “He looks pleased to be the object of your attentions. Do you ever show your work?”

“I’ll be the judge of that,” he answered smilingly. He looked down at the ID tag hanging on the lanyard around her neck. “Dr. Cynthia Gooden, Senior Curator of Roman Art. May I introduce myself? I’m Peter Noel. I’m a parfumeur, and my shop is called Essence. It’s on Rittenhouse Square.” 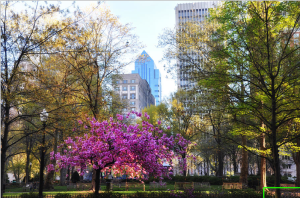 Rittenhouse Square, in the posh part of Philly

“A pleasure to meet you,” she said politely as he took her hand. His fingers were warm and dry, his grip gentle. After a moment’s hesitation, she added, “I’ve heard of you, and… it’s an odd coincidence, but I was planning to give you a call later this afternoon.”

He looked surprised but pleased. “You were? Are you looking for a fragrance?”

“No,” she said, hoping he wouldn’t be offended. “But I’m organizing a show on perfumes in Greece and Rome, and… my colleagues and I think you would be a wonderful addition to our advisory board.” He didn’t answer for a moment, and she quickly added, “The duties are relatively light, and your expertise would be invaluable to us.” Normally she was confident in her ability to charm prospective board members and donors, but looking up at Peter Noel’s rough-hewn face, she had to force her voice to remain level. He was turning those dark eyes on her again, and her throat seemed to be closing up.

“It sounds intriguing. I’d like to hear more about the duties,” he said casually. “But I don’t want to monopolize your lunch hour, and I have to get back to my shop to see a client. If you’re free for dinner on Friday, we could discuss it in more detail.”

“Dinner?” She hadn’t expected this. Was he asking her on a date? She was accustomed to doing business over dinner; there was nothing unusual about that in her line of work. Still, there was a seductive quality in his voice, as though he was flirting with her. He was waiting for her reply, and as the silence stretched out, he began to look amused. Finally she said, “Certainly,” hoping she sounded brisk and businesslike. She stepped over to the bench where her burgundy wool suit jacket lay, conscious that the neckline of her rayon blouse showed some cleavage. She hadn’t seen him looking, but…

“Seven o’clock, then. Maxime’s. May I?” He picked up the jacket as though to help her on with it, but instead of holding it out, he put the collar to his face and, closing his eyes, inhaled. She watched him, wondering what he was doing. Finally he opened his eyes. He was frowning slightly, and two little grooves were visible between his eyebrows, on either side of the bridge of his nose. “You don’t wear a fragrance,” he said, “but you use Pantene shampoo.”

“Yes,” she answered, a little taken aback by his accurate assessment. “I’ve never used a perfume that didn’t give me a sore throat.” He held open the jacket as she slid in her left arm, and then her right. He was standing very close behind her, and he had the feeling that he was leaning in. When she turned to face him again, he gave her an oddly intent look. This time he didn’t smile.

“I look forward to our dinner together, Cynthia.” With a little nod of his handsome dark head, Peter Noel walked quickly out of the gallery.

Notes: I like to sketch when I visit museums. I’ve found that it gives one a much keener appreciation for the objects than snapping photos (and it’s handy when photography isn’t allowed). When you sketch something, you really have to look at it closely and observe the details. That creates vivid memories…