Peter, the hero (antihero?) in my story Operation Séduction, is fond of Shakespeare’s Antony and Cleopatra. He likes to refer to Leslie Favreau as his “serpent of old Nile.” Little does he realize how venomous she truly is.

Un Jardin Sur Le Nil, a unisex perfume by Hermès, is supposed to evoke a stroll through the botanical gardens at Aswan. The scent is redolent of green mango, lotus, calamus and sycamore.

Leslie tapped a lacquered fingernail impatiently on the mosaic bistro table in Wynken de Worde, the popular café-bookstore where she had arranged to meet Peter for a status update. He was late, which was unlike him. As a woman she considered it her prerogative to be late, and indeed, she would never dream of arriving anywhere near the announced time for a dinner or cocktail party. One must always make an entrance. She disliked it, however, when a man kept her waiting. Finally she saw Peter wending his way through the closely spaced tables.

“There’s my serpent of old Nile,” he said affectionately, and laid down a little nosegay of autumn flowers for her. A reference to Cleopatra, she supposed. She was not averse to the comparison, though she remembered reading somewhere that Cleopatra, far from being a beauty, had in fact possessed a rather plain face. The Egyptian queen’s celebrated powers of seduction were the result of careful study and effort, supplemented by lavish spending. “I thought you’d be browsing the books,” he continued, and added playfully, “I was looking for you in the ancient history section.” 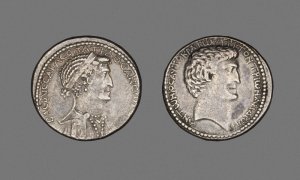 Cleopatra and Antony on a silver tetradrachm.

“Peter, I could take that as a compliment or as an insult. I choose to consider it a compliment.”

He grasped her outstretched hand and, bending, brought it to his lips with just a whisper of contact. “You know you’re the queen of my heart,” he said gallantly. They placed their orders, both opting for the double espresso. 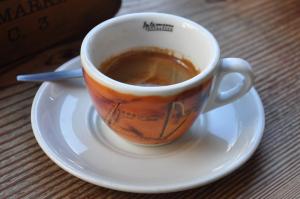 She asked in a languid, almost bored voice, “How goes it with the little Gooden? A success, yes?”

He steepled his fingers in front of him. “You were right. She’s reluctant for a reason that is not immediately apparent. She is visibly uncomfortable around me, though her blushes show she’s not indifferent. This calls for a charm offensive, an opération séduction. It may take some time.”

She wrinkled her nose in surprise and displeasure. Forgetting that she had described Cynthia as an ice princess, she said, “Peter, you amaze me. Since when does it require a charm offensive to bed a nobody like Cynthia Gooden? I thought you would make short work of her.”

He frowned. “Perhaps I’m losing my touch. I’m aging, after all. I feel… older these days.

“Nonsense.” She picked up a set of tiny tongs to drop a cube of brown sugar into her espresso, and waited for it to soften. Obviously his male ego needed stroking. In spite of their bluster, men were very insecure. She would oblige, verbally at least, but any physical parts of him in need of stroking would have to wait until his task was accomplished. “You’re very sexy, Peter. More so than when I first met you. La Gooden is no doubt melting for you, but she’s timid. You overwhelm her.”

“Yes, there is something skittish about her. She reminds me of a plump little Persian cat I brought home one day when I was in grade school. That cat used to rub against my legs constantly and look up at me with her big saucer eyes, pleading for attention, but whenever I tried to pet her, she shied away.”

“But you swept her up into your arms, and voilà, she was yours, yes?”

“No. I got her a soft round cat bed where she felt safe, and whenever she was in the bed, she allowed me to fondle her,” he said, smiling again.

“Ah. But this is a woman, not a cat. Have you made any progress at all?” she asked, unable to keep a slightly scornful tone from her voice.

“Certainly,” he said. “She invited me to join the advisory board for a show she’s doing on perfumes, and we’re having dinner on Friday.”

“Take her home after dinner and invite yourself in,” advised Leslie.

“Patience, mon serpent,” answered Peter. “Allow me to conduct matters as I see fit. I do, after all, have more experience seducing females than you. Unless there’s something you’re not telling me?” He grinned wickedly.

Men were so predictable. She smiled coolly at him, grasping her crystal pendant in her right hand, and then, as he watched, letting two fingers drift lower to caress the top of her left breast.

“There is a great deal you don’t know about me, Peter. If you please me, perhaps one day you’ll learn my most… intimate secrets.”

Note: The concept of the “charm offensive” or opération séduction, comes from Elaine Sciolino’s 2011 book La Seduction: How the French Play the Game of Life. I highly recommend it! We could all use a little more charm in our lives.