I have a restaurant crush. I want to dine at Nineteen, a swank rooftop jewelbox on Rittenhouse Square in Philly. There’s a killer view, a pearl chandelier, and the mushroom risotto is anointed with creamy mascarpone…

This restaurant appears in my story as Maxime’s, Peter Noel’s favorite venue for seduction.

Poivre: One drop is enough.

Poivre is a famed fragrance introduced by Caron in 1954, and one of the most expensive of perfumes. The original (it has been reformulated) was said to smell of pepper, cloves, carnation, vetiver, and sandalwood. Smelling the fragrance has also been compared to biting into the crusty top of a steak au poivre. The unusual bottle looks a bit like a fever-dream design by Jim Woodring.

When Cynthia mentioned that she was having dinner with Peter to discuss the advisory board, Andy nodded, glad to hear this news. “Where are you going?”

“Someplace called Maxime’s. Do you know it?”

Andy’s eyes widened. “Cyn, that’s the new candlelight and white-tablecloth place at the top of the Hyatt. It’s got a skyline view— very romantic.”

“Are you serious? Oh my god,” said Cynthia, feeling a spurt of anger. “So he was coming on to me after all. I didn’t object when he named the restaurant, so he probably drew conclusions from that. I don’t believe it,” she stormed. “He can’t do this to me! One thing I know for sure is that I don’t want to become the next notch in Peter Noel’s pricey Ferragamo belt.”

“Then don’t,” said Andy. “Just enjoy the dinner and the company of a handsome man, indulge in a mild flirtation if you feel like it, and then go home alone.”

That sounded so simple, but Cynthia knew that if Peter turned on the charm, she would find it hard to resist him. Especially after a couple of drinks. Just thinking about his dark eyes made her face and neck feel heated, not to mention other parts of her. She had already wasted far too much time thinking about him, and had dreamed of him more than once. “Maybe I should insist on paying for the dinner, since I’m asking him to serve on the board.”

“That would give you more power,” agreed Andy with a smile, “but I don’t know what Barbara would say if you put a dinner at Maxime’s on your expense account.”

“I’ll lay out the money myself if it comes to that,” said Cynthia. “And maybe I should wear something really unattractive, too.”

They looked at each other for a long moment, and then both said, “Nah.”

Cynthia arrived in the reception area of Maxime’s at seven on the dot. To send the message that this was a business dinner, she had decided to wear a suit. It was her best, a deep charcoal Ann Taylor suit in lined crepe, its skirt cut just above the knee. With this she wore a cream satin tank top, and a choker of big, eye-catching crystal and fluorite beads. She tried on her two dressiest pairs of shoes, and rejected the black ankle-strap platforms in favor of a sleek pair of shiny pumps. Most men didn’t even notice the shoes a woman wore, but Peter was different. He would definitely notice, and she wouldn’t put it past him to interpret ankle straps as a sexual invitation. To add extra insurance against the possibility of falling prey to him, she wore an ugly bra that nevertheless gave good support, and a pair of comfortable, granny-size briefs. She would have to be very drunk indeed before she let him get a look at her in those.

Peter was waiting for her, and the sight of him made her heart flutter. He was deliberately dressed down, without a tie, and his crisp white shirt was open at the neck. Yet over the shirt he wore a very dark blazer with sateen lapels, and in his buttonhole was a white rosebud, just beginning to unfold itself. 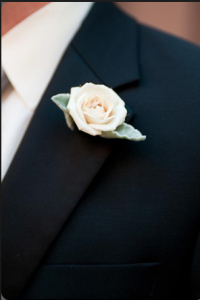 His trousers were almost black too, and the general effect was of a man in evening dress who has removed his tie in order to embark on the less formal pleasures of the night. He came forward to greet her. “Cynthia.” Keeping his eyes on hers, he took her hand and bowed over it, but didn’t kiss it, to her relief. Instead, he brought it close to his lips, and she could feel his breath on her skin, which was almost as disconcerting.

They were shown to a windowside table for two by a sexy hostess clad in a black minidress who, judging from the way she smirked at Peter, seemed to be well acquainted with him. Cynthia wondered cynically whether he’d bedded her. Or was this where he took all the women he planned to seduce? The panoramic view of Philadelphia was breathtaking, and the space itself was lovely, a large rotunda ornamented by a chandelier dripping with pearls.

Palace in the sky: the dining room at Nineteen/Maxime’s in Philly

“This wasn’t at all what I was expecting,” she told him. “I thought it would be someplace more… modest.”

“Do you dislike it?” he asked, a look of concern on his face.

The question surprised her. “No, it’s beautiful here,” she replied, looking out the window at the sparkling city lights. It was already dark.

“I thought you looked as though you could use a dose of luxury,” he said. “I love this place for the view, but the food’s good too.”

Cynthia scanned the menu for something moderate in calories. It was a seafood place; good. She could have a salad and the Pennsylvania trout; with luck she’d bring some of it home.

“Would you like to start with some oysters?” asked Peter. “Or perhaps sashimi? The raw bar here is excellent. We could begin with Champagne.”

Oysters? Champagne? “Oh no, I don’t think so,” she said lightly and then, feeling more confident, she added, “We don’t know each other well enough for that.”

“Okay,” he laughed, seeming slightly abashed, as though she’d caught him trying to be seductive. “But how about a bottle of the Spanish Albariño? That is, if you’re going to have fish.” Seeing that the price was reasonable, she agreed to this, and they ordered.

After the wine was opened and the salads had arrived, she explained that as a member of the advisory board, all Peter had to do was attend a few meetings, contribute his expertise, and come to the opening night of the exhibition. “The Ph.D.’s usually write an essay for the catalogue, but we wouldn’t ask you to do that,” she said, “unless you want to.”

“No, no,” he said. “I’d make a hash of that.” Then he gave her a knowing look and added, “I’m not a scholar. Tell me, Cynthia, why do you want me to be on this board? I was very pleased to meet you, that day in the Frommer. Did you perhaps feel the same?” His hand crept over the tablecloth, closer to hers. He had beautiful hands, with fingers that were large and masculine, yet refined. She glanced up to see that he was fixing her with a look, a devastating look that caused a reflexive twinge in her lower belly. No, she said to herself. His tricks —and his self-regard— are all too obvious. He’s very sexy, but that doesn’t mean I have to give in.

She drew a breath. “Well, Peter,” she said conversationally, “it wasn’t for your pretty hazel eyes.” She smiled inwardly as she saw him react to that. “To be perfectly frank, it’s important to us to strengthen our contacts in the community. You have wide connections that could be useful to us in attracting donors.” He nodded in acknowledgment of this. “And as a professional in the field,” she continued, “we think you can advise us on the applied aspects of the show. For example, I’d like to create a hands-on activity for children involving perfume. Would that be feasible?”

He looked intrigued. “Yes, though it might depend on your budget. Here’s an idea. Give them a light olive oil, as neutral as possible, or perhaps an almond oil. The kids could add a variety of aromatics to a container of oil during the activity, and then take it home and heat it in a saucepan of water with their parents’ help. The heat will draw out the fragrance. After that, if they steep it for a few hours and strain it, they’ll have a nice scented oil, just like the ones people used in antiquity.”

“I know about scent. It’s my business,” he said. He had dropped the seductive manner and now he was speaking in what she imagined was the tone he used with other men. He sounded enthusiastic, almost boyishly so, and this made him even more attractive to her.

“How much are you willing to spend on the ingredients?” he asked. “You’ll need something like myrrh or labdanum to provide the base note, and that can become pricey if you have large numbers of kids participating, and possibly wasting some of the materials.”

“I don’t know,” she said, feeling a little chagrined that she had failed to prepare properly for this meeting. Foolishly, she hadn’t given a thought to anything but her clothing and how to circumvent Peter’s seduction plans. “I’ll talk to Barbara and get you some numbers.”

Note: the children’s activity Peter suggests is based on “Spicy Scents,” from the 2012 exhibition “Aphrodite and the Gods of Love” at the Getty Villa in Malibu.