Today, on the occasion of my 201st post (hooray!), I have the pleasure of introducing you to some of my favorite creative bloggers. We begin with Robin Gott, a cartoonist whose quirky, clever drawings remind me of the art of Edward Lear and John Lennon. I thank Rob for inviting me to join the blog hop! Here’s his bio:

Robin ( Rob) Gott grew up in North London, England, in the house once inhabited by the boy who would grow up to become Boris Karloff. Scared away by the ghost of the famous horror film actor, the family moved to a house in Stansted in Essex, previously owned by Douglas Fairbanks Junior’s daughter, and the venue of a Rat Pack party or two. 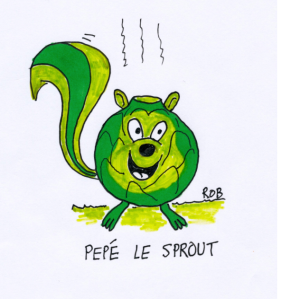 I am a huge fan of Pepé Le Pew, so I loved this little fellow. If only every sprout had his Gallic charm, I might eat them more often.

Whether all this show business history had any effect on the youthful Robin is food for thought, but he did drift into working in the film and TV animation in London, as an artist and later working with story development. In 1994 he packed his bags, moved to Malmoe in Sweden, fell in love with the lovely Karin, and there he’s been ever since.

Rob, I want to see a self-portrait! Or was that you as Pepé? Photo courtesy of David Möller.

He draws cartoons, acts and writes. He’s written songs, poetry, scripts for graphic novels, two screenplays (one commissioned by Per Holst, a Danish producer) and is now being encouraged by his two boisterous sons, aged 8 and 10, to write a children’s novel. This is very much in the early stages and at the moment he’s gathering all the ingredients for a hopefully wondrous concoction inspired by Anthony Horowitz, Roald Dahl and of course – Boris Karloff!

I love Robin’s list of inspirations: My own creative work is inspired by Ronald Searle, Roald Dahl, Quentin Blake, David Almond, Saul Steinberg, Ian Fleming, James Thurber, Woody Allen, Charles Adams, Tolkien, Picasso, Tom Waits, Charles Shultz, William Shakespeare, John Lennon (drawings and songs), Spike Milligan, my childhood in North London, and my own kids. As he says, imagine getting all these folks together in one room over dinner! You can see Rob’s illustrations on Shelley Sackier’s blog Peak Perspective, and on his very own blog HERE.

The next part of the blog hop is my (Linnet’s) answers to the Big Four Interview Questions.

1. What are you working on? Having recently completed a book, I have descended into that lonely trough between projects, juggling three story ideas that are Not Ready For Prime Time. (When in the doldrums, I remind myself how brilliant Gilda Radner was.) My most outlandish idea at the moment involves Gaius Julius Caesar’s purported sighting of unicorns in the Black Forest, and his encounter with a Gaulish princess who is considerably less civilized than Cleopatra…

2. How does your work differ from others of this genre? I usually write about brainy female academics meeting sexy men who look like Ciarán Hinds. This was a huge, gaping chasm in the romance genre, so I bravely stepped forward to fill it.

3. Why do you write what you do? I never wrote anything creative until my mid-forties, when I suddenly acquired a trio of Masculine Muses. One of them lives in my house and the other two inhabit my head, where they have established a cozy Man Cave complete with large screen HD TV, a fridge stocked with Guinness, cases of salt-and-pepper kettle crisps, and a Weber charcoal grill on the walk-out patio (because gas grills are for wusses). When I don’t write, they threaten to keep the TV tuned to ESPN twenty-four hours a day.

4. How does your writing process work? Usually it begins with a dream that contains a story fragment. I write that piece, and the rest of the story coalesces around it. Other than that, the process is quite mysterious. I think my Third Muse does most of the work. During his lifetime, he was the Tyrion Lannister of British letters and had quite a fertile brain. His true ambition, though, is to write a really sizzling sex scene in heroic couplets.

First, a poet! Her blog is called Morrighan’s Muse. Here you will find something different each time you visit: words of sadness, joy, and whimsy. Velvet also features the occasional photo of Richard Armitage, which always makes me happy. I like this passage from a recent post called “The Gardener of Rose Park”:

In the cover of night, he delivers them
elephants, giraffes, Komodo dragons
there’s even a centaur with his shield by the front door
and an alligator – though firefighters call it an armadillo –
keeps watch at Station Number 4

Here are Velvet’s bio and picture:

Since discovering Elizabeth Browning, Edgar Allan Poe and Shakespeare’s sonnets, Velvet Durano has been an avid reader and writer of poetry. She currently maintains a private massage therapy practice and is also a continuing education provider. When she’s not working or chasing after her 4-year old son, one can find her writing poetry or working on her novel. You can read some of her poetry on morrighansmuse.com.

Longtime blogger Velvet has a photo of young William Faulkner on her blog to provide inspiration. In profile, he looks a lot like Richard Armitage…

Another creative blogger is Nicholas Rossis, who writes science fiction and children’s stories. On his blog about indie publishing, he offers practical tips and advice on marketing, a forum for the big debate over Amazon’s role in the publishing world, and musings on the craft of writing fiction. I like the way he keeps things positive and light-hearted. Furthermore, I’m reading his novel Pearseus Year 18: The Schism and it’s an engrossing look at what happens in the long term when a diverse group of people crash-lands on a distant planet. Here’s his bio and photo:

Avid reader. Web developer. Architect by training, holder of a PhD in Digital Architecture from the University of Edinburgh. Now, author.

Nicholas loves to write. His first children’s book, the Runaway Smile, is currently being illustrated. Mad Water, the third book in his epic fantasy series, Pearseus, will be published on July 15th, 2014, unless he’s arrested for murdering his deadline-ignoring illustrator. He has also published The Power of Six, a collection of short sci-fi stories.

He lives in Athens, Greece, in the middle of a forest, with his wife, dog and two very silly cats, one of whom is always sitting on his lap, so please excuse any typos in his blog posts: typing with one hand can be hard…

Good heavens, what an attractive group of people I have chosen for my Creative Blog Hop! But Nicholas, there should be a photo of you with the lap cat…

Finally, a longtime favorite of mine is the mother-daughter team Violet and Miranda, who create Violet’s Veg*n Comics. Their artwork is absolutely stunning. Their blog is a great resource for vegan kids of all ages from 2 to 92. Here are a couple of samples, from a story called “Hazel and the Honeybee.” 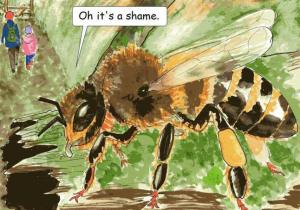 This is my absolute favorite. I never get tired of looking at it.

And here’s an excerpt from their “About” page:

Violet’s Veg*n e-comics is full of stories about children who, growing up veggie/vegan, have battles to fight, victories to win, games to play and cakes to eat. At Violet’s Veg*n e-comics all the comics are free to view and there’s no waste of paper or plastic in their production! We’re saving the planet – one comic at a time! Yay!

Writing this post has reminded me what an amazing creative community we have in the digital world, on WordPress and beyond. I’m proud to be a part of it.