Friends, I am happy to report that London is still there. The British Government seems to be circling the drain. Theresa May is a zombie prime minister, propelled by dark forces and plodding along without realizing that she is dead. She’s headed for a very steep cliff, and together with the other Tories, appears intent on mindlessly pulling the whole country into the abyss.

But at least for now, the UK is still scraping along and London is there at its heart, thrillingly alive, and full of all the colors of the world.

I particularly liked these colors. I think there are more macarons in London now than in Paris…

I was there for a conference, and I took the opportunity to see Ralph Fiennes and Sophie Okonedo at the National Theatre in one of the very last performances of their Antony and Cleopatra. I had a chance to see how that big revolving drum beneath the stage of the Olivier works. It lets them change the set very quickly, and it was used to great effect, making the three and a half hours go by in no time. As for the acting, a friend remarked that the two leads are sexier apart than together. That’s about right. You can’t manufacture chemistry, but the acting was impressive, all the same.

Sophie Okonedo as Cleopatra, with the body of Antony (Ralph Fiennes). Photo by Johan Persson.

A pre-show dinner in the Terrace restaurant at the National Theatre: a salad of thick puntarelle shoots, oyster mushrooms, quail egg and romano cheese; three dumplings of ricotta and butternut squash; and a view over the Thames.

I made my usual pilgrimages to my favorite places to shop, but with a new consciousness of how Anglophilia always blinded me to the darker side of the UK. England combines a romantic view of its own insularity with the arrogant presumption that it knew (knows?) best how to rule a host of other people around the world. Fortnum’s sells an ideal of luxury based on the glamour of royalty and the prosperity of empire. Does a hankering for afternoon tea suggest a secret desire in Fortnum’s many customers to be “upper class”? Or is it just that we shoppers take sensuous delight in colorful marzipan fruit, miniature sandwiches, and fine porcelain?

The confectionery counter at Fortnum & Mason is my delight. Photo by SophieStudiesAbroad. Click for source.

Nougat, pâte de fruits, and chocolate from Fortnum’s. I also got some vegan marshmallows (rose, cotton candy and vanilla) which were so good, I gobbled them down before I had a chance to take this photo.

The Empire has faded away, but its sense of entitlement and willful ignorance are still to be found in the people who sold to British voters the fantasy that the UK still has “imperial” leverage with Europe, or that its people can somehow exist as an island, entire of themselves. I suppose that theoretically, they can do this. But don’t ask me where they’re going to get all the fresh tomatoes for those famous English breakfasts. To say nothing of lifesaving medicines…

Another favorite is Hatchards, the oldest bookstore in London, the neighbor of Fortnum & Mason, which also enjoys the patronage of the Queen. Today it’s owned by Waterstone’s, but it still has a very distinctive romance all its own. I love the carefully curated selection of poetry and essays, and especially the publishers’ series which carry on the 19th-century tradition of beautiful book design made affordable to the average customer.

But I couldn’t help noticing that, although Hatchards has a section devoted to Wales and another on Scotland, there is no section on Northern Ireland (and certainly not one on the Emerald Isle itself, for all it is the earliest and most important of England’s former colonies). Seamus Heaney at least is there, having won the Nobel Prize. What you will find in abundance is books on English church architecture, the poetry of John Betjeman (founding member of the Victorian Society), perennial borders, and other odes to Englishness. There is a section devoted to “Foreign Literature” (not “World Literature”).

The last thing I want to do is complain about a brick and mortar bookstore, and I still dearly love Hatchards. But I saw it with new eyes on this trip, and wondered for the first time about the principles of selection and curation for a shop which strives to be both a general bookstore and an icon of Britishness. What is Britishness today? Is it really still about the village green? Or do we need to think of it in a much more inclusive way? 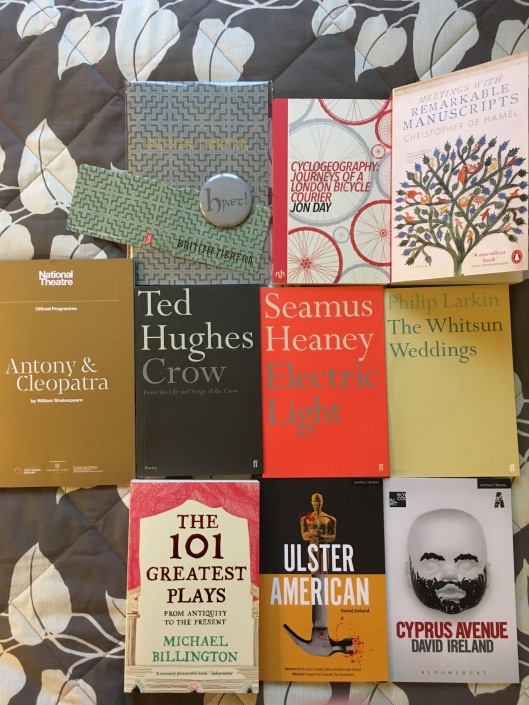 A selection of literary treats bought in London: items from the National Theatre, the British Library, and Hatchards.

The British Library was holding an exhibit called “Anglo-Saxon Kingdoms,” which I’m sure was planned well before the 2016 vote, so I don’t see it as a secret vote of support for Brexit. It is the business of the British Library to study that which is British, including the ancient British. But as we have learned from recent controversies, even Roman Britain had a very diverse population.

The Codex Amiatinus: the earliest surviving complete Bible in Latin. It’s HUGE! Photo by Sandra Alvarez for the Medieval Magazine. Click for source.

Catching up with a friend at tea or supper in London is the most delightful of outings. I have a special friend who loves opera, and chose Balthazar, right next to the Royal Opera House, for our dinner. I can report that London restaurants are still expensive and the food is still very good. Balthazar’s macaroni cheese has been written up in Esquire as “the best in London” and it was indeed delectable, with a crispy, umami-laden crust of Gruyère. Perfect with a pinot grigio while discussing the charms of Ralph Fiennes.

Balthazar’s mac and cheese in a cast-iron serving dish.

Balthazar near the Royal Opera House is a delightful but crowded French brasserie.

Last but not least, the Senate House Library was staging an exhibit of books on the history of magic, based on the collection of magical literature donated by stage magician Harry Price. As a longtime lover of magic and investigations of the paranormal, I enjoyed this very much. 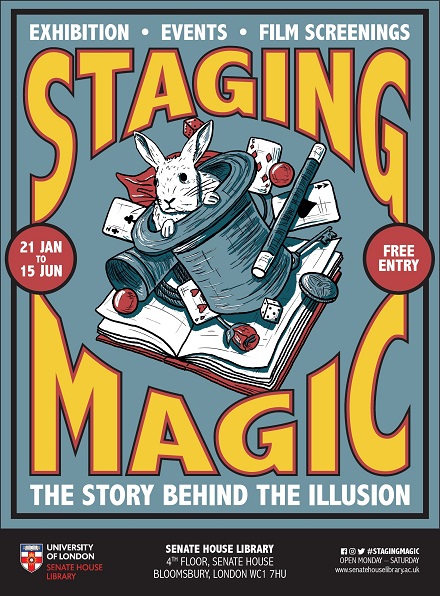 My visit was invigorating and sometimes bracingly chilly. (I brought a pair of tights which unfortunately had to be discarded because they kept falling down around my knees.) But the winter weather in London seems very mild to an Ohio resident, so it was a pleasant break from what we have here at home. À la prochaine, Londonium. I hope to greet you again, hale and hearty, at the Chelsea Flower Show!

Beautiful china in Heathrow airport. They even have a housewares store. I’m not quite sure how people get this stuff home after they buy it.

13 thoughts on “London Is Still There”