The first book by Lois McMaster Bujold is still my favorite from this expert storyteller. It’s as gripping now as when I first read it in the 80’s, and the conflicts it explores are still achingly relevant.

The Baen paperback cover art, with an artist’s evocation of Aral and Cordelia.

The story begins like a predictable romance. Cordelia Naismith, the commander of an environmental survey expedition, is taken prisoner by Aral Vorkosigan, an enemy captain from Barrayar. The Barrayarans have secretly claimed the unmapped planet of Sergyar as a base for their expansionist war, and they wipe out Cordelia’s camp. But there’s a wrinkle in Vorkosigan’s plans: his own men have mutinied, and his position is as precarious as Cordelia’s. In order to reach a hidden supply cache and survive, they need to cooperate.

Yet there’s much more to this novel than romance. It addresses moral questions about the treatment of prisoners and wounded. While most of Cordelia’s crew have escaped, her last surviving colleague, Ensign Dubauer, has been mentally disabled by a nerve disruptor. Vorkosigan suggests a mercy killing, but Cordelia offers her parole in exchange for bringing the wounded Dubauer on their 200-kilometer trek. 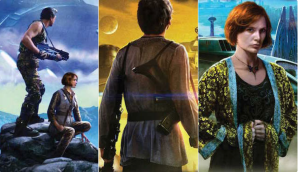 Baen is known for “bad” cover art, but I think these are attractive. From left to right, Shards of Honor, The Warrior’s Apprentice, and Barrayar.

Bujold sets up a conflict of cultures and worldviews. On the wealthy, egalitarian and urban planet of Beta, poverty has been abolished, variable gender identity is taken for granted, and the lives of disabled people are valued. On Barrayar, a planet with a military aristocracy, a large rural population, and a fairly recent history of technological advances, traditional gender and sex roles are entrenched, babies with disabilities are routinely killed, and toxic masculinity reigns. (Bujold describes the practice of infanticide on Barrayar in a later short story, “The Mountains of Mourning.”)

Shards of Honor explores the interior and exterior aspects of honor, and how personal honor may conflict with service. In Vorkosigan’s military caste, the “Vor” accept each other’s word of honor without question, since violation would mean an unbearable public loss of face. For Vorkosigan himself, honor is also about maintaining his self-respect regardless of external appearances. Yet the administration of a warlike empire and the ruthless politics of Barrayar’s imperial court ravage his sense of integrity. Meanwhile, Cordelia introduces Aral Vorkosigan to her own brand of honor, which has to do with protecting the vulnerable and innocent.

Now, as to that romance…  Aral Vorkosigan happens to have certain qualities in common with Edward Rochester (of Charlotte Brontë’s Jane Eyre):

Of course, there are big differences; this is no Jane Eyre retelling. Cordelia is the same height as Vorkosigan, not tiny like Jane. She’s an astrocartographer and navigator. And trained in military ops. Vorkosigan, meanwhile, lacks Rochester’s arrogance and is not as insecure. Think of a saturnine nineteenth-century Russian Grand Duke, with a sense of humor and a scar on the side of his chin. In space.

The author has said that she pictured Aral as looking like English film actor Oliver Reed, scar and all. Come to think of it, he could have made a very interesting Rochester.

The sequel, Barrayar, delivers action and suspense so continuously that you can barely catch your breath between the crises. Not much time for romantic dalliance between the lovers, but plenty of drama and intrigue. There is also the birth of Aral and Cordelia’s extraordinary son, Miles, who becomes the main character in the later books. This is space opera at its best. 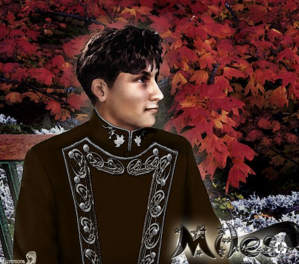 If only the cover art were as stunning as the fan art: a fetching portrait of young Miles Vorkosigan amid the reddish foliage of Barrayar, by gemmiona on Deviant Art.