Recently while browsing the bookseller site AbeBooks, a little two volume set captured my attention: The Wandering Hermit. What a fabulous name, thought I. A hermit is generally someone who hides away in one place, away from the eyes of the world. But a wandering hermit! What could it mean?

I happen to be a collector of small-format antiquarian books, and these two books, while not strictly miniatures, measure a diminutive 11.5 x 7.5 centimeters. Furthermore, they were published by Malepeyre in Paris in 1823, and printed by the notable Firmin Didot and Sons. My interest was piqued. But let’s get back to the Hermit in question.

They look towering in this photo, but these are pocket-sized books, smaller than 3 x 5 inch filing cards. 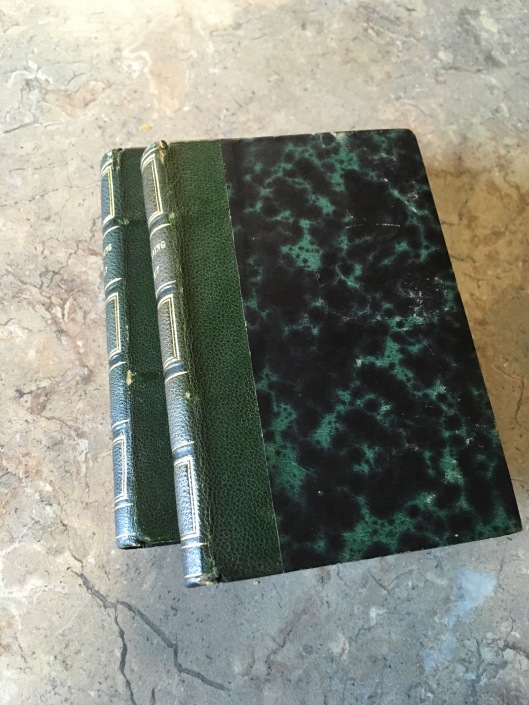 The books have a “quarter binding” with leather spines and marbled paper boards, and they’re in fairly good shape.

Googling “wandering hermit” did not get me far at first. I found “a cozy, independent bookstore” in Wyoming (with “great beverage bar”). A purveyor of psychic readings and tarot cards also goes by this name. But the epigraph of my little books provides a hint:

The quote is from The Hermit by Anglo-Irishman Thomas Parnell (1679-1718), friend of Pope and Swift, and an enthusiastic scribbler. The Hermit was his one big hit, but he also translated Homer’s Battle of the Frogs and Mice (doubtless encouraged by Pope). He seems to have been the great grand-uncle of the Irish statesman Charles Stewart Parnell. Here are the charming first lines of The Hermit, which Walter Scott used as the epigraph to Chapter 16 of Ivanhoe:

Far in a wild, unknown to public view,
From youth to age a reverend hermit grew;
The moss his bed, the cave his humble cell,
His food the fruits, his drink the crystal well
Remote from man, with God he pass’d his days,
Prayer all his business—all his pleasure praise.

One day, the Hermit of Parnell’s poem decides that he needs to get out and see the world. And this is the source of the quotation in our two little volumes:

Voilà! The hermit wanders! But there is more to the mystery. The anonymous author of this book calls himself “The Hermit,” but who was he? Let’s look at the title page:

The author’s first book was The Hermit in London, offering amusing vignettes of the social scene there in the early 19th century. Perusal of the table of contents reveals that this new work deals with Paris. There are chapters on The Boulevards, The Palais Royale and The Cimetière du Père Lachaise. Even more enticing, we read of Mustaches (“Let not the fopling suppose that his downy ornaments bear with them the effect of admiration or awe in France”), Extraordinary Saving in Female Dress (“Shoes once a week suffice for my unambitious dress, and I can make a pair of gloves do twice”), and Spoiled Children (“After we had proceeded half a mile, Alphonse recollected that he had left his favourite poodle at home”).

After reading these delights, I knew I had to learn the identity of this Mystery Man who goes by the name of The Hermit. Back to Google I went, and soon turned up more evidence. His name was Felix McDonogh, and he was another Anglo-Irishman, born in London to Irish parents. After much toil, I discovered this elegant image of him in The European Magazine for April 1824.

According to a biographical summary in Notes and Queries, McDonogh “received a good classical education, went into the army, and travelled a good deal. Eventually he became a booksellers’ hack, and died in poverty in 1836.” (That last sentence is a remarkably dismissive takedown.)  In The European Magazine, by contrast, a certain E. M. writes that McDonogh was descended “from the McDonoghs, chiefs of Corran,” and had been a childhood prodigy in Latin and Greek. He learned dancing, horsemanship and fencing from all the best masters, moved in the highest circles of society, and made the Grand Tour (learning four more languages on the way). He was “at heart a rake,” in love with every pleasure, yet had “a natural abhorrence for vice.” In short, a manly paragon!

The internet has a way of laying bare everyone’s secrets, and our Hermit is no exception. As a young officer in Aberdeen in 1802, he and seven other men of his regiment were charged with murder after they drunkenly fired on a crowd of men and boys who were pelting them with mud and straw. The regiment was celebrating the birthday of George III. Four people died and ten were injured, but the verdict was “not proven”; McDonogh testified that he thought the bullets were blanks. As the author of his biographical note dryly remarks, “I have little doubt that some account of McDonogh’s life would be interesting, if not much to his credit.”

But wait–there’s more. The Aberdeen incident happened in his youth, but as late as 1824 we find Felix McDonogh and his friend Henry Druid defending themselves in the Old Bailey. The victim, Thomas Weaver, testified:

On the 29th of June I was at The Royal Saloon, Piccadilly, and made some observation upon “The Hermit in London”; the prisoners were there. Druid said that his friend on the left was the author of that work – upon that we entered into conversation on the nature of the work, and I asked him to drink some wine, which he did – this was about twelve o’clock at night: the Saloon is a tavern. Captain Duncan, (as the prisoner M’Donough was called) gave me an invitation to go and see him; his address was “Captain Duncan, Petersburg-hotel, Dover-street” – Druid gave his address “Mr. Jones, No. 15, Newland-street, Kensington.” I have enquired at Kensington, and could not find that such a person lived there. I left the Saloon in company with both the prisoners – I was not drunk: I was elevated with wine, but not so much but that I knew what I was about. We had a coach…

Weaver shared a ride with the two men, and afterwards discovered that he had been relieved of his watch and a wallet containing 100 pounds. Both McDonogh and Druid were living under assumed names, which suggests a certain impurity in their motives, but despite this, the pair were acquitted.

In the dedication to The Wandering Hermit, McDonogh delicately alludes to the reasons he keeps his identity secret; he speaks of “my history and my wrongs,” circumstances which have rendered his life a melancholy one. He hopes that his friend J. W. Lake, who edited the book series, will remember him “as he was, and not as he might have been.”

Above all, his wanderings through life “have not been without observation”; he has seen, and remembered, and noted down everything.

Despite his woes, The Hermit had true friends. (Snippet from E. M., writing in The European Magazine, April 1824, twelve years before the Hermit’s death.)

10 thoughts on “The Wandering Hermit: A Bibliophilic Mystery”