fiction, King Cole Bar, murals, The Importance of Being Earnest

New York City is full of iconic murals. My favorites are the ones in the bars. There’s something about surroundings of great beauty that makes your cocktail taste ever so much better. I suppose that’s why the King Cole Bar in the St. Regis Hotel charges an ungodly $25 for its Red Snapper, a cocktail of vodka and tomato juice said to be the original Bloody Mary. Your consolation is that you get to look at Maxfield Parrish’s 1905 painting of Old King Cole. 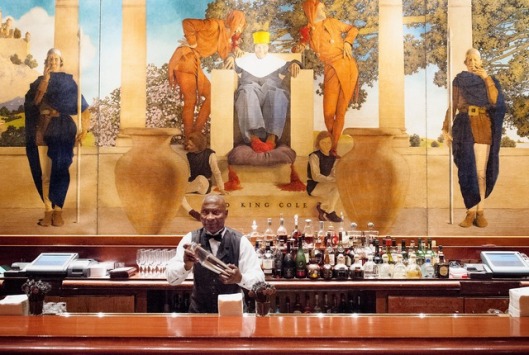 The King Cole Bar. The mural was commissioned by John Jacob Astor IV, who died on the Titanic. It was originally in the Knickerbocker bar, and was moved to the St. Regis in the 1930s. 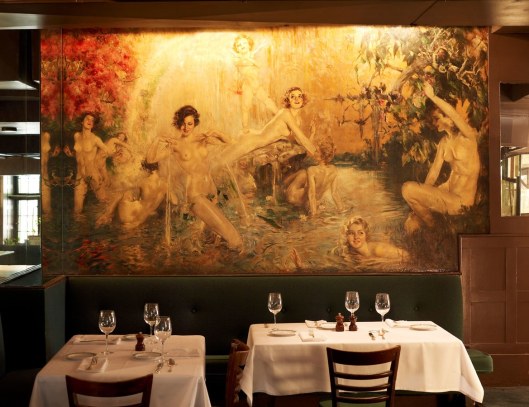 The former Café des Artistes (now the Leopard) boasts a set of stunning murals of nude wood nymphs at play. They were painted in 1934 by Howard Chandler Christy, otherwise known for the more dignified “Signing of the Constitution” in the US Capitol. 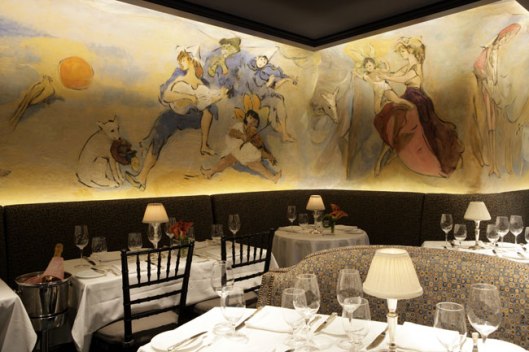 The Long-Suffering Husband won’t hear of our staying in the Carlyle Hotel, but I have twice had the pleasure of visiting the Café Carlyle, a noted spot for cabaret, and its dreamy, whimsical murals by Marcel Vertes (1955).

Tabitha hung up the phone. The job was hers, and the pay was more than enough to live on, quite generous in fact. She hadn’t tried to negotiate, even though she knew that women usually fared worse than men in the salary department, because they didn’t haggle. No matter. The job is mine! She felt lightheaded.

Mark was in Georgia swinging his sword, so she called Gran and they arranged to celebrate at the King Cole bar in the St. Regis hotel. This was a pricey place for a drink, but it was Gran’s favorite when in town, and Tabitha loved the famous Maxfield Parrish mural. Besides, the bar dispensed wasabi peas, pretzels and glazed nuts with its $25 drinks.

Gran looked elegant, in a Prada houndstooth belted suit and low-heeled moss sateen pumps. At seventy-five, she still had a slender figure, something Tabitha hoped to emulate, if she was fortunate enough to reach that distinguished age. When they were settled at a table with a pair of the King Cole’s signature Red Snappers and a tray of bar snacks, Gran said, “Now. Tell me all about it. You haven’t stopped smiling since you got here.”

“I went there this afternoon,” said Tabitha excitedly, “and got a tour of the whole place. Gran, this collection is fabulous. I’ve never seen anything like it except in truly venerable old libraries. I’ll be helping Nigel with the medieval materials. He already showed me a group of items he wants me to work on. Some of them have skimpy descriptions which need filling out, and some he suspects have errors in the identifications.” Mr. Porteous owned many of the usual illuminated manuscripts one saw on the market, Books of Hours and Bibles and psalters, but also some literature, including saints’ lives, and a variety of secular works which lacked illustrations, yet were far more rare and interesting.

“This Nigel,” said her grandmother, sipping her drink. “Is he a single man?” Gran was delighted about the job, but she placed a high value on marriage, and hadn’t yet given up on Tabitha. From time to time, she arranged introductions to the eligible grandsons and nephews of her bridge-party friends. Because of their obviously staged nature, these were awkward occasions, and none so far had led to romantic relationships, though Tabitha had formed a few casual friendships with the men, most of whom were recovering from a first or second divorce.

Not that Gran lacked standards or would be happy for Tabitha to marry just anyone. She enjoyed picking over the many failings and defects of potential suitors, often before they had so much as laid eyes on Tabitha.

Tabitha was well aware that some of Gran’s friends cringed when they saw her coming. In their view, she was well past her freshness date, and ought to resign herself to dignified spinsterhood instead of throwing herself at any eligible male who came in view. Then there was her background to be considered. She could just imagine the old biddies discussing her: Guinevere’s laying out lures again to catch a husband for Tabitha. Yes, the daughter of that depraved monster! Can you imagine? And illegitimate to boot. Gran, on the other hand, held an unshakeable belief in Tabitha’s beauty, desirability, and charm.

“I think Nigel’s dating Ruth, the scientific cataloger,” replied Tabitha. “Besides, he’s not my type. He’s very slight and has big ears.”

“That didn’t stop your mother,” observed Gran dryly, referring to Melinda’s husband of ten years, a diminutive attorney named Henry Boorman. Gran blamed Henry for supporting Melinda’s decision to air her ordeal on the talk shows, and she suspected that Henry’s motive had been financial. Tabitha, for her part, was hurt and angered by the fact that her mother, who had always refused to talk to her about Corbin Crowe or her early childhood, was willing to answer such personal questions for strangers. Since 2004, their relationship had been strained, at best.

“A nincompoop,” said Gran dismissively, finishing her drink and signaling the waiter for another round. “He’s brainless, in case you haven’t noticed. And completely wrong for you.”

“No, he merely hits other men with sticks,” said Gran crisply.

Tabitha chuckled. “Well, a man should always have an occupation of some kind.”

Notes: Tabitha’s final words are a play on one of Lady Bracknell’s lines from Oscar Wilde’s The Importance of Being Earnest:

JACK: Well, yes, I must admit I smoke.
LADY BRACKNELL: I am glad to hear it. A man should always have an occupation of some kind. There are far too many idle men in London as it is.

Lady Bracknell is one of the great gender-bending roles. She’s been played by Judi Dench, but also by David Suchet, Brian Bedford and Jonathan Hyde. 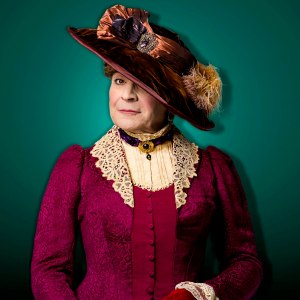