Treasures await Brontë fans this winter at the Morgan Library and Museum in New York. It’s one of my favorite spots to visit when in the Big Apple, and this is an exhibit not to be missed.

The East Room in the original library of financier J. Pierpont Morgan. Morgan was born in 1837 (ten years before the publication of “Jane Eyre”), and died in 1913 having assembled a world-class collection of books, drawings and manuscripts.

Shows at the Morgan always have material of the highest quality, and this one is no exception. They’ve got the original manuscript of Jane Eyre, on loan from the British Library.

“Jane, be still! Don’t struggle so like a wild frantic bird that is rending its own plumage in its desperation.” “I am no bird, and no net ensnares me; I am a free human being with an independent will, which I now exert to leave you.”

William Grimes, author of the New York Times article on the show, manages to mangle the context of this famous quote. He writes, “The exhibition’s subtitle comes from the pivotal chapter in “Jane Eyre” in which the heroine, although deeply in love with Mr. Rochester, the master of the house where she is a governess, spurns his proposal that she live with him, in effect, as his mistress.” (In fact, this is the scene where he proposes marriage, though it’s true that when she insists on leaving, Jane has not yet heard the magic words. After their abortive wedding, he does ask her to live as his mistress, and she runs away from Thornfield to escape the temptation.)

Another choice item is Branwell Brontë’s portrait of his three sisters. 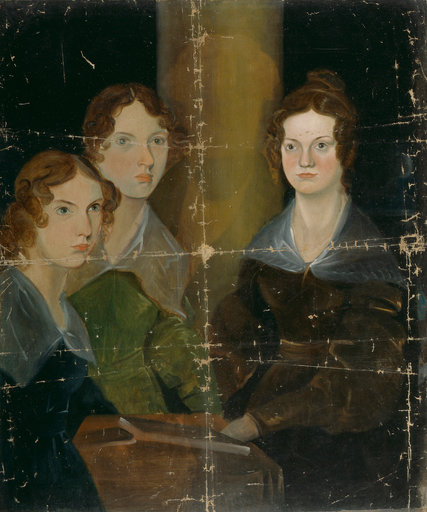 Branwell has painted himself out of the picture, just as he did in real life. Charlotte is the one on the right. Photo from the National Portrait Gallery, London.

As children, the Brontës developed elaborate fictional worlds and recorded them in a series of miniature manuscripts, of which the Morgan owns a selection. As a miniature collector, I am looking forward to seeing these.

The Brontës cast the Duke of Wellington and his two sons as the heroes in their fictional adventures. This tiny book is purportedly by “Lord Charles Wellesley,” who also “authored” some of Charlotte’s other stories. Photo: Morgan Library.

his brown complexion flushed with wine, & his broad chest heaving wildly as the breath issued in spurts from his distended nostrils, while I watched the fluttering of his white shirt ruffles starting through the more than half-unbuttoned waistcoat, & beheld the expression of his Arabian countenance savagely exulting even in sleep

Brontë did not permit herself this freedom in her published work, but it makes for fascinating reading. Photo is a detail from the Morgan website; click for source.

The exhibit also includes an unexpected bonus, one of Charlotte’s dresses. It’s a chance to stand beside her, in a way. A brilliant intellect and a powerful will inhabited that tiny frame, only four feet nine inches tall.

The show runs through January 2.

22 thoughts on “An Independent Will: Charlotte Brontë at the Morgan”