Near the top of the list of places I want to visit is Co. Antrim in Northern Ireland, where nine picturesque valleys, known as the Glens of Antrim, line the dramatic coast. It’s a place of wildflowers, waterfalls, cliffs, ancient ring forts, and fairies. 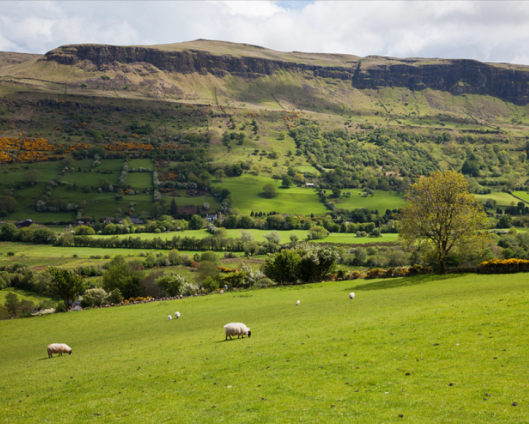 Glenariff, the Queen of the glens, is the largest of the nine. Photo Jonathan Tweed, Creative Commons license.

Deichtire opened the door to find her father on the doorstep with a small bundle in his arms. The bundle emitted a loud, angry noise. Súaltam came up behind her.

“Cathbad, is this our son? Let me see him.” Smiling, he took the bundle and opened the soft blanket to reveal the infant’s body, naked except for the amulet string that looped across his chest and over one shoulder. It held a white stone bead shaped like a horn, a small bell, and an herb pouch. “He’s strong! Look at him kicking!”

The squalling continued. “Let me take him,” she said. “Have you fed him on the journey, Father?” The heart fluttered within her as she received the small yet weighty body in her arms. Our son. His head was covered with black hair, his face was red, and his eyes were screwed shut.

“I had a flask of milk and honey, which he sucked from a piece of felt when we stopped for a rest,” said Cathbad. “But he was tetchy the whole way. Have you a wet nurse here?”

“Yes, one of our tenants.” She was still looking down at him, rocking him back and forth a little, when suddenly he opened his eyes, regarding her intently. The eyes were many-colored, blue and green, with gold flecks. Deichtire was surprised; every other newborn she’d seen had possessed blue eyes, which only slowly turned green, grey, or very rarely, brown. The child couldn’t be older than a week or two, as he still had the stump of cord at his navel, a reminder of his unknown mother. Her father had informed them that he was bringing their long-desired child, but he refused to divulge the infant’s origins.

She left the men to talk and took the babe to the hastily-prepared nursery, where Fearbán was waiting; her six-month-old son Ailín lay nearby in a cot.

“Is this the wee darlin’ now? And hungry, I expect.” The nurse pulled up her smock to reveal a heavy, swollen breast, and Deichtire handed her the infant. He was already rooting, turning his face this way and that, his little mouth making sucking motions, his eyes still wide open. He clamped onto the nipple with great force, and the strange eyes closed in satisfaction.

“There now,” said Fearbán. “He knows the way, don’t he just.” Deichtire watched her son feed, envious that she was unable to nourish him herself. When he was full, Fearbán showed her how to swaddle him, and they laid him in his own princely bed, with its intricate painted carvings of twining leaves and flowers. This had been Súaltam’s first bed, and had stood in a corner unused, but hardly forgotten, all the years of their marriage.

When she returned to the hall, Súaltam and Cathbad were discussing names. “Fergus, perhaps,” said her husband. “So he’ll grow in manly strength.” Her father shook his head and Súaltam rubbed his chin in thought. “He could be called Conchobar, a kingly name after all.”

“The hound lover? No, no,” said Cathbad. “A fine name, but somehow not right for this lad. Better Eochaidh, the horseman.” They both looked up as she approached. “How fares my son?” asked Súaltam.

“Our son, you mean,” she answered calmly. “He is well. Nurse said he knew his way to the teat.” Both men chuckled, construing a meaning she hadn’t intended.

“Sétanta,” exclaimed Cathbad. “The one who knows his way.”

Súaltam nodded, pleased. “Sétanta mac Súaltam shall be his name.”

Notes: I had a bit of fun devising an origin story for the name Sétanta, which is Cúchulainn’s given name.

Sétanta’s amulet string is my idea, but I have no doubt that if he was a historical person, he wore amulets as an infant, and perhaps as an adult too. Cultures the world over protect babies from harm this way. Ancient Greek children wore amulet strings draped over one shoulder and protectively across the chest, so that’s what I gave Sétanta. 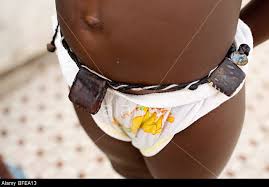 A baby in Senegal wears an amulet string around the waist.