If you’re like me, anything to do with ancient Egypt grabs your attention. And when the charms of Egypt and Greece are combined, I am utterly smitten. The reality of studying Greek papyri is hours upon hours of tedious, eye-straining work. And yet, there is a romance to the finding and deciphering of these scraps from the deep past. Like a message in a bottle, each one has improbably survived great forces of destruction over millennia. Whether the “message” is a shopping list, a poem or a royal decree, the fact of its continuing existence makes it profound.

Bernard Grenfell and Arthur Hunt of the Egypt Exploration Society, at Oxyrhynchus circa 1896. Photo: Wikipedia.

Jennet was amazed that after four hours of extremely curt, businesslike exchanges over the last two days, Sebelius had suddenly tried to make conversation, and had gone so far as to ask her for a favor. She didn’t expect his papyrus to amount to much. It was probably one of those wretched souvenir reproductions that people brought back from Egypt thinking they were real. She hoped he wouldn’t be too disappointed —or worse, affronted— when she gave him the bad news. But she’d taken a mischievous pleasure in making him come to Revels with her on a Friday evening. He was obviously reluctant. Was it because he could barely stand the sight of her? Or because he didn’t want to be seen socializing with a woman? She didn’t believe for a minute that he had any other plans. He wanted a good excuse to escape if the meal went on too long, or the talk got too personal.

All the booths were taken, and they sat in the middle of the room at a table for two, drawing more than a few curious stares. Jennet could hear the buzz reverberating across the bar, and the sibilant echoes of people saying his name. Sebelius looked extremely uncomfortable, and she began to regret putting him in this situation.

“If you’re really pressed for time, you don’t have to stay,” she said. “We can chat another day, or you can send me an email, if you like.”

He looked tempted for a moment, but then his expression changed and he returned her gaze steadily. “No, this is fine. In fact, I think I’ll order some dinner. I never eat lunch, and I get hungry this time of day too.” He kept his eyes on the table, and she had the feeling he was resolutely avoiding looking around at the expressions of the other patrons. She ordered a draft Guinness and a Mo-Fo burger, which was the house specialty, a double cheeseburger with bacon. His lips curved into a surprised little smile as he heard her selection, and he asked for the same. They both got fries. She waited in silence for their beers to arrive, then raised her glass slightly in his direction, and sampled the creamy head on the Guinness before saying, “Okay. Tell me about the papyrus.”

“It belonged to my great-grandfather,” he began. “He was a bishop in the Evangelical Lutheran church, in Minnesota. He had an interest in antiquities, and he subscribed to something called the Egypt Exploration Society. Do you know about that?”

“Oh yes,” said Jennet. “That’s the group that financed the excavation of Oxyrhynchus by Grenfell and Hunt, around the turn of the century. The greatest single excavation site for ancient Greek papyri. All found in the city garbage dump,” she added with a smile. “The Society is still operating, as a matter of fact.”

He nodded. “After they finished the excavations and published what they found, they rewarded the donors by sending them papyri. My great-grandfather received three or four Oxyrhynchus papyri. They were contracts of some kind. Land deeds, maybe.”

Jennet was stunned. There was a good chance, she now realized, that Sebelius’ papyrus was genuine. But why isn’t it already published? Their burgers arrived, and she took a bite of hers in silence, looking up at his face. His blue eyes, usually cool and icy, seemed a deeper shade of blue in the shadowy atmosphere of Revels.

“The Oxyrhynchus items were sold off at his death,” continued Sebelius. “But there was another document, one that was listed in his will but unidentified. He left instructions for it to be burned, but my grandfather refused to carry out his wishes. He kept the document himself, and when he died twenty years ago, he left it to me. That’s all I know about it,” he finished.

The temperature in Revels was warm, and looking into his eyes made Jennet feel uncomfortably hot. She pulled off her blue sweater and draped it over the back of her chair, then drank deeply from her cool Guinness. His gaze dropped to her breasts and then back up to her face. She was wearing one of her low V-neck tops, and it occurred to her that Sebelius might find the display of bare skin objectionable. At this point, buddy, that’s your problem. “Tell me what it looks like,” she said.

“It’s about seven by eight inches, with big margins, and the letters are evenly spaced. The bottom of it is broken off, and uneven.”

“Is the handwriting professional-looking or messy?” she asked, eager to know more.

“I’m not sure. I haven’t looked at it in a long time,” he said. “But when I inherited it, I remember thinking that it was beautiful, so my guess would be professional.”

They both worked on their burgers for a few minutes, and then she said, “It sounds promising, but of course I’d have to see it. Why do you think your great-grandfather wanted it burned?”

He shrugged. “I don’t know. Maybe it has something obscene in it.” He laughed. “Classical literature is full of dirty stuff, so that was always my guess. After all, he was a bishop.” He looked more relaxed now, though she noticed that his eyes kept straying to her chest. He’s heterosexual, all right. She studied him, noticing the slightly brownish line of the scar on his fine, clear skin, which was quite pale— apparently he did most of his exercise indoors, just as she did. His big hands were appealing, and somehow familiar. Her glance shifted to his right hand as he picked up a couple of fries and dipped them in ketchup. She had slim fingers too, with the nails cut neatly down to the quick, just like his.

They continued the meal in companionable silence, but as soon as they paid their checks, Sebelius cleared his throat. “I should be going. It’s almost time for my other appointment.”

She looked up coolly as he stood. “Okay. I’d love to see your papyrus some time.” And that’s not all I’d like to see, she thought, savoring the view from behind as he hurried out the door.

Walking to his car, Sebelius marveled at the fact that he’d just eaten dinner with the Woman, in front of the assembled community of Parnell, and the sky hadn’t fallen. Of course, they were all dying to know what was going on. He’d noticed more than one colleague smirking at him when they came in. Thomas Regan, a member of the Rhetoric faction, had worn an especially annoying expression on his face. Regan was eternally fascinated by, and seemingly envious of the fact that Sebelius attracted a good deal of unwanted female attention. When he first arrived at Parnell, he’d said to Sebelius knowingly, “I’ve seen all those girls that come to your World Lit class. Must be great to have all that pussy at your feet, eh? Maybe I should start wearing puffy shirts too.”

“Fuck you, Regan,” Sebelius had said, and not in a particularly friendly way. He was revolted by the man’s insinuations.

They’re all dying to know what’s going on, he reflected, but I don’t even know myself. The Woman didn’t seem to be after him. She didn’t simper flirtatiously and try to catch his eye. He was all too familiar with the look they got when they were hoping to snare him. Still, she was dangerous and he ought to keep his distance. He would trust her when Hell froze over. On the other hand, it was a good opportunity to solve the longstanding mystery of the papyrus. His father, now seventy-five and in a retirement home in Philly, would be so pleased if he brought news about the papyrus. He would visit Dad this weekend. He’d missed last week and felt guilty about it.

Driving home, he allowed his mind to wander back to the dinner. The Woman had removed her shapeless blue sweater to reveal a low-cut top. Her tits were mostly hidden just below the neckline, but he could see the round swell of each, and a shadow between them. He imagined her pulling the top over her head to reveal her bra, and taking his hand to lead him into the bedroom… Christ! He’d almost gone over the center line. What the fuck are you doing? he asked himself furiously. For the rest of the way home, he kept his mind on his father and what he could bring him in the way of new reading material.

Notes: Jonathan isn’t based on Mr. H., but I couldn’t resist adding a few H-inspired touches to the story. The sexual fantasy he has whilst driving home is borrowed from a very similar scene in Conor McPherson’s supernatural tale, The Eclipse. Here are screen caps of the sequence: 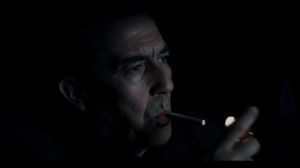