Universities are full of subjects which have vast appeal for dedicated students, but cause everyone else’s eyes to glaze over. Limnology. Differential calculus. Latin prosody. Alchemy. Adam Sandler. Yes, in my institution they actually teach a class about Adam Sandler. (I await in breathless anticipation the results of our next accreditation review.) Now in my opinion, the study of actors ought to be left to the really knowledgeable people: the fans. Indeed, to misquote one of my favorite poets, the Proper Study of Fankind is the Man. Herewith I present a mini-tutorial on Ciarán Hinds, at the introductory level. (In search of graduate study? You had better visit ciaranhinds.eu.)

Welcome to Fanniversity! (If you’re giggling over the term, see here.)

Like all educational institutions, Fanniversity is full of examinations. Your first exam will be a Ciaránoscopy. (I know, “It’s waaaay better than a colonoscopy” is not exactly a ringing endorsement. But trust me. This won’t involve gazing at Uranus.)

Ciaránoscopy: Kindergarten Level. One of these cuddly creatures is Mr. Hinds smoking a cigar. Which is it?

This lesson illustrates the Goldilocks Axiom. The gorilla is not cuddly enough. The hyrax is too cuddly. The fellow in the middle picture is just right!

Ciaránatomy: A very esoteric subject, and quite controversial. Some fans disclaim any interest in the topic. Mr. Hinds himself has said that “for the sanity of everyone involved” it is best that he not follow the example of most of the cast of Game of Thrones by getting nekkid. Still, some avidly pursue the topic, purely for scientific purposes of course.

From left: Dick Koosman in “Margot at the Wedding,” Bud Hammond in “Political Animals” and the famed pursed lips expression (also seen on Julius Caesar in “Rome”).

Ciaránistics: For academics and fans alike, there is no such thing as TMD (Too Much Data). About the career, that is. Even for a fan, Some Things Must Remain Inviolate.

Productivity measured by number of projects over the past 25 years. TV episodes are counted individually. Click for a larger, readable version of the chart.

Most feature films in a year: 2011 (Harry Potter and the Deathly Hallows, The Debt, The Rite, Tinker Tailor Soldier Spy, Salvation Boulevard)

Hindsian Chemistry: He “connects” with almost every leading lady, but we all have our favorites.

From left: with Frances McDormand in “Miss Pettigrew Lives for a Day”; with Kelly Reilly in “Above Suspicion”; with Sinéad Cusack in Conor McPherson’s “The Birds”

And then there are the near-misses. 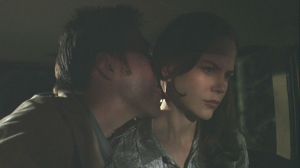 Licking Nicole Kidman’s neck in “Margot at the Wedding.” According to Mr. H. “it’s a tough job but someone’s got to do it.”

Digital Ciaránana: Some enterprising scientists have taught a computer to mimic Mr. Hinds using word cloud technology. It turns out that his favorite words are delicate (used as a term of approval), connection, and journey. He often compares ensemble acting to music. The program produced these sample “comments” on a new project:

The script: It was very delicate and and mysterious, a chamber piece.
The director: Like a great conductor listening to the instruments warming up.
The writer: He wanted it to be somehow real, this journey that we have through life.
The co-star: She’s such an extraordinary actress and person.
The casting: You never really know why they choose you, but there must be some sort of connection.

Masculinity Studies: Interest centers around the disconnect between his typical screen persona (Badass Macho Alpha Male) and his actual personality (pictured at right).

Left: the angry boss in “McCanick” and Inspector Pochon from “The Statement”

Comparative Gender Chronology: During his career, Mr. H. has been paired onstage and onscreen with many talented women. I am particularly pleased that he has worked with several beautiful women who are older than he is: Helen Mirren, Lindsay Duncan, Sigourney Weaver, Sinéad Cusack. The dips in the red line show the younger women relative to his age. Leading ladies with the biggest age difference (both 24 years) are Samantha Morton and Kelly Reilly. 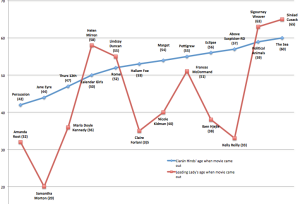 Last but not least, the Department of Unrestrained Pedantry and Rampaging Trivia have prepared a Final Examination for you.

Match the photos to the following immortal words:

From left: “Above Suspicion,” “The Night Alive,” “Ivanhoe,” “Political Animals”

Ah, so much to learn, and so little time. We didn’t even get to delve into the fascinating topic of Ciaránic Pogonotrophology (the identification of the Picture of the Day by the State of the Beard.) Still, I hope you have enjoyed this little foray into Ciaránology. Himself, by the way, was this year the recipient of an honorary doctorate from Queens University Belfast, where he studied law before being gently advised to try acting instead.

“I’m the slowest graduate in Christendom,” he said.