Q: What do Brendan Gleeson and Bryan Ferry have in common?

Clotheshorse, Roxy Music frontman and all-around sexy guy Bryan Ferry. “More Than This” is a song for the ages, but he’s a bit of an asshole when it comes to fox-hunting…

A. They both seem to have an inexhaustible supply of sons.

Bryan’s sons are (amusingly) named Otis, Isaac, Tara, and Merlin. Although Ferry is English, he bears an Irish surname, which perhaps explains the Celtic flavor of Tara and Merlin. Otis is no doubt a tribute to the great Otis Redding.

Ferry accepts a CBE from the Queen accompanied by his sons (from left) Merlin, Isaac, Tara, and Otis. I like the broodingly handsome Isaac best!

Irish actor Brendan Gleeson is perhaps best known for his role as “Mad-Eye Moody” in the Harry Potter movies, but you may have seen him in Braveheart, Gangs of New York, or The Guard. He too has sired four sons: Domhnall, Bríain, Fergus and Rúairí. 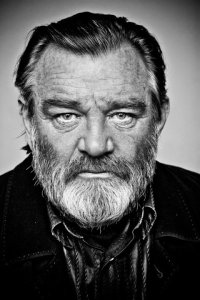 Brendan is at his best in this head shot. He made an excellent Menelaus in “Troy.”

Here we have Brendan with the two sons who are also actors, Domhnall (right) and Bríain (center). Domhnall played Bill Weasley in the Harry Potter movies and has acted in several other Hollywood films, including the romantic comedy-drama About Time, helmed by Richard Curtis, and the Coen brothers’ True Grit. Bríain’s career has been more focused on Irish productions such as the rom-com Stand By and the TV series Love/Hate. Notably, he played the psychotic, hammer-wielding Kenneth in the debut production of Conor McPherson’s play The Night Alive.

Brendan with his two ginger bearded boys. Maybe all of them are! Image from What’s Onstage.com has since been removed from their site.

I can’t end this post on sons without mentioning that Brendan now has a very recognizable cinematic son. He plays Michael Fassbender’s father in Trespass Against Us, a thriller about an Irish outlaw. It’s currently in post-production. 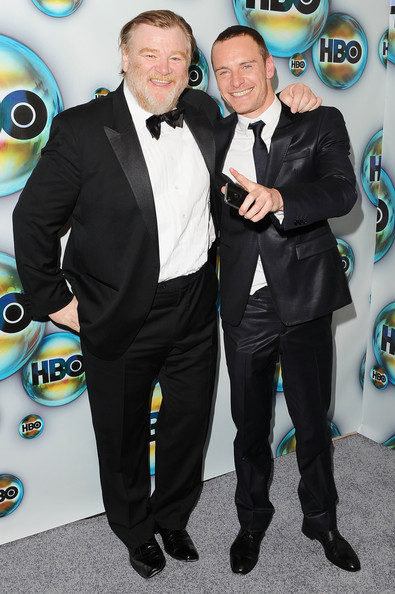 Aww, aren’t they cute in their dinner jackets?