Lynn spends another night beside West. Will they or won’t they? 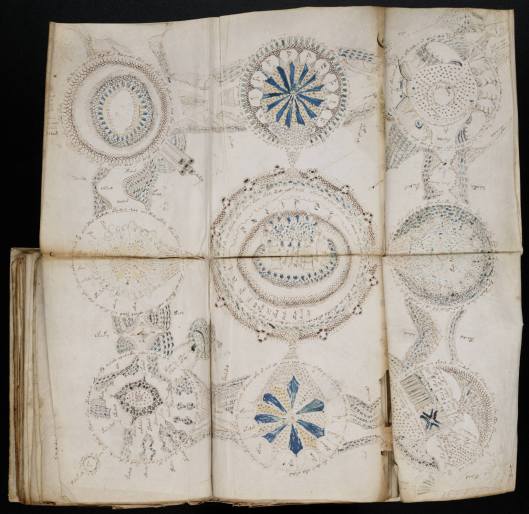 A foldout page with complex patterns in the Voynich manuscript. Some of them resemble diatoms and other organisms one might see under a microscope. Source: The Voynich Gallery.

Lynn fell asleep surprisingly quickly, perhaps due to the aftereffects of the adrenalin rush from the confrontation with Mazarin. She awoke during the night to find that, once again, she had migrated close to West, snuggling her head beneath his armpit and pressing her behind against his side as he lay on his back. His arm, meanwhile, was extended across her side of the bed, behind her pillow, but he didn’t seem to be awake. Her eyes had adjusted to the dark now, and the skies had cleared to allow the light of the moon into the room. She could see his face as he slept. He looked younger, almost boyish, and his hair was mussed. Her eyes wandered lower, past his chest in the tight undershirt and down to his crotch. It looked as though he had an erection, and rather a generous one. She knew that men got erections while they slept, in a sort of cycle during the night. It was normal. She wondered what he was dreaming about.

She got up as quietly as she could to use the bathroom. Hmm. To flush or not to flush? Richard had been something of an environmentalist, and keen on water conservation, so while they were married, she never flushed the toilet until morning. But she had always disliked finding a toilet full of yellow water and used paper. This is all so embarrassing! Finally she decided to flush, and the noise sounded very loudly in her ears. Returning to the bed, she saw that West’s eyes were open.

“I woke you. Sorry,” she whispered. He was silent. Lynn got in bed and turned her back to him, acutely aware of his large, warm presence beside her. She had to admit that this was better than shivering alone in her room, terrified that Mazarin or his brother might enter to conduct a further interrogation about the key. She hadn’t felt the simple satisfaction of sleeping beside a man in four years. For that, at least, she was thankful to West, in spite of his peculiarities. As she was drifting off, she suddenly felt him shift and roll onto his side, so that his body fit around hers, almost but not quite touching her. Knowing that he was just behind her, that his pelvis was only an inch or two from her rear end, was highly arousing. She felt a pleasurable heat gathering between her legs, and her mind rehearsed over and over the sensations she would feel if he pressed up against her, hard and ready… Oh god. Stop. She forced herself to think of her department, and all the tedious tasks waiting for her when she returned to work. Finally, after a grim half hour of determined mental discipline, which included counting fluffy sheep that wore the faces of all her colleagues, she once more fell asleep.

When she awoke, he was already up, dressed in the first casual outfit she’d seen on him, a pair of chinos and a flattering polo shirt in navy blue. As she rubbed her eyes and looked up blearily, he pulled a small tote from his valise and said, “I’m going to get us some breakfast. Don’t open the door until you hear me knock one, two, three.” He sounded more cheerful this morning. She wondered glumly what she must look like, with her hair a mess and her eyes puffy from the late night. Rising, she quickly performed some minimal ablutions and put on a pink shift dress with a white sweater and sandals. Girly clothes, chosen by Samantha, but her options were limited and she didn’t feel like wearing a suit. She packed her things and put her suitcase and carryon by the door with her handbag.

Soon thereafter, he knocked once, twice, and then three times, and she opened the door to him. He came in holding two coffee mugs in one big hand, and drew from the tote several croissants, a couple of muffins, a hunk of cheese, and a tiny tub of Nutella with a foil top. He seemed surprised that she was already dressed, and she saw him glance approvingly at her packed luggage. Was he used to women who took two hours to get ready? They ate their breakfast in companionable silence, sharing the cheese and the dab of Nutella, and then he picked up both the heavier suitcases.

“Car’s back,” he said, and jerking his head toward their two carryons: “Can you get these?” They hurried down the stairs, seeing only one other conferencegoer, who looked surprised at the sight of their luggage. “Professor Melton has had a family emergency,” said West in a voice that did not invite discussion, “and I’m driving her to Rouen. Please make our excuses.”

Lynn waited with the bags while he went to the garage to get the car. He drove up in a red Citroën C1 supermini. It was a car she would have liked to own, though as he got out in order to help her load the bags, she had to stifle a laugh at the incongruity between his large size and the diminutive vehicle.

Notes: Sleeping (and waking) with another person creates its own sense of intimacy, regardless of whether sex is involved. In this case, sex is very much involved, even if “nothing” happened.

As an American, I always notice the relatively small size of the cars and trucks in Europe. They look like toy vehicles compared to the monstrous gas-guzzlers we have here. Thankfully our national obsession with SUV’s has begun to fade, and one occasionally spots a Smart car or Mini Cooper on the road. You have to be courageous to drive one here, amongst all the giants…

5 thoughts on “The Voynich Affair: Chapter 9”