Leaf 16 verso, detail. Original image from the Voynich Gallery of the Beinecke Library.

Not long after Lynn’s decision to attend the symposium, she and Samantha ate at El Trovador with Laura and her new husband James. Lynn had been surprised and happy for Laura when she saw what a handsome and undeniably sexy man James was. Laura was so introverted that she had never been married before, and her opportunities to meet men had hardly been abundant. Neither are mine, more’s the pity, thought Lynn.

Laura was the one who suggested the meal, excited at the thought of a new option for dinner in the small college town of Parnell. El Trovador turned out to be a cut above the standard Mexican place, with lots of meatless options that thrilled the vegetarian Laura and Samantha, and the near-vegetarian Lynn. For his part, James ordered carne asada, but the table was otherwise filled with jalapeño and cheese tamales, black beans and rice, and plantains roasted with brown sugar, plus the obligatory thin tortilla chips with plenty of cilantro-laden salsa. Samantha drank Diet Coke and James drank Corona, while Lynn and Laura indulged their taste for tequila with shots of Don Eduardo Silver preceded by salt and followed up with lime.

“I’m going to make tamales at home,” said Laura. “I got some nixmatal, which is the precursor of masa. You can use it to make posole, tortillas or tamales. But I think what I have is too coarse. It needs to be pounded and ground down some more until it’s a fine flour.”

“These are the best tamales I’ve ever had,” said Lynn, peeling the corn husk off another fat, cigar-shaped cylinder of masa dough. “Are they hard to make at home?”

“Well, you have to spend a lot of time rolling them, and then you steam them in a big pot for forty minutes. It can be a major project. But I don’t bother with corn husks. I just use parchment paper,” said Laura, draining her tequila. “You know what?” she added contemplatively. “I want to be waterboarded in tequila.” James scrutinized her as she said this, and then looked down at the second empty shot glass by her plate. At least one other glass had already been cleared away. “How many of these have you had, love?” he asked her. Laura laughed and shrugged at Lynn, who was still only on her second shot.

When their server stopped by the table to pick up the shot glasses, Laura gave him a big smile and said, “Another, please.”

“Belay that,” said James, shaking his head at the server. “And as for you…” he said to Laura, then pointed at her almost untouched water glass. “Drink.”

“You’re a spoilsport,” said Laura. “You’re not entering into the spirit of the thing.”

“I think you’ve entered into the spirits quite enough for both of us,” he said. “We ought to be going soon.”

Laura said, “All right. We can go. But only if you promise to pound my masa when we get home.” James looked a little embarrassed and gave Lynn and Samantha an apologetic smile, but as soon as they’d said their goodbyes, he escorted Laura to the door, whispering in her ear and making her giggle. His hand hovered possessively over her rear end.

“About time those two got a room,” said Samantha, shaking her head.

“Yeah, he’s incredibly hot for such an old guy.”

Lynn made no reply to this. James was in his fifties and must seem ancient to Samantha. But to her, he looked just right. She had to admit that she felt envious.

“You know what, Aunt Lynn?” said Samantha. “You need a boyfriend.”

To find something special for the symposium, Samantha took Lynn to the studio of Tamsin Cho, a fashion designer in Philadelphia. Tamsin specialized in suits and had several basic designs from which to choose. Once the customer selected the style and fabric, the suits were fabricated under Tamsin’s supervision by a network of local seamstresses recruited from the custom garment industry in Hong Kong.

Tamsin was delighted to work with someone as tall as Lynn. “Most of my customers are more mature women shaped like dumplings,” she said as she took Lynn’s measurements. “My favorite suit pattern is one that nobody ever selects, because it works best on a taller woman.” The skirt had a higher waist than she was used to, and it was long and fitted, falling below the knee. The jacket fit snugly over the waist and hips, and had a little padding in the shoulders.

“This is great on you,” said Sam. “The shape emphasizes your curves. You’ll look like Hildy Johnson from His Girl Friday! Any chance you’d consider wearing a hat?” 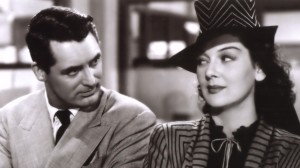 “Okay,” said Sam, disappointed. “Well, wear the jacket without a blouse. Just a camisole underneath. And a choker necklace. We’ll stop at Trousseau to find a silk camisole. Everything you pack for the trip should be of the finest quality.”

“Oh? And how much will this suit cost me?”

Seeing Lynn’s expression, Sam hastily added, “And an incredible bargain. Wait till you see all the handwork and details on the finished product. You’ll be able to wear this forever.”

“Assuming I never gain or lose any weight,” said Lynn.

“No, Tamsin can alter it if you do.” Lynn wondered how much that would cost, but acquiesced. She knew Sam had exquisite taste. At Trousseau they found a sapphire blue camisole, and Sam insisted that Lynn buy all new lingerie, as well as two cotton lawn nightgowns with feminine cap sleeves and tiny mother of pearl buttons down the front. Next they went to Lloyd’s, the finest department store in Philly, where Lynn bought three pairs of heels, a pantsuit with trouser hems long enough to complement her heels, and a “Grand Entrance Dress.” Sam decreed that when Lynn arrived at the chateau, she must be wearing something stunning.

“You were thinking of putting on a track suit and wearing your hair in a ponytail, weren’t you?” she accused.

“No hoodies on this trip. You have to know at all times that you’re dressed in beautiful clothes. You’ll be in France, for heavens’ sake! We’ll find something gorgeous and comfortable, that won’t wrinkle while you’re sitting on the train. And you should put your hair in a chignon.”

Eventually they found a double-breasted coat dress in navy with short sleeves, white buttons and a wide belt. “Omigod,” said Sam. “Look at this hat! You have to have this!” It was a wide-brimmed straw picture hat with a low crown, in navy. “With your silver hair, it’ll be stunning.”

“You won’t when you get there. Just wear it when you walk in the door of the chateau. That’s all I ask. And a pair of short white gloves.”

Lynn decided to humor Sam, though she winced at the price tag on the hat. “Can’t I have anything comfortable?” she said. “What about sightseeing? Heels are out of the question for that.”

“One pair of non-denim capris with Skechers,” decided Sam. “Pink or powder blue. And some cute white blouses. No T-shirts.”

“It’s not as though I’m trying to impress a man,” said Lynn.

Sam turned to her with a confident look. “Oh yes, you are. You just don’t know it yet.”

Notes: Sadly, I do not have a Sam to advise me on my wardrobe, or a Tamsin to sew it. (This is a story of fantasies fulfilled.) The ritual dressing of the Heroine before she goes forth to encounter her Man is a perennial, even mythic theme in fiction, from the Homeric Hymn to Aphrodite to Cinderella to My Big Fat Greek Wedding.

“Lloyd’s” is the same department store in Philadelphia where Cynthia went to get her party dress in Opération Séduction. It’s based on Boyd’s, a very posh store on Rittenhouse Square. Most of my heroines visit Lloyd’s at one time or another to buy something special, but Sam has even more exclusive connections.

“Really hot for such an old guy” is a comment I often see online from younger ladies, who apply it to a certain charismatic Actor.

11 thoughts on “The Voynich Affair: Chapter 3”