When I wrote this chapter, I was preoccupied with the question of whether a romantic hero can do something really bad and still be love-able. I concluded that it depends on a number of factors, but yes, it is possible. After all, Mr. Rochester was cruel, arrogant, deceitful, and would have turned Jane into a Fallen Woman, if he had had his way. Yet she still loved him, and so do we.

The story so far:
Chapter 1: Lynn Melton, English professor, is in dire need of a gentleman friend.
Chapter 2: A mysterious manuscript and a contentious listserv.
Chapter 3: Lynn buys clothes for France with the help of her fashionable stepdaughter.
Chapter 4: Encounter with a handsome but brusque stranger on a plane.
Chapter 5: Lynn finds an enigmatic gold key belonging to none other than T. C. West.

Lynn ascended the stairs together with a group of other guests, concerned that West might try to approach her in the hallway. As she was about to open the door to her room, she remembered the lack of electric lighting. The daylight was long gone, and though the moon was nearly full, it was overcast outside. She wouldn’t be able to examine the key closely once she went in, yet she felt an intense curiosity to see it again. Glancing around nervously, she quickly drew it from her bra and held it up to one of the bright lamps that illuminated the hallway. It had a heart-shaped hole in the haft, and the writing looked familiar. It was the script used in the Voynich document. As she was staring at it, feeling the warmth of her own body heat radiating from the golden metal, footsteps sounded on the stairs and she tensed, ready to dart into her room. It was not West, however, but Georges Mazarin, who passed quietly by with a nod and a murmured “Bonne nuit, Madame.”

Once in her room, she locked the door behind her, took a few deep breaths and sat on the bed, going over the day’s events in her mind. What had possessed her to do something so rash? Admittedly, she’d derived a strange thrill from provoking West, but the key was his property. She would return it to him first thing tomorrow. And apologize. Maybe.

Mindful of his words about her door lock, she picked up the chair from her vanity and wedged it under the knob. That ought to do it. But did West make a habit of picking locks? Perhaps he’d gained some knowledge of security from his job as Curator of the Hopkins Collection. Foregoing a trip to the ladies’ bath down the hall, she decided to go straight to bed. She’d kept the key securely in her hand all this time, and now she felt for the hole in the haft. Groping in her jewelry bag, she found a thin gold chain, strung the key onto it, then clasped it around her neck and donned one of her new cotton gowns with mother of pearl buttons. The golden key once again nestled comfortably between her breasts, almost as though it belonged there. She lay in bed, thinking about West and grateful for the fresh evening breezes that wafted in delicate scents from the garden. The air was just cool enough to lull her to sleep in spite of the evening’s disturbing events.

Her dreams were disjointed and by turns frightening and intensely pleasurable. First she dreamed that someone was prowling the room. She was about to open her eyes, hoping and simultaneously dreading that it was West. Then the intruder was cradling her head in his arms, and she couldn’t move, even though she wanted to. Her nostrils were filled with an odd scent. She experienced alarm, and then a hypnotic sensation of floating, as though her body was in a tank of water.

After a time she felt him unbuttoning her gown slowly, very slowly. He slid his fingertips lightly over her breasts, caressing their outer edges, and now applying more pressure, running his palms firmly over her as a potter might do with the clay on his wheel. She squirmed and moaned a little, not wanting him to stop. Now she lay half-reclining, supported against his chest and left arm, and he circled a thumb around her nipples, first the left, and then the right. He covered her left breast with his palm, his big hand extending over it like a starfish, and then slowly pulled it away until he was clasping the tip gently between his thumb and fingers. The sensations were not as vivid as they would have been were she awake, yet her body responded as the light caresses continued. Finally all was quiet, and the visitor was gone. She slept soundly until morning.

When she woke, she felt sluggish and it took her a few minutes to realize that the window sash was wide open, though she had raised it only a few inches the night before. There really had been someone in her room. Gasping, she put a hand to her chest. Her gown was unbuttoned, and both her necklace and the golden key were gone. She sat up. The chair was in its place at the vanity, no longer beneath the door handle. She went to examine the door, which was locked. Turning back to the bed, her heart pounding, she saw that a linen handkerchief had been spread carefully on the pillow beneath her head. It bore the initials T. C. W.

Lynn now realized that West was a dangerous man, perhaps even unhinged. She ought to have nothing more to do with him. Had the dream about him touching her breasts been real? Her face burned with shame at the thought that West might have seen and felt her scar. She ought to call the police and say that he had climbed up to her room and drugged her. What kind of a monster would do such a thing? But if she called the police, she’d have to explain that she had taken his key, and now her action seemed to her so childish that she didn’t want to own up to it. What if he denied everything? It was such an outlandish story. She had his handkerchief, but she could easily have obtained it in other ways. It would be his word against hers.

She resolved to lock her window from now on, and avoid West at all costs, even though she was curious about his strange golden key and its relationship to the Voynich manuscript. As she prepared for the day, she reflected sourly that West’s little exploit had seriously unsettled her on the very morning she was to deliver her paper. Undoubtedly he would be present at the session to gloat over his victory.

The first formal event of the day was scheduled for nine o’clock, when M. Mazarin wished to meet with the guests for an unspecified purpose. She dressed in her dark grey suit by Tamsin, with its long skirt that fitted her like a glove and its assertive jacket. Once she added her heels and silver jewelry, she felt more confident. Theophilus Clarence West was nothing to her, and she would not give him the satisfaction of ruining her time here. She was one of the first to enter the breakfast room, and she took two croissants and a cup of tea back to her room in order to avoid seeing West until it was absolutely necessary.

Downstairs, the symposium participants were still eating, but Lynn proceeded to the appointed meeting room, a luxurious library. The furnishings and décor were traditional, yet light and rococo in feel rather than heavy and dark. The peach-colored walls were lined with books on white shelving, and what looked like a large Boucher mythological painting of a naked Venus amid a train of plump, rosy amorini. A library table faced a group of chairs placed in rows for the guests. On the table was an object covered with a peach brocade cloth, with gold tassels at its four corners. As she stood at the back of the room, trying to decide where to sit, West came up beside her.

“How are you feeling?” he asked. “Any nausea this morning or last night? You ate very lightly at dinner, which was fortunate.”

“You were never in any danger,” he replied.

“Oh? And just exactly how do you know that?” she asked, incredulously. “What drug did you give me?”

“I let you inhale a very mild sedative. It’s a drug used for general anesthesia, but the amount you received was extremely small. In fact, I’d say you’re unusually sensitive. What do you weigh, 140?”

She was outraged at the question, especially as he had very nearly hit the mark. “That’s none of your business.”

“For your information, I’m an M.D., and I did my residency in anesthesiology.” She refused to look at him, and he put a hand under her chin to tilt it up. “That’s a year of surgical internship plus three years of specialized training.”

She jerked her chin to one side to move it away from his hand. “Obviously you left medicine quite a few years ago. What happened? Were you expelled for professional misconduct?” That stung him, she could tell.

“No, as a matter of fact. It’s true I only practice sporadically, but I’m still board-certified.”

“That doesn’t make any difference. What you did was vile.”

“I gave you two chances to return my property. You refused. I took back what was mine.”

“You took a little more than that.”

He raised an eyebrow. “No post-op amnesia? Surprising. In that case, perhaps you also recall that you were rather… appreciative of my efforts. After I recovered my property, I stayed for a while to make sure you didn’t have an allergic reaction.”

“I could have you de-certified very quickly, Doctor West.”

“Perhaps. But wouldn’t you rather find out what it feels like when you’re fully conscious?”

“Stay away from me.” She turned on her heel and marched away as the others began to come in from breakfast. The sound of his laugh echoed in her ears.

Notes: When it comes to sexuality, there is an important difference between fantasy and real life. Precisely because a fantasy is a piece of fiction under our control, we can enjoy things that would, in real life, be disturbingly out of control and frightening. When I wrote this, I was amazed at my liberal feminist self for having dreamed up such a politically incorrect fantasy. (As usual with my writing, the story began as a dream fragment involving the scene you have just read.)

But then I became fascinated by the questions it raised. Could Lynn ever trust West or love him, knowing what he’s capable of? I did not want to write a bit of erotica in a bubble, where the emotional consequences of the characters’ actions are extrinsic to the story. I wanted to delve a bit deeper than that.

Locks and keys have an obvious sexual symbolism, which I have made use of extensively in the story. But they also represent mysteries and puzzles. I wish I could find a real-life example of a key charm that looks like West’s key. I based it on my own bicycle lock and key. 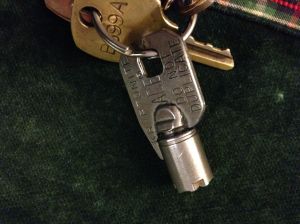 Imagine this, but golden, and with strange writing…

11 thoughts on “The Voynich Affair: Chapter 6”