One of my most precious possessions is this slim sketchbook that went with me to Rome a few years ago.

I come from a line of artists. My great-grandmother and grandmother were painters, and my mother is a painter too. I never learned to paint, nor had art lessons, but I always loved to draw. 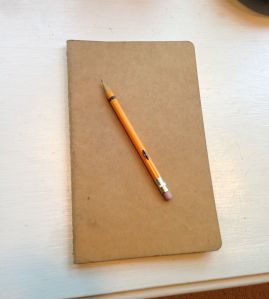 I chose my notebook carefully. I wanted something lightweight. I figured I would use it as a journal and maybe do a sketch now and then. I use mechanical pencils. No worries about sharpening, and they have good erasers, always a necessity for me!

My first efforts were tentative. I hadn’t drawn anything in years. This page is preceded by several pages of nothing but text, and my drawings are small and cramped. I’m afraid to try anything ambitious.

But then we went to the Etruscan cemetery of Cerveteri, and I started to loosen up. To draw one of the tombs, I took up a half-page!

Five pages later, I am much more confident. They would let us loose in a museum gallery, and I’d pick something to draw. It helped me see the objects, in the moment. I took photos too, some of the time, but I knew that I could find the objects in a book if necessary. Looking at the drawings years later, the objects come back to me in a way that no photograph could achieve.

This was a special day, viewing the archaic temples in the Forum Boarium. Stepping inside a Roman temple gives you an eerie feeling of walking back through layers of time.

The round temple of Hercules once held this gilded statue of the god. They found him, still in the Forum, in the fifteenth century. 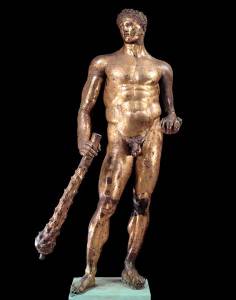 He now lives in the Capitoline Museum, where I discovered him. I worked for about twenty minutes, but never managed to get him quite right.

These drawings from the interior of the Augustan houses on the Palatine hill were done in a hurry. We didn’t have much time.

I found myself focusing on parts of figures, like the arm from a Hellenistic prince, or the hand of the weary boxer. People would come up to have a look at whatever I was working on. Sometimes the drawing meant that I didn’t get to look at everything. And sometimes I wasn’t in the mood to draw, so I took photos instead. 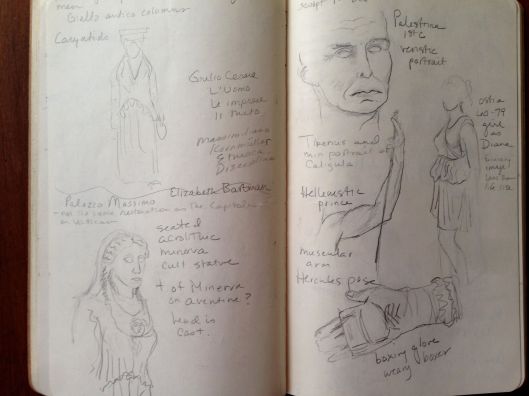 I have a thing about male hands! But they’re very difficult to draw.

I was used to drawing from photos or pictures. I discovered that drawing from life is harder in some ways, but it is also more satisfying. You can probably tell by now that my favorite subjects in Rome were human figures and architecture.

In the evenings, I used to come out to the courtyard of our lodgings and sketch the grotto maiden, who was definitely not an ancient piece! But I liked her, and I spent a lot of time trying to get her right. 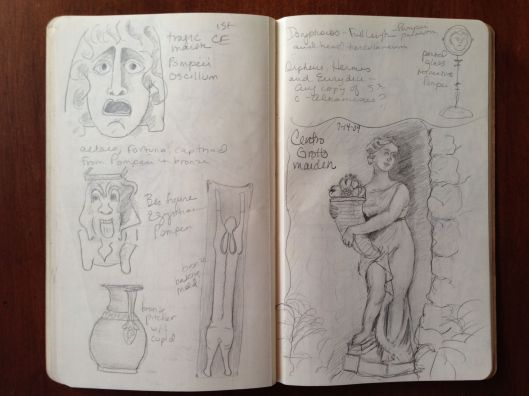 At the end of the trip, I have come a long way from those first pages. People would tell me “Oh, I could never do that.” But I always said that they could, if they tried. It’s amazing how much better you get with practice. 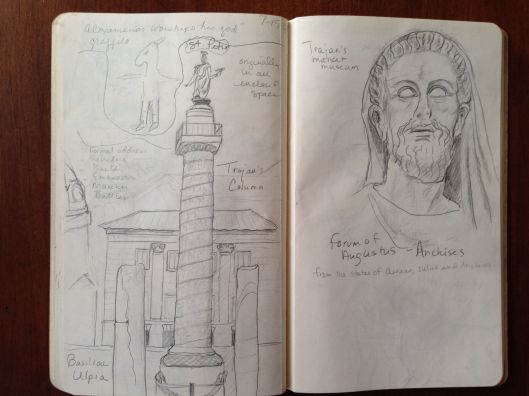 I’m glad I thought to take these pictures. If something should happen to my priceless book, I’ll still have the digital images.

33 thoughts on “My Rome Sketchbook”