When Ciarán Hinds is in a play, I like to create a souvenir of some kind, to mark the occasion and give out to other fans. I’ve done buttons (my favorite says “CHeeky Hinds Fan”), and for The Crucible, literary M&M’s.

This time around, Himself is in a Conor McPherson play based on the songbook of Bob Dylan. I tossed around lots of ideas (a keychain? a bracelet?), but the one I kept coming back to was something different. When I travel, I always record my thoughts about the trip in a journal, and for some reason, I conceived a powerful desire for a journal with “Girl From the North Country” on it.

The Old Vic’s design for the McPherson play.

Ideally it would look like the Old Vic’s logo for the play, but if I had that manufactured by a custom printer, it would be a copyright violation. Fair enough. What else could I do? It occurred to me that I could paint the letters on the journals with a stencil. The play is set at a guesthouse in Minnesota in the 1930s, during the Depression, so I thought that a “stencil” font (used to make do-it-yourself signs) would be appropriate. A “Stencil” typeface was first created in 1937, mimicking the look of the stencils used on boxes and crates, especially by the US Army. 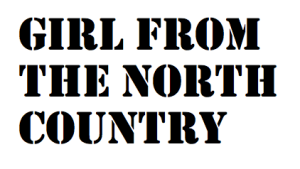 This is the title of the play/song in Stencil font.

The stencil look would be a great match for my favorite type of journal, the Moleskine with brown kraft covers. I’m addicted to these, and they have to be the plain brown ones, with blank pages for sketching, or ruled pages for writing. 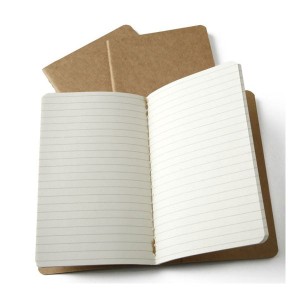 The Moleskine cahier, the 8 x 5 size. It’s a must-have for travel, light and slim, but big enough for serious writing.

I also had the inspiration of the signage at Superiority Burger in NYC, which adopted a deliberately low-tech, imperfect, vintage look for its storefront.

Smart and delicious vegan food. Note the smudged letters at the top.

First I tried to have someone cut me a stencil, but I quickly discovered that none of the companies who make stencils will do anything small enough to fit on an 8 x 5 notebook. I had no choice but to cut the stencil myself, so I looked at some videos online. How hard could it be? Um… a lot harder than I thought.

I should give fair warning here that this project was not my finest hour. I’m not particularly “handy” with crafts, except for beaded jewelry, which I can’t do much anymore because of deteriorating vision. I had little experience with Exacto knives, and zero with stenciling or spray paint. One might put a positive spin on the results by pointing out that that I now have enough Moleskin journals to last me the rest of my life, since I don’t expect that anyone else will want them. And I didn’t cut any of my fingers off. That part was good too.

I printed out the lettering, added some mailing labels to the back of the paper to make it a bit stiffer, and started cutting. (At least I had the sense to buy a small cutting mat, in order to save the surface of my desk.) It took me several days to arrive at the finished product, which had to be repaired in a couple of places where the really thin bits came loose. And I had to repeatedly sharpen my cheap-o Exacto knife, which got dull around the time I hit “THE.”

The finished stencil, after heavy use.

My original idea was to evoke the colors of the Old Vic logo, with a dark camouflage green in the background and red letters over that. What I ended up with was a sort of ghostly red lettering, fading in and out, over a battleship gray shade of Rustoleum.

Depending on the angle of the light, you may or may not be able to make out the letters. 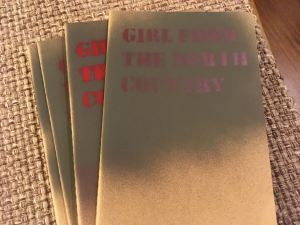 Too little paint, it barely shows up. Too much paint, it gets blurred. Nothing in between.

I decided to try some more without the dark background, hoping that the red paint would show up better. 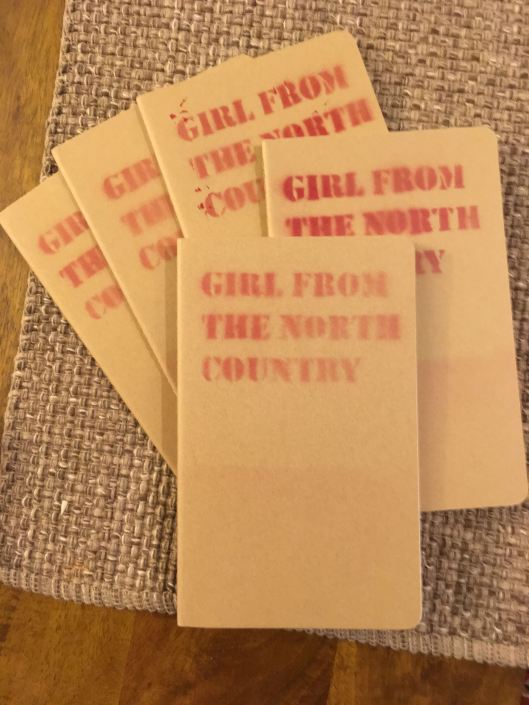 Moleskine Mark II. More legible, but not as interesting. And messy.

Again, it was really a matter of controlling the spray paint, since it tended to be either too faint or too dark, and it gets all over everything–even surfaces you think you have covered up. Probably I should have used some other kind of paint and applied it with a roller–the proper method. [Update: I tried this and it was an even worse disaster, with the letters completely smudged. Cheap roller? Paint too thick? I don’t know.]

Ehhhm. Tests with the roller resulted in a smudgy look…

(NB please resist the temptation to provide me with helpful advice, since I have no plans to do ANY stencil projects EVER AGAIN.)

This project gave me food for thought on the space between having a good idea and being able to execute it. Creativity is not the whole story–you also need technical skill. But then again, sometimes the point of a creative act lies less in the product than in the doing.

Don’t even ask me how this happened.

20 thoughts on “Girl From the North Country: Fan Fun”