“My job is to show folks there’s a lot of good music in this world, and if used right it may help to save the planet.” 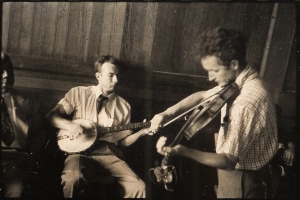 Pete Seeger and Woodie Guthrie at an informal concert in July 1950. Photo by Leonard Rosenberg. Click for a gallery of shots from this concert (ideastream.org)

I’ve been worried for some time now that Pete Seeger might die. I suppose he couldn’t live forever, but I wanted him to be there always, insisting that the audience sing along to “If I Had a Hammer,” conducting solitary protests against American wars, cleaning trash off the banks of the Hudson into his 90’s, and sailing down his Golden River in the Clearwater.

Six-foot beanpole Seeger on the deck of the Clearwater, the sloop he built to raise awareness of pollution in the Hudson river. Click for source.

Pete Seeger passed away on January 27 at the age of 94, but his spirit lives on. He was one of the most inspirational people of the twentieth century–if not the twenty-first. 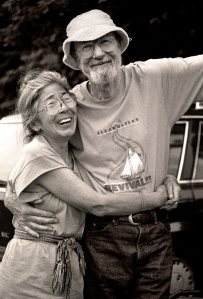 With his wife Toshi, who died a few days short of their 70th anniversary. Click for source: nytimes.com.

My favorite Seeger song is Turn, Turn, Turn. Here’s a recording from 1962:

4 thoughts on “The Lion Sleeps Tonight”