Chapter 7 in my novel of a Vestal Virgin in Ancient Rome and her friendship with Julius Caesar. 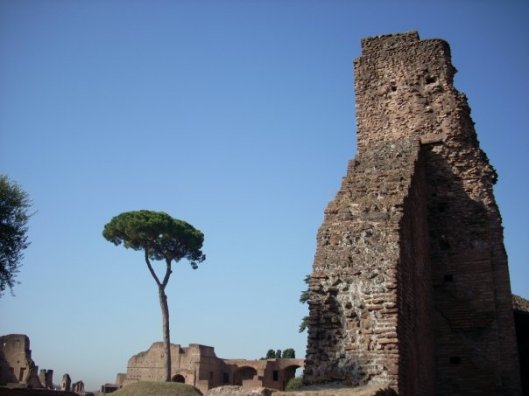 Remains on the Palatine Hill at Rome. Photo by the author.

When Lucia was seventeen, Ennia fell ill with a quartan fever. Socles the physician was called to attend her. He himself was not permitted to examine her, for her body was inviolate, but he explained to the other Vestals how to gather the information he needed. “The paroxysm occurs every fourth day? Are you certain?” he asked Fabia and Lucia. “That indicates an atrabilious fever, yet black bile is a sediment of blood, and a virgin loses more blood than a normal woman of childbearing age. A bilious fever, with paroxysm every other day, would be expected in a Vestal.”

“Nevertheless, the fever has recurred thrice now, on every fourth day,” replied Fabia patiently. “The pattern is clear. And with each cycle, she becomes weaker.”

Like most Greek men, Socles wore a long beard, and he stroked it now, pondering the disturbing discrepancy between theory and practice. “And her menses are regular?” he prompted Philinna, Ennia’s body-slave.

“No, they usually come late,” replied Philinna. “She even misses a month sometimes.”

Socles’ expression cleared. His theory had been confirmed. “She must be given a liquid diet of clear, light broth,” he instructed, “made without garlic, onions or bitter greens. Massage of the back and midriff during the periods of rigor, with a lukewarm bath after.”

Although his prescription was carefully followed, Ennia steadily grew weaker. “Don’t leave me,” Lucia begged her. She took both of Ennia’s hands in hers. “What will I do without you? Where will I find a friend in this House?”

Ennia smiled. “A sure friend is found in unsure times,” she whispered, quoting her ancestor-poet. “And now the Goddess who gave my body takes it back. Farewell, Lucia. Remember one who loved you.” She closed her eyes, exhausted by the effort of speech, and died early the next morning.

When informed of the failure of his treatment, Socles shrugged. “Atrabilious fevers are rarely cured,” he remarked, and collected his fee. Ennia was given a grand funeral, as befitted a Vestal of Roma, with a eulogy delivered by her paternal uncle. Her will provided for a portrait statue to be sculpted and set up in the Forum beside the Vestal House. Most of her property went to her nieces and nephews, but she left her library to Lucia, together with a large, tear-shaped pearl strung with red coral beads, a simple but valuable jewel which she had owned since childhood. Vestals wore ornaments only among other women, and sparingly, lest they be accused of luxurious living which might compromise their chastity. But many a Vestal nevertheless owned jewels of quality, to be enjoyed in private. Licinia’s collection was quite impressive.

The next day, Claudia Tertia arrived at the Vestal House. She was shockingly mature for a new Vestal, sixteen years old. To select a girl of that age was unusual, but her father Appius Claudius, known as Pulcher or the Handsome, assured the Pontifex Maximus that she had not yet begun her monthlies. Lucia learned this from Licinia, who liked to serve gossip with her beloved pastries. “And here’s the really juicy part,” she confided to Lucia. “They say that Appius Claudius offered Caesar ten silver talents to choose her, but Caesar demanded twenty, and they haggled until they settled on sixteen, one for each year of her life.”

Upon Metellus’ death, Caesar had been elected as the new Pontifex Maximus, and had just moved into the People’s House, the residence of the chief priest, right next door to the Vestal House.

“So Caesar accepted a bribe to give Pulcher’s daughter the title of Vestal?”

“It would appear so,” agreed Licinia, popping a fig cake into her mouth. “An odd way to begin his career as Pontifex Maximus, but he wouldn’t be the first. There aren’t many sticklers like Cato around these days. And if you’re going to take a bribe,” she reasoned, “it’s better to take a big one.” Licinia wiped her hands, sticky from the honeyed cakes, on the moist cloth offered by her slave. “He’s probably trying to recover the cost of all the bribes he had to pay to be elected chief Pontifex.”

“Will Vesta be offended?” Lucia asked curiously. Licinia was not as authoritative as Fabia, but she was the second eldest Vestal, and she knew much.

“Not if Claudia is a virgin,” decided Licinia. “The Goddess doesn’t care about men’s machinations and maneuverings, so long as they abide by her requirements. And the rule that a prospective Vestal must be younger than ten was made by the Pontifical College, not the Goddess.”

Claudia was difficult from the start. She had been all but promised to Quintus, a handsome member of the Volusian clan, but Appius Claudius Pulcher repudiated the match as soon as he scented the potential to cut a deal with Caesar. Having a Vestal in the family was a major social coup, and he had older daughters who could be deployed in marital alliances. Claudia Tertia was the youngest, and the only one with any hope of passing as pre-adolescent. Furious at the fate her father had foisted upon her, Claudia searched for an object on which to vent her wrath, and found it in Lucia, the quietest and smallest of the other Vestals.

Lucia was put in charge of teaching Claudia her novice duties, a decision which Fabia quickly regretted. “I thought that as the two youngest, you would be natural friends, just as you and Ennia were friends,” she told Lucia apologetically. But Claudia, unawed by the sacredness of the charge laid upon her and unaccustomed to physical labor, flatly refused to grind salt and grain for the mola salsa, or rise in the middle of the night to tend the Goddess’ flame, or dirty herself grubbing about with ashes. She attacked her body-slave, slapping the woman repeatedly when she tried to dress Claudia’s hair in the six braids. When Lucia made the mistake of intervening on the slave’s behalf, Claudia was furious, and nearly struck Lucia too. Then she marched down the corridor and barged into Fabia’s sitting room.

“How dare she tell me how to treat my slave!” she raged. “How dare she interfere? She comes from a family of nobodies, and I am of the Claudii!”

“Your name may be Claudia, but you are no longer of the Claudii,” replied Fabia in her calm, well-modulated voice. “When you became a Vestal, your family connection was legally severed. Nor does Mormo belong to you.” She held up a hand as Claudia began to protest. “Yes, in the outside world, men and women do with their slaves as they please, but in this House, slaves belong to the Goddess. They are virgins just as we are, and according to the law, they are Her property, not yours.”

Claudia’s fury seemed to subside into disgust as she listened to her punishment: a week of evenings confined to her chamber. “Thirty years of this prison,” she said dully. “I am the one who has been enslaved.”

After that, finding ways to torment Lucia was Claudia’s main source of entertainment when she was in residence at the Vestal House. She entered Lucia’s chamber without knocking. She crept in and removed or re-arranged objects—garments and books—without asking permission. When caught red-handed by Lucia’s body-slave Andromeda, she was predictably shameless. She left her own tasks for Lucia to complete, pleading headaches, and convinced the physician Socles that she was “delicate” and needed more rest than the other women. Her monthlies began, but it seemed that Fabia had not introduced her to the Pledges of Roma. Perhaps the Chief Vestal did not deem her trustworthy.

As Claudia experienced more of the privileges Vestals enjoyed, she grew resigned to the life, though no less bitter. Like Sergia and Popilia, she prized her front-row seats at games and entertainments, and accepted every invitation to fashionable dinner parties. She loved to be accompanied by lictors, the beefy bodyguards who escorted Vestals to and from ceremonial occasions; a lictor was a privilege otherwise reserved for Roman magistrates of high rank. Most of all, Claudia relished the idea that if her carriage crossed paths with a condemned man going to his execution, he would be pardoned, and she used to drive past the Hill Gate on the off chance of meeting a prisoner. Lucia was inclined to count this as a virtue, but Licinia disagreed.

“It is not for us to decide who receives the Goddess’ favor,” she said. “The only one Claudia has saved so far is a vicious fellow who murdered his own wife,” she said. “She bragged for days about her great virtue of mercy and clemency, but at the games, she’s even more bloodthirsty than Sergia. She loves nothing more than a well-executed kill.”

Historical note: Caesar is not known to have accepted a bribe in order to appoint a Vestal, but he may well have. He paid massive amounts in bribes himself, and such corruption was endemic to the politics of the Late Republic.