Chapter 6 in my novel of a Vestal Virgin and her friendship with Julius Caesar. 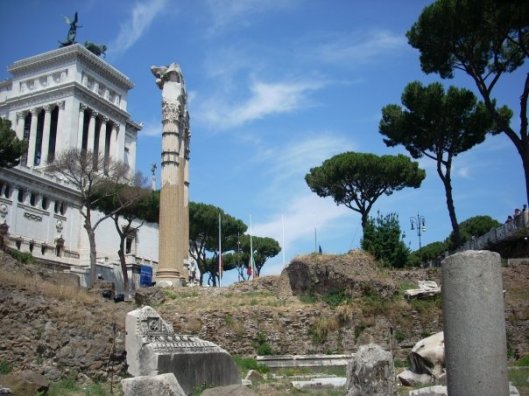 The Forum of Julius Caesar, with one column standing from the temple of Venus. Photo by author.

Instead of Sergia and Popilia, Lucia was sent to Caesar’s banquet, and reclined in a place of honor among the diners, on the middle couch and directly to Caesar’s right. Fabia had been invited, but was indisposed, so Lucia was the only Vestal present. She felt uncomfortable, reclining on the same couch as a man, but nobody in the assembled group seemed concerned by the potential impropriety, perhaps because of his position as the chief priest.

Caesar was a tall man in his thirties, with abundant dark hair just beginning to recede at the temples, and large brown eyes flecked with green. He wore the purple-bordered toga of the Pontifex Maximus, with the knife attached to his belt, as Metellus Pius had, but the handle of Caesar’s knife was inlaid with jewels, and the Pontifex’s ceremonial spiked skullcap was nowhere to be seen; instead, he wore a crown of oak leaves, the coveted honor given to Roman men who had saved the life of a fellow citizen in battle. He smelled faintly of cedar and myrrh.

Caesar was punctilious in his duties as host, often signaling for the refill of an empty dish or cup even before his well-trained slaves noticed the need. Though he had a rich and commanding voice, as befitted a public man, he did not talk as much as Lucia expected, but had a habit of tossing his guests some interesting topic like a shiny bauble, then observing them in turn as they debated it. Meanwhile he rotated the short stem of his silver wine cup in his hand, with the hint of a smile on his lips.

“In the course of my pontifical duties, I had occasion to consult Herodorus of Heracleia on the phases of the moon,” he said now to Marcus Antonius, a good-looking fellow only a few years older than Lucia. “He tells us that the moon is populated by women fifteen times our size. What think you of that, young Marcus?”

“Why, I think we must make the moon our next province,” Marcus replied, grinning. “And I will contract a marriage with their queen!” He cupped his hands in front of his chest and waggled his eyebrows suggestively, as the room erupted in laughter.

“Be careful on your wedding night,” said one of the other men. “Don’t fall in!” While the others chattered about the race of moon-women, Caesar turned to Lucia.

“If you could travel to the moon, Lucia, would you go?” His voice was quiet, his face was close to hers, and his dark eyes held her gaze. The other guests faded away. With his sharp cheekbones and prominent nose, he was not the most beautiful man in the room, but he was by far the most magnetic. She understood why so many women had fallen under his spell. Yet there was another, more important way in which he differed from other men.

“You don’t think it’s a joke, do you?” she said. “You really want to go there. You think that the limits set by the gods can be overcome.”

His expression changed, very slightly. Caesar was surprised. He said nothing, but gave her his half-smile, and turned back to the party.

After that, Lucia seldom saw Caesar in private, because she did not frequent evening entertainments. She spent her evenings listening to Ennia read poetry, or helping Fabia consult her holy books by the light of the many-branched lampstand in the Chief Vestal’s chamber. These books were written on a variety of materials, from lead to waxed wood to linen and papyrus, with a few even inscribed on old sheepskins. They contained prayers in strange-sounding archaic Latin, manuals of divination, and long lists of prodigies and signs which pertained to the Vestals or the festivals they oversaw.

One night, she found a list of every lunar eclipse which had been observed since the founding of the city, with other observations on the phases of the moon and their relationship to the festival calendar. “I shall copy this for the Pontifex Maximus,” she told Fabia.

“Don’t ruin your eyes! You may have Cleander do it,” said Fabia, speaking of their clerk.

“I don’t mind,” said Lucia. She wrote a fine hand, and was proud of it. Her father had not deemed scribal skills necessary for the education of a wellborn girl, who required only basic literacy in order to run a household and check the accounts. Such a young woman would possess plenty of clever slaves to read to her, or write letters; she need not dirty her fingers with ink. As a Vestal, Lucia had only one slave, who was kept busy caring for her person and helping with the work of the Goddess. She had learned from Ennia how to sharpen a reed stylus, mix ink to the right consistency, smooth any rough spots on the papyrus with a pumice stone, and write parallel to the grain of the plant fibers.

“You are quite the antiquarian, Lucia,” smiled Fabia. “You would make a fine Chief Vestal one day, but that is in the hands of the Goddess. After all, you joined us very young. You will be released from your duties at thirty-six if you wish it. You will still be young enough to marry.” Lucia heard the unspoken thought: You may be young enough to have a baby.

“And what of you, Fabia?” Lucia asked boldly. Fabia had just completed her own obligatory service and was now forty years of age. “Will you marry?”

“No, child. I will remain a Vestal until I die.” Fabia seemed very certain of her choice, yet unhappy with it. Lucia did not dare to ask more. Even a woman of forty could attract a husband, if she had Fabia’s breeding and connections. Although Vestals lived modestly in material terms, they received a substantial annual stipend from the treasury, so Fabia could offer her husband financial resources as well. Now that she thought of it, certain elderly men of Senatorial rank had paid discreet calls over the past year, always with a plausible pretext for speaking with Fabia. None of them, however, had visited the Vestal House a second time.

Lucia herself could not imagine marriage. She found some men attractive, and had not been immune to Caesar’s charms. But all her freedoms as a Vestal would be forfeit if she retired and placed herself “in the hand” of a man. As for forming a liaison with a man during her time in the service of the Goddess, it was not to be considered. Such an act was incestum, a type of unchastity which threatened Roma itself.

Nevertheless, she suspected that such lapses happened from time to time. When Lucia was nine, Sergia’s handsome and arrogant relative, Lucius Sergius Catilina, had been accused by his political enemies of seducing none other than Fabia herself. That same year, rumor had it that Crassus, one of the wealthiest men in Roma, was overly intimate with his cousin, the Vestal Licinia. Catilina had been tried and acquitted; plans to prosecute Crassus never materialized. Of Fabia’s innocence, Lucia had no doubt, for she knew that Fabia’s love of the Goddess burned brightly. She was less certain about Licinia, who had a soft spot for Crassus even now, and counted him a close friend; the two spent long hours talking of their real estate holdings in the city, and which houses were the best investments. Crassus was so rich that he might easily have bought off his accusers, or threatened them into silence. Yet had one of the Vestals been convicted, she would have been buried alive, and her lover scourged to death by the Pontifex Maximus. It had been fifty years since the last such executions, but Lucia did not doubt that the Senate and Roman People would apply the traditional penalty again, if a Vestal were convicted of unchastity.

Lucia completed her copy of the book about the moon in only a few weeks, and had a messenger take it to Caesar’s office in the Royale. In thanks, he sent her a copy of one of his own works titled On the Stars, a volume about the discrepancy between the Roman months derived from the old lunar calendar, and length of the solar year. Festivals were drifting further and further away from their proper places in the calendar. Celebrations of harvest fell early, and the Vestals gathered the sacred emmer for mola salsa while it was still green. Roma, he said, must retain only those parts of the Way of the Elders which were useful to the state. The Senate and People must keep pace with current knowledge if the city was to fulfill its rightful destiny and expand its rule.

Historical note: The aristocratic Catiline was in fact tried and acquitted in 73 BCE on the charge of incestum (unchastity) with the Vestal Fabia. Crassus was also accused of improper behavior with Licinia.

Herodorus really did write about a race of giant moon-women, though exactly what he said is lost.

Caesar wrote a book called On the Stars (now sadly lost) and was deeply interested in calendar reform.