There were people living on the site of Dublin from prehistoric times, but it was the Vikings who first built a sizable settlement there. Despite these Scandinavian origins, Dublin’s name comes from Irish dubh linn, “dark pool.” This was a pool formed at the point where the small river Poddle joined the Liffey. (The Poddle sounds like a name made up by J. K. Rowling, doesn’t it?)

The Poddle and the “dark pool” are visible at bottom right of the map.

A reconstruction of the Viking settlement, with the “pool”–perfect for mooring a Viking fleet. Both maps: Irish Times.

What I enjoy most about Europe is the feeling of so many layers of culture and civilization beneath my feet.

The invitation was printed with an inkjet on computer paper cut slightly uneven. The envelope was hand-addressed. The students of P.S. 43 (Willa Cather School), Bronx, invite you to BeanFest, a Celebration of Legumes Grown in the School Garden. Wednesday November 15 from noon until four o’clock in the offices of the New York Messenger. Come taste recipes from Messenger Food Critic James Whelan! Sponsored by Sunnier Futures, Grow2Learn NYC and Gardens of Lugh Organic Farm.

“Vacation time?” said Laura when Tabitha asked. “No, just come in an hour earlier a few days next week. That’s what I’m doing. I wouldn’t miss this for the world. James is planning all vegetarian recipes for the kids!” Laura, she gathered, was a long-time vegetarian, married to an enthusiastic carnivore.

Tabitha readied herself for the “BeanFest” in the awareness that Rúairí might be there. Why should I dress any differently for him? she asked the part of herself that quivered at the thought of seeing Rúairí. You know exactly why, answered that part. A little something we might call womanly honor. She finally decided on a long skirt, high heels and a clingy sweater, in earth tones because it was Fall.

The Messenger offices were in the theater district, a few blocks from Times Square. With the help of an intern, Tabitha found her way to a suite containing a full kitchen, where James Whelan was teaching a bevy of third-graders to roast trays of chickpeas marinated in tamari and lemon juice, whip up tasty batches of Great Northern Bean hummus in the food processor, and simmer pots of mild Three-Bean chili with Candy Bell hybrid organic peppers, diced and flash-frozen six weeks before in anticipation of this day. A Messenger photographer was recording the fun for posterity and an upcoming feature in the Food section.

She found Laura in a corner, sampling a Dixie-cup sized portion of the hummus. “Thank goodness you’re here,” she said, handing Tabitha another cup full of carrot sticks. “The kids are on the boisterous side, don’t you think? James loves it, but I’m in dire need of adult conversation.”

“Certainly,” answered Laura. “They’ve been shunting the kids in and out in one-hour shifts. First they get a tour of the Messenger offices, and then they cook for thirty minutes. Rúairí and Snorri are here, but they went on the last tour.” She winced at a particularly high-pitched shriek from one of the girls. Laura was unaccustomed to children.

“I see. Is there something I can do to help out?” Tabitha asked, glancing over at James. He appeared to be wiping up a batch of spilled hummus as the third-graders ran amok, flinging olives at each other with spoon catapults.

“Oh, go and help him if you must,” said Laura. “He looks irresistible, doesn’t he? A man who knows his way around a kitchen always does. But come back and talk to me after.” She paused and gave Tabitha an arch look. “That is, unless Rúairí shows up. In which case you have my blessing to abandon ship.”

Tabitha made her way to the kitchen counter, where two Cuisinart machines were processing hummus at full-bore. Squeezed lemons and garlic clove peels littered the counter and floor. Wearing what appeared to be a spotless three-button wool suit and his usual look of wry amusement, James greeted her. “I’m afraid my mise en place has become a bit disordered,” he apologized. “But we’re in the tasting stage now, the last crew. Hullo mate!” he said, collaring a robust youth who was bent on shoving a carrot stick up each nostril for the amusement of his friends. “Try some of the chili.”

“Well done, James.” Tabitha found the vegetable scraps bin and began scooping the spent lemons into it. She looked down to see a winsome brown-eyed girl smiling at her. “Hel-lo,” said the girl. “What’s your name?”

“I got an invitation in the mail,” said Tabitha, wiping the counter clean with a yellow sponge. There was no reply, and she looked down. The little girl was now absorbed in a game of grunting and squeaking animals on her iPhone. “That’s a cute phone,” she said to the girl.

“My Daddy gave it to me for my birthday. Lookit this!” said Delta proudly. She held up the phone so that Tabitha could see the case. The back was ornamented with a hand-painted image of Hello Kitty in bridal gear, toting a bouquet of pastel pink and green roses.

“Ahhh,” said Tabitha, her eyes glued to the phone. “When was that? When was your birthday?”

“October 1,” said Delta proudly. “I had a Hello Kitty cake!”

“Wow,” said Tabitha. “I wish I’d had that, when I was your age. James, could I have a word with you?” She pulled him by the forearm over to where Laura was standing.

“What is it, Tabitha?” said Laura. “You look like you’ve seen a ghost.”

“That little girl, Delta,” whispered Tabitha. She glanced over her shoulder to where the girl, having returned the phone to her pocket, was reaching for a Dixie cup of chili. “I think she’s got Cissy’s phone!”

Upon hearing Tabitha’s news about the purloined iPhone, James looked grave and advised Tabitha to leave everything in his hands. Laura began to chuckle. “What does that mean? You’re going to call Galen?” she teased him.

James gave his wife a smoldering look that said, Be sure I’ll deal with you later. This caused Laura to smile in satisfaction, and Tabitha thought, So that’s the way of it between you two.

“I’ve a few mates here in the crime section,” James explained to Tabitha. “That was my old beat, before I took up food writing.”

A throng of adults and children began to crowd into the kitchen. “Look who’s here!” crowed Rúairí when he saw her. “Laura told me you’d come.”

“She did? Why do I have the feeling that there’s some sort of conspiracy surrounding us?”

“Because there is,” he said, not taking his eyes off her. “Tabitha, this is Lester Lemke, the editor-in-chief of the Messenger.”

“We’ve met,” she answered shortly, nodding at Lester and at Snorri, who towered over the other two men.

“Indeed we have,” said Lester, edging closer into Tabitha’s space. “Tell me, what did you think of James’ aphrodisiac dinner?”

“Yes, but… did it have aftereffects?” His gaze dropped to her cleavage.

“I’m surprised you remember it. You drank so much that you passed out.” She kept a bright smile on her face. “As a matter of fact, the aftereffects for you were probably quite unpleasant.”

“No more so than for some others I could name.” He stared at her intently, and she noticed Rúairí frowning. Snorri too looked unhappy, though that was his natural expression.

“What are you talking about?”

There was a noticeable pause before Lester said, “No doubt Galen’s head was as sore as mine the next day.”

“The chronics, eh?” Rúairí tossed him an ostensibly sympathetic glance, while intruding a shoulder between him and Tabitha. “Nice to meet you, mate,” he said, a distinct note of dismissal in his voice. Lester glared at him for a moment, as if deciding whether to take up the challenge, then shrugged and moved off in the direction of James and Laura.

“Langer,” muttered Rúairí under his breath. Meanwhile two teachers who had joined the tour began to round up the children for their bus trip home to the Bronx.

“Thanks for getting rid of him,” said Tabitha. “I take it you two were the inspiration for the BeanFest?”

“It was Cissy’s idea,” said Snorri. “Good publicity for us and the Messenger, benefits for the kids and the school. Cissy’s real talent is matchmaking.”

“Yes…” answered Tabitha, avoiding Rúairí’s look. Then she teased Snorri, “You’re a bachelor, Mister Sturluson. Has she tried to set you up with anyone yet?”

Snorri smiled, and his grey-blue eyes lit up. “Maybe. Her personal assistant Keelin dropped by the farm to talk about projects for Spring, and she’s a knockout.” He turned to a surprised Rúairí with an air of triumph. “Yes, it was while you two were in London. I told Cissy we ought to reschedule, but she insisted on sending Keelin all the way out to Upper Nyack. What a shame you missed her. As it turns out, she’s from Dublin.”

“What?” said Rúairí, outraged. “Cissy sent you the Irish girl?”

“My friend,” corrected Snorri solemnly, “Keelin is no girl. She’s a woman. And you’re forgetting that Dublin was founded by Vikings and ruled by them for centuries.” His tone became pitying. “It’s practically a Scandinavian town.”

“I bet you can’t even spell her name,” challenged Rúairí.

Snorri blinked, and then said, “Name the stakes.”

“A shoulder of Redbreast. No, two.”

“There’s a liquor store around the corner,” Snorri pointed out.

“If you think I’m buying it in Midtown, you’re dead mental.”

“Really, Rúairí,” said Tabitha, “You already have one Irish girlfriend. Are you trying to amass a collection?”

Rúarí’s expression changed to one of chagrin. “Actually, Fionnuala dumped me.”

“Oh, I’m sorry.” She felt a keen pleasure at the news, and hoped it was well hidden. Don’t even think about it, she warned herself. He’ll be on the rebound now.

“It seems she met your man Mark in the Starbucks, that time we both went to visit Cissy. He complimented her on her long hair. She and her mother signed up for his Pilates class.”

“What did I tell you,” sighed Snorri. “It’s the magic of Cissy.”

Notes: I had great fun with the Irish names in this story. The only European language more puzzling to the Anglo eye is Welsh. I’m sure there are good historical reasons why Irish spelling is so un-phonetic –just as there are reasons why the same string of four letters in enough, through, though, and bough are pronounced so differently…

The name of “Keelin” Flaherty was inspired by actress Caoilfhionn Dunne, best known for Love/Hate, who appeared in the 2013 Conor McPherson play The Night Alive. 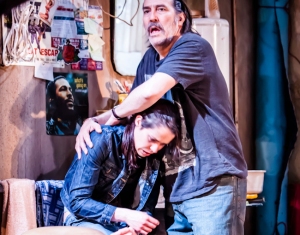 Caoilfhionn Dunne and Ciarán Hinds in “The Night Alive” at the Donmar, 2013. Photo: Helen Warner.