Many people visiting Manhattan gravitate either Uptown for the luxurious boutiques, grand hotels and museums bordering Central Park, or Downtown for the hip art galleries, bars and funky little shops in the Village. Me, I’m a Midtown gal. I’m not rich, and I’m not cool, so it suits me just fine. 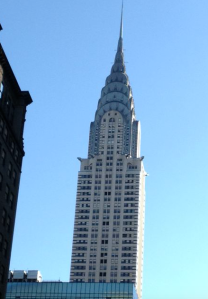 I want to be where I can turn a corner and suddenly see the Chrysler Building, the most beautiful of all skyscrapers.

We like to stay at the Library Hotel, which is a splurge, but not a Four Seasons/Carlyle/Plaza kind of splurge. It’s next to the New York Public Library. Each room is named for subjects in the Dewey Decimal System (and stocked with books to match). 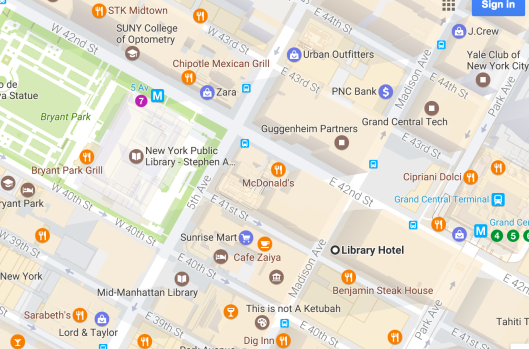 This is my stomping grounds: Bryant Park, the Library, the Morgan, Grand Central Station. It’s just bordering the theatre district, but blessedly insulated from the crowds and hype of Times Square. 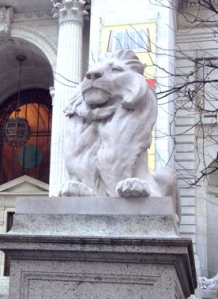 The lounge of the Library Hotel. They have a good breakfast, and wine and cheese in the late afternoons. Very civilized.

Lest this sound too much like a testimonial for the Library Hotel, I’m mulling over the idea of staying a few steps away at the Bryant Park Hotel, which is located in another of my favorite structures: the American Radiator Building.

The Gothic/Modern Radiator Building with its gold ornaments has overlooked Bryant Park since 1924.

After dropping off our bags, we often stop in at Pera, a Mediterranean restaurant, for a glass of wine and some mezze. 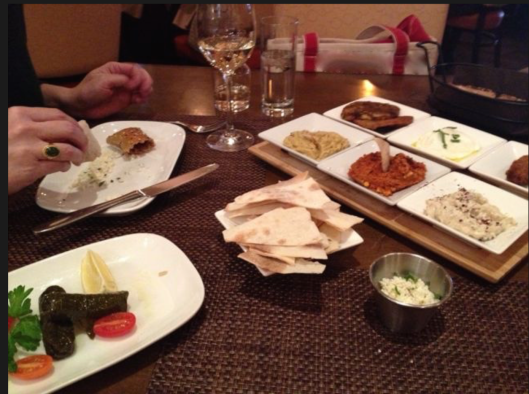 Dips and things to nibble on at Pera in Midtown.

When Tabitha woke, her eyes felt crusty and inflamed, and her cheeks burned with irritation. She rose and went to the bathroom sink. In the mirror she saw that her face was scratched. Only one of the scratches had drawn blood, but her skin was raw and abraded. Examining her fingernails, she noticed flakes of skin and a few traces of blood beneath them.

She ate some cereal and drank her coffee, thinking about Connla. Such a beautiful boy. When I dreamed Aoife, she never possessed a mirror, so I never saw her face. But he had the look of her, I’m sure of it. And of Sétanta, too, in his chin and nose. She shuddered, remembering Connla’s face, exsanguinated and nearly as white as snow, surrounded by a halo of vividly red, wavy hair. And the front of his tunic, stiff and heavy with congealed blood. The smell of it… She ran to the toilet and retched up her breakfast. This is terrible, she thought. It’s going too far. Think about something else. Think of his homecoming… think of him sleeping beside Emer, safe in bed… Safe. She almost called Dr. Liffey, but after washing her face in cool water, she felt calmer. The scratches would fade in a day or two, and her stomach was beginning to settle.

Instead of Dr. Liffey, she called her mother. “Hi, Melinda? It’s me. I wondered if you’d like to have lunch. It’s been a long time.” In fact, they hadn’t had a real conversation in years.

“Okay…” Melinda’s voice was wary. “What’s this about, Tab? You’re not going to ambush me again, are you?” Melinda had not forgotten Tabitha’s anger over the talk shows. It had shocked her, and she thought Tabitha unfair and harsh to judge her for speaking of her ordeal.

“No, no ambush. No accusations. I promise. I just thought it was time we talked again.”

“You’re up to something,” said Melinda suspiciously. “I can tell. You were never good at hiding your feelings.”

“Well, will you meet me? My treat.” They arranged to meet at Pera, a Mediterranean place in Midtown, close to the New York Public Library, where Tabitha had some business in the rare books division on the second floor.

Melinda met her on the sidewalk outside Pera. “Tab! What on earth happened to your face?”

“Um… I was nuzzling a friend’s puppy and he scratched me.” Her mother raised an eyebrow, but didn’t ask any more questions.

“This is a nice place,” Melinda said approvingly when their mezze and two glasses of chardonnay arrived. She picked up a stuffed grape leaf. “Are you sure you can afford this? Maybe I should get it.” Her voice dropped to a conspiratorial whisper. “I’ve got Henry’s Visa card!” Melinda expected her attorney husband to support her, and complained regularly of what she called his “frugal” ways. Periodically, she demanded and received a shopping spree. Tabitha privately thought that Henry was cheap, not frugal. He was the kind of man who boasted of his expensive scotch, then poured one finger for his guest, and two for himself.

“As a matter of fact, I’ve got a real job now. I can manage my rent, no problem, and enjoy a luxury now and then. I’m even starting a retirement account.”

“Tab, what a surprise! You finally got your act together. I figured you’d give up, sooner or later, and settle down with a nice man.” She paused. “Maybe we can go to Bloomingdale’s after lunch?”

“Wish I could,” said Tabitha, hoping she didn’t sound as annoyed as she felt. From the start, Melinda had reacted negatively to her ambition to become a medievalist. Her only ally had been Gran. “I’ve got to get back to work after this.” As she sipped the chilled wine, she watched her mother, wondering how to broach the subject of Corbin Crowe. Melinda was barely sixteen years older than she, in her mid-fifties now, and still good-looking, with shoulder length blonde hair, expensively highlighted and cut. People never took them for mother and daughter, nor even for sisters. Where Melinda was petite, fair and blue-eyed, Tabitha was taller, and dark-haired, with hazel eyes and stronger features. I look like Crowe, she thought disgustedly. Is that why she and I have never gotten along? Because I make her think of him?

“Where’s the new job?” asked Melinda politely. “Are you teaching here in town?”

“No, I’m working in Brooklyn. With rare books. You might say I’m a librarian now.”

Melinda shook her head. “A librarian. Rare books. How funny is that?” She drained the rest of her wine and stared at Tabitha, a bitter smile forming on her lips.

“You’re exactly like your father. Don’t you remember? That was his job. He worked at the State Library in Harrisburg. Something about rare books.”

Her mother’s words stung her. She didn’t think of Corbin Crowe as her father. In her mind, he was more like… like a sperm donor. “I hardly remember anything. It’s all just a blur to me.” Yet, one of the few things she recalled clearly was that the house had been filled with books. She remembered walls lined with old books, and shelving, and stacks of books around a big rolltop desk.

“I did my best to steer you away from all that,” said her mother. “But you would never listen to me. You did exactly as you pleased.” Steer me away? thought Tabitha. So that’s why you were always trying to get me to play softball, or take music lessons, or ballet dancing. That’s why you hated it, that all I wanted to do was study.

“Why didn’t you just tell me the truth?”

Melinda looked away to her right, and then back at Tabitha. “At first, I didn’t want to talk about it, ever. And then, I thought you remembered, and were doing it just to be contrary. Finally I realized that you’re his daughter. I couldn’t change that. You’re a lot like him, Tabitha.”

“How can you say that? That’s a horrible thing to say to me!” She felt tears coming and suppressed them. Melinda hated what she called “a scene,” unless it was one she caused herself. Why do I let her get to me like this?

Suddenly her mother leaned forward and spoke assertively. “Tab, it’s time you faced up to the truth. I talked about my life to Oprah and Phil” —here Melinda’s face assumed the reverent look she always adopted when speaking of her “friends” the talk-show celebrities— “and that’s how I came to accept it and stop blaming myself. You can do it too.” She paused and added judiciously, “Though of course your case is a little different from mine. But they could help. Would you like me to call my agent?”

“No thanks,” said Tabitha, remembering her resolve not to fight with her mother. “I mean, thanks Melinda, but I’m seeing a therapist.” In private. “I’m working on it.”

“Oh,” said her mother, slightly deflated. “That’s good. Well, I’ll send you Phil’s book on finding your authentic self. While you’re at it, maybe you can find some of me in there.”

Notes: I actually once knew a man who bragged about his expensive Scotch, then poured stingy portions for his guests while filling his own glass to the brim. Little do such people know that their behaviors are being filed away for future use in “fiction,” which is a tapestry of threads from real life.

I can’t resist showing you another picture of the Library Hotel. Once, in the off-season, we were unexpectedly upgraded to “The Love Room” which is one of their best. It was spacious, with a king size bed, a tiny balcony, and a collection of books on the subject of romance and sex, including my favorite Intercourses, an aphrodisiac cookbook. 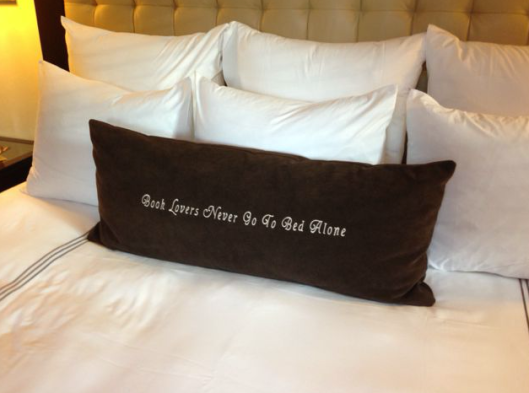 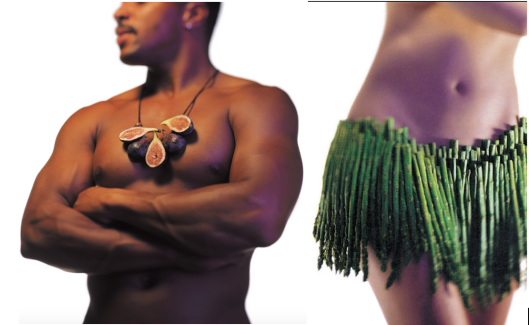 A necklace of figs and a skirt of asparagus, from Intercourses.