There’s nothing like a good handwritten love letter to persuade me that we are losing something important with our endless tapping on phones. I’ve been reading lots of love letters, and couldn’t resist gathering what struck me as the best or most interesting bits. Granted that women have penned many of the finest love letters, I limit myself here to masculine effusions.

Sterne, looking like he has something naughty on his mind. By Sir Joshua Reynolds (National Portrait Gallery)

Sterne, the celebrated author of Tristram Shandy, was unhappily married, but he seems to have found adequate consolation, especially after becoming famous. Neither of the two addressees here was his wife. Contrast his letters with the next one: 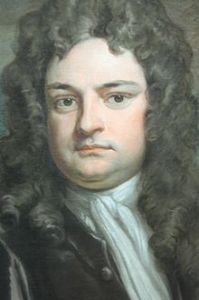 Godfrey Kneller’s portrait of Steele, one of a series of members of the famous Whiggish Kit-Cat Club. National Portrait Gallery.

Irishman Steele met Mary (“Prue”) Scurlock at the funeral of his first wife, who had died after only a year. He wrote Prue over 400 letters during their eleven-year relationship, which makes me wonder how much time they actually spent together. In certain cases, absence makes the object of desire all the more alluring…

Franz Kafka to Felice Bauer (both letters in 1912)

Kafka’s love letters are fascinating. He only met Felice in person a few times, but carried on a most passionate epistolary romance with her for five years, while he lived in Prague and she in Berlin. The letters are nakedly self-revealing –far more intimate than actual sex– and he often dwells on his physical and mental weaknesses, yet during this time he wrote his masterpiece, The Metamorphosis. I like his description of adding details to his work as a kind of secret code of references to Felice. It’s a very writerly thing to do.

Kafka and Felice Bauer. He was engaged to her twice and twice broke it off.

I never realized that Hemingway had a long term, reportedly unconsummated (yet quite passionate) romance with Dietrich; they first met in 1934. The letter containing this charming quote was put up for auction recently, valued at $20,000-$30,000. In another letter, Hemingway calls her “Dearest Kraut” and imagines her performing onstage “drunk and naked.” Hemingway’s words struck me as a lovely variation on the Irish endearment a chuisle mo chroí (“Pulse of my heart”).

The passage in Hemingway’s handwriting.

“Papa” was a charmer at every age.

To judge from his subsequent epistles, Waugh wasn’t kidding (he was as famous for his nastiness as his wit). One instructed his wife to cease writing him “boring” letters about the things that interested her, and spend more time enthusing over his new book. Thirteen years younger than Waugh, Laura came from an aristocratic Catholic family and ended up bearing Waugh seven children, six of whom survived.

Evelyn Waugh (as happy as it was possible for him to look) and Laura Herbert at their wedding.

Pope was another writer with a reputation for nastiness, but all his charm and elegance are on display in this letter. He was neither the first nor the only man to fall in love with a pair of sisters, but sadly, neither one would have him–perhaps due to his tiny stature and ill-health. Nevertheless he maintained a close friendship with Martha (“Patty”) Blount until the end of his life. One of his letters to her closes with this: “I send you Gay’s poem on the Princess. She is very fat. God help her husband.”

Napoleon is famously supposed to have written Joséphine, “I am coming home. Don’t wash.” Indeed, when the 26-year old general met the 32-year old widow, he plunged into a truly mad and surprisingly long-lasting passion. He divorced his beloved Empress in 1809 (when she was 46) only because she was unable to give him a much-needed heir. An auction of letters by Joséphine fetched more than half a million pounds in 2010.

The romance and secret engagement (1818-21) of Fanny Brawne and the doomed John Keats is legendary. At first he thought her “ignorant,” with “bad” hands, a mouth “both good and bad” and only “tolerable” feet. Soon, however, he fell so deeply in love that Fanny’s beauty seemed unearthly to him; indeed he wrote to her “Why may I not speak of your Beauty, since without that I never could have lov’d you.” The great aesthetes, men like Keats, Ruskin and Wilde, tend to speak this way to their beloveds without considering the full meaning of their words. After all, if Love lasts only as long as beauty, it is fleeting indeed. But Keats was very young when he wrote these letters. Since I have mentioned Ruskin, I will give a snippet from him next:

Ruskin seems to represent a very repressed kind of Victorian sexuality. After marrying Effie, he failed to consummate their marriage. According to Effie, on their wedding night, he discovered that her naked body was not as he had imagined it, and he himself admitted that he found “certain circumstances to her person” disgusting. After five years of wedded virginity, Effie had their union annulled and married the painter John Everett Millais, who found nothing wrong with her body (they had eight children). A 2013 book defends Ruskin on the ground that he discovered that Effie didn’t really love him and “was too scrupulous to have sex without reciprocity.” Umm, right. I don’t buy it. Ruskin is not known to have had a sexual relationship with anyone –at all– and he never married again. 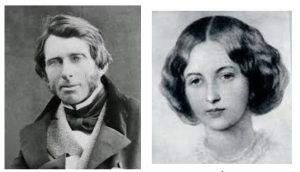 I will follow up Ruskin with Freud, who utterly rejected Victorian ideas about the shamefulness of sexuality. Given that he had so much to say about sex, it is interesting to catch a glimpse of the young Freud’s own inclinations, which seem to have run toward fantasies of being the Big Bad Wolf– with an interesting juxtaposition of food and sex. He was 28 when he wrote this letter to his fiancée, one of 900 such epistles (!) which a biographer described as “a not unworthy contribution to the great love literature of the world.” The couple had six children and were happily married for 56 years. As for the cocaine, the young Freud considered it a wonder drug and recommended it to all his friends, only belatedly realizing how dangerous it was. He himself was a regular user between 1883 and 1896. 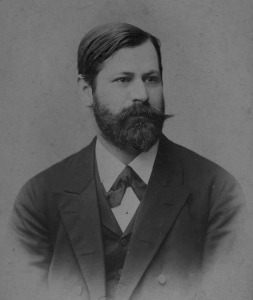 Caro Lamb is said to have described Byron as “mad, bad and dangerous to know,” but she was the one who seemed a bit off-kilter. Byron had that effect, on both sexes, but especially women. Smitten after reading Childe Harold’s Pilgrimage, she wrote him a fan letter and they embarked on a torrid six-month affair which he finally ended, complaining of her “total want of common conduct.” Here, he tries to let her down easy, but after the breakup, when he insulted her at a party, she broke a wine glass and publicly tried to slash her wrists, then sent him a lock of her pubic hair. She went on to write the scandalous novel Glenarvon, in which a wicked character based on Byron played a starring role.

Clever erotomane Caro (with cropped hair) and Object of Desire Byron. Both portraits by Thomas Phillips.

Wilde’s letters to “Bosie,” whom he met when the “dear boy” was 21, are exquisitely beautiful. The first passage is oft-quoted, the second less so. He wrote it while in prison after his conviction for “gross indecency” (i.e. homosexuality). It caught my attention for the references to the Psalms (“covered with mud…from the deepest abysses”), which slip easily to Christianity (“to accept every outrage… to let my body be dishonored”) and Platonic philosophy (the body/soul distinction and the soul’s longing for Beauty). Wilde knew how to write, and for better or worse, Bosie was his Muse. The affair did not prosper after Wilde emerged from prison, and he died penniless in Paris at 46. Bosie went on to write bad poetry, publish an anti-semitic journal, and serve prison time for libeling Winston Churchill.

Young Alfred had the look of an angel but was not very bright.

Chesterton’s work is notable for his gentle yet penetrating wit and his deep compassion. In a letter proposing marriage to Frances Blogg, he reckons up “the estate I have to offer you,” and lists his equipment for “starting on a journey to fairyland.” The first four items are as follows:

1st. A Straw Hat. The oldest part of this admirable relic shows traces of pure Norman work. The vandalism of Cromwell’s soldiers has left us little of the original hat-band.
2nd. A Walking Stick, very knobby and heavy: admirably fitted to break the head of any denizen of Suffolk who denies that you are the noblest of ladies, but of no other manifest use.
3rd. A copy of Walt Whitman’s poems, once nearly given to Salter, but quite forgotten. It has his name in it still with an affectionate inscription from his sincere friend Gilbert Chesterton. I wonder if he will ever have it.
4th. A number of letters from a young lady, containing everything good and generous and loyal and holy and wise that isn’t in Walt Whitman’s poems.

The final tally also includes a Soul, a Body, and “a Heart… mislaid somewhere.” Chesterton remained married to Frances until he died at 62, and his last words were spoken to her. 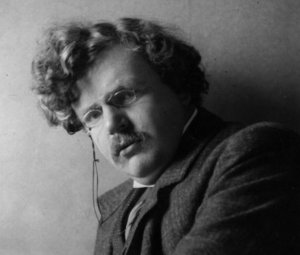 Gilbert Keith Chesterton was a big man, six foot four, and wide of girth. The crown of his head was usually adorned with an unruly shock of wavy hair.

While we are on the subject of big men, I can’t ignore Welles (six foot two and well-fed). In his slimmer days, he was married (1943-7) to the lovely Rita Hayworth, having fallen for her when he saw a pinup of her in Life magazine. He proved to be a terrible husband, cheating on her and never willing to settle down in one place, but they had a daughter, Rebecca. Hayworth later said that he was the love of her life.

I close with another movie star and his self-explanatory letter.

The full versions of most (but not all) of these letters are to be found in the Everyman’s Library anthology, edited by Peter Washington, which I highly recommend.