If asked to pick just one favorite Dylan song, would you be able to? He wrote so many for the ages that there can be no “best” Dylan, only the one that happens to touch you most deeply. For me, that song is his simple ballad “Girl From The North Country.”

The song tells a man’s memories of his lover, a nameless girl with wavy long hair. He addresses a listener who is traveling north, asking him to check on the girl. Is she safe and warm? Is she still as beautiful? And does she ever think of him?

Well, if you’re travelin’ in the north country fair
Where the winds hit heavy on the borderline
Remember me to one who lives there
She once was a true love of mine

Well, if you go when the snowflakes storm
When the rivers freeze and summer ends
Please see if she’s wearing a coat so warm
To keep her from the howlin’ winds

Dylan visited England in the 1960’s and was exposed to British folk music, including the ballad “Scarborough Fair,” which typically includes the line “Remember me to one who lives there/She once was a true love of mine.” In the lyrics, the male narrator sends a message to a girl in the north (Yorkshire and the town of Scarborough), that he will take her back if she sews him a shirt without seams, washes it where there is no water, etc. The girl counters that she will take him back if he buys her an acre of land between the sea and beach sand, ploughs it with a ram’s horn, sows it with a single peppercorn, and so on. The tasks are gendered, masculine or feminine, to match the recipients of each message, and the song uses the fairytale motif of the “impossible task” to suggest that a lost love cannot be regained.

Here is Simon and Garfunkel’s “Scarborough Fair” (first released in 1966 with added antiwar lyrics absent from this live recording). Their version collapses the male-female counterpoint into one message, mingling the feminine and masculine tasks, so that the girl is asked both to sew a shirt without a needle, and to buy the land between sea and beach-sand. The slow tempo and Art Garfunkel’s incomparable, angelic tenor combine to make the song a dreamlike contemplation of lost love:

Bob Dylan reworked the folk song, substantially changing the traditional melody and words, to create “Girl From The North Country” and released it on his second studio album in 1963. His version changes the song’s basic premise, so that both the male-female responsion and the impossible tasks are omitted. Instead, the male narrator sings a folk version of a torch song, dwelling nostalgically on a past love. The narrator’s concerns emphasize his masculine perspective: he feels protective toward the girl, remembering the beauty of her long hair, and his own relentless yearning for her (“Many times I’ve often prayed, in the darkness of my night, in the brightness of my day”).

I first encountered this song in yet another version, the cover by Pete Townshend, which he called “North Country Girl.” This early, 1974 performance is fairly close to the Dylan song and features Townshend’s trademark guitar, which manages to be simultaneously hard-driving and romantically lush:

For his 1982 solo album, Townshend rewrote the lyrics substantially, rearranging the song and adding a refrain. He retains the basic theme of Dylan’s song, but adds details about the girl: she lives in Scotland, in Ayrshire, “way up near the Roman wall,” and her long hair is red.

When you travel to the green hills of Ayr
Where the sea breaks windows on the border line.
Remember me to a girl who lives there
For she once was a true love of mine.

See for me that her coat’s pulled up close,
And her beret frames her sweet pretty face.
See that she’s warm and drink her a toast
For I am exiled in a lonely place.

Please let me know if she remembers me at all,
A hundred times I’ve hoped and prayed
That way up there near the Roman wall
She didn’t suffer when the fall-out sprayed.

The surprise line at the end gives the song a bizarre post-apocalyptic twist and re-frames the nature of the narrator’s prayers: did the girl survive a nuclear war? I never liked that ending, but I loved the way Townshend made the song more personal and specific, so that you can picture the girl with her curly red hair and beret.

Here’s the studio version, very much a pop song, with a very “Townshend” arrangement. This is the one I fell in love with as a teenager.

Bob Dylan recently gave permission for his songs to be used in a new “play with music” by Conor McPherson, titled Girl From the North Country. It’s a departure from previous interpretations of the song, set in the “north country” of Duluth, Minnesota (Dylan’s hometown) during the 1930s. McPherson’s transformation of the setting is a metaphor, reversing Dylan’s journey to the United Kingdom. It also alludes to the period of American song history that most inspired the young Dylan, the Depression years when Woody Guthrie traveled the country, telling farmers who mortgages were foreclosed: “This land is your land.” 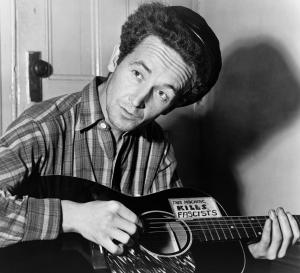 Woody Guthrie, Bob Dylan’s musical and spiritual forefather, in 1943. Note the sign on his guitar: “This machine kills fascists.” 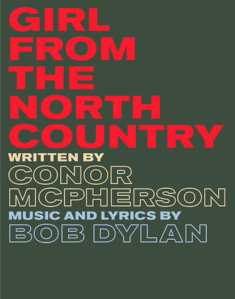 Coming soon to The Old Vic…

Girl From The North Country starts previews at the Old Vic on Monday July 10, 2017. I’ve got my tickets!

27 thoughts on “Girl From The North Country”