The Irish mór rígain or “Great Queen” (Morrigan) was a goddess of warfare and fate. Like many Irish deities, she sometimes manifested herself as a totality of three beings. The tales vary, but these names are often mentioned: Badb (the Raven or Crow of the battlefield), Macha (a goddess of horses and sovereignty whom we have already met in this story), and Anann (the mother of the gods, for whom two mountains in Munster were called “the breasts of Anu”).

The “paps” or breasts of Anu. Photo: The Everliving Ones. 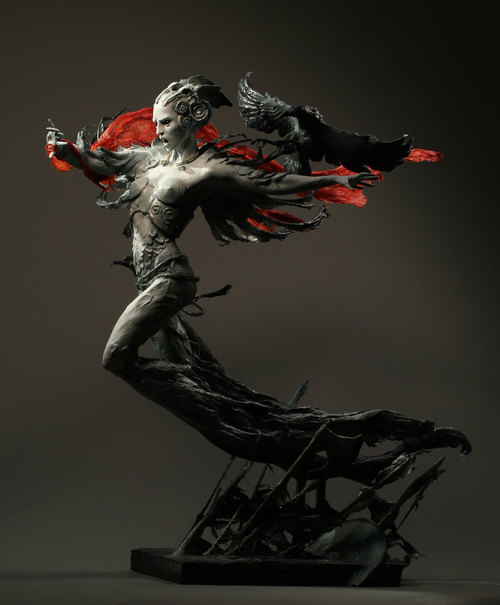 Mixed media sculpture of the Morrigan by Forest Rogers. She seems to be flying over a battlefield, and I like the sweeping movement in this piece.

Thus the Morrigan represents both the nourishing source of life (especially as the land of Erin itself) and the death inescapable for mortals. She intervenes more than once in Cúchulainn’s story.

The appealing young face of the Morrigan in this image is countered by her terrifying hands. 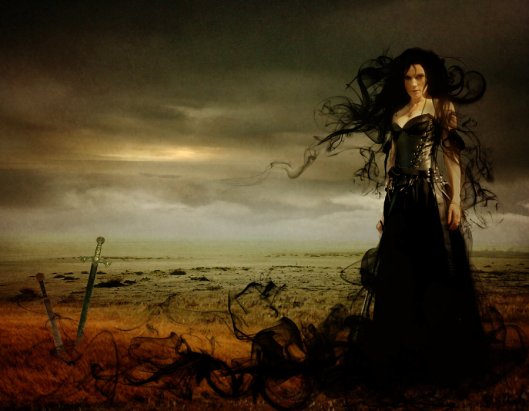 Another battlefield image. This is downright scary. Apologies for the lack of credits on these last two, which I found on Pinterest.

Each time he came to her now, he used the way of a woman, even pouring honey on her groin and lapping it from between her legs. The way of a Dog, she thought to herself, not entirely displeased. He lay with his body fitted to hers all the hours of the night, and in the morning his spear pressed against her buttocks.

“Dog?” she said one morning, after he had emptied himself into her once more.

“When will I be ransomed?”

When the Hound was gone, Cepp entered and stood gazing up at Aoife for a long moment. Then she left the room and returned with a few bits of chopped meat and a handful of barley. These she set on the sill of the window, humming a melody. As Aoife watched, a large crow landed on the sill to retrieve the bits of meat. As it gobbled them down, cocking its head, Cepp smiled and nodded. She was just about to turn away when a second crow, and then a third landed on the sill with raucous cries. Cepp’s expression turned serious.

“What is it?” asked Aoife, but Cepp ignored her. “Great Queen,” she said softly, and Aoife knew that not she, but some otherworldly power, was being addressed. Each in turn, the three crows pecked at the barley, scattering it over the sill. One at a time, they flew away, their cries fading into the distance. Slowly, Cepp approached the sill, carrying a stool. She climbed upon it, and Aoife heard her gasp, then catch her breath, as she read the signs there.

Cepp went to the jug that sat on the large chest, and poured from it into Aoife’s water cup. She drew from some interior pocket of her robe a vial, uncorked it, and let several drops of the fluid fall into the water. Then she brought the cup to Aoife.

“Sétanta has put a babe in your belly. If you wish to be rid of it, drink now. You will bleed, and your belly will be cramp-ridden for a few days.”

“Cepp.” Aoife spoke sharply as she took the cup, weighing it in her hands. “You told the Hound how to sire this babe. Why do you wish to destroy it?”

“I wish… to give you a choice.” Cepp looked pale. Aoife waited, staring at her.

“What did you see in the barley?”

Cepp hesitated before speaking. “If you bear Sétanta’s son, the boy will die young.” Her words hit Aoife like a battle-blow, and she swayed, wondering at her own reaction. What did she care for the Hound’s son? She ought to rejoice as she drained the cup.

“Years. Yet he will die before he reaches manhood.” So the Hound was wrong to believe that their child would be a great warrior. “Will he be healthy and strong?”

After the little woman was gone, Aoife sat with the cup in her hands. Several times, she moved it to her lips, then lowered it again. Finally, she rose and went to the window, tossing the cup’s contents onto the dirt below.

The next day, she learned that a delegation had arrived to ransom her, driving a herd of cattle and a wagon full of intricately woven cloths, carved inlaid boxes, gilt harps studded with jewels, a dozen big bronze cauldrons, and several gold chalices.

“There will be feasting,” said the Hound. He began to kiss her neck. “You pretend not to like it when I do that,” he told her, lifting his head. “But I feel you shivering.”

“There is no need, Dog. Cepp says our son is here, in my womb.” She gestured downward. He laughed for joy, and placed his hand over her hard, flat abdomen. “Shall we try for twins?”

“If effort counted for anything, there would already be an army in my belly.” But she didn’t resist when he pushed her onto the pallet, pressing his lips to hers for the last time.

Afterward, he drew from his finger a gold ring twisted like a miniature torc. “When he is almost grown, send him to find me in Éire, and give him this as a token. He is to to make way for no man, until he reaches Emain Macha.” Surprised, she found that she was unwilling to spoil his happiness. She accepted the ring, and placed it on her own finger.

That evening, after a joyous reunion with Aibhlinn, Darragh, and other old friends, she arrayed herself in her own queenly clothing for the feast. Upon her agreement not to return to Scáthach’s lands, the older woman had restored her cuirass, rather dented.

“I shall never wear it again, Darragh,” she told him sadly. “My bond is broken. Men will not follow me into battle now.”

“And why not?” answered Darragh. “Scáthach is no virgin, but men follow her gladly.”

“My bond is broken,” repeated Aoife. “Brigid will not forgive. Besides, my belly will be swollen soon.” She thought sadly of her son’s fate. Better to live a short life in health than never to live at all. She would share this secret with no one. Perhaps, before he met his doom, the boy might live to seek out his father. Connla, she decided. His name is Connla.

“Then marry me and let him be reared by a father and a mother.”

Yes, Darragh, you wish to take my place as battle-leader, and rule as my consort. She picked at her roast pork. She had begun to feel queasy that morning, and had little appetite. “I will not lie with you,” she told him. “My geis may be broken, but I will never lie with a man again.”

“I know,” he said quietly, and took her hand.

Notes: There is nothing in the original saga about Aoife terminating her pregnancy, but the ancients had ways of doing this, both pharmaceutical and surgical. They also (at least in the Mediterranean world) practiced “exposure,” which is a euphemism for infant abandonment. While this seems inhumanly cruel, we must remember that people faced terrible choices in those days. I remember the first time I understood this type of choice, as a girl, when reading The Good Earth by Pearl Buck. It tells of O-Lan, a Chinese woman in a famine-stricken village before WWI, who kills her daughter rather than see her die slowly.

In my story, Aoife’s choice is different, but just as heartbreaking, whether to carry her rapist’s child. It’s a relevant issue even in prosperous times, and in the context of my story, it is central for Tabitha, who is herself the daughter of a rapist. Aoife decides to keep her son and name him Conlaoch (=Connla), “Highest Chief.” In Irish legend, “Connla’s Well” was an otherworldly spring, the source of all the rivers in Ireland and the home of the “Salmon of Wisdom.” (I love the fact that salmon are so prominent in Irish legend–symbols of heroic strength and wisdom–even if it also makes me chuckle a little.)

“The Salmon,” from the “Druid Animal Oracle” by Will Worthington.