As part of my Jane Eyre blog series, I’ve been reading through lots of reviews on Amazon to see how film versions are perceived by viewers–especially the Hinds/Morton version, of course. What strikes me the most is how women either love or hate this version. Mr. H.’s portrait of Rochester as an angry, insecure man is often responsible, but sometimes they just hate his mustache or his hair. Morton comes in for her share of praise and criticism too. And the screenplay is panned for the heavy re-writing (true enough). I’ve picked out some choice bits from both sides of the spectrum.

Hands down, my favorite misspelling of his name is “Quieran Hinds” (though I recently heard of an intriguing contender, Mister Ciaran Hands).

When I first saw Ciaran Hinds (Mr. Rochester) I thought – this man isn’t very attractive and he is really mean! Jane Eyre will never fall for him! But, Mr. Hinds played the role wonderfully and even I looked beyond his roughness and fell in love with the character! Samantha Morton played a wonderful Jane Eyre and I really felt the chemistry between the two throughout the movie.

“A stern and rugged hell of a man”

Mr Rochester (Hinds) Is a not too handsome of a man ( but I think so), that is a stern and rugged hell of a man. When Jane comes, she is soft and not aware of what a man really is. The two give “performances of a lifetime”. I would have to die first before I would let this movie go. Shows what love is supposed to be. “Inner love”.

I thought Ciaran Hinds was terrible as Mr. Rochester. He was far more blustery than smoldering, and the scene at which he screamed at Jane while she drove away disturbed me. He seemed more like an abusive boyfriend than a man overwhelmed with pain and passion. 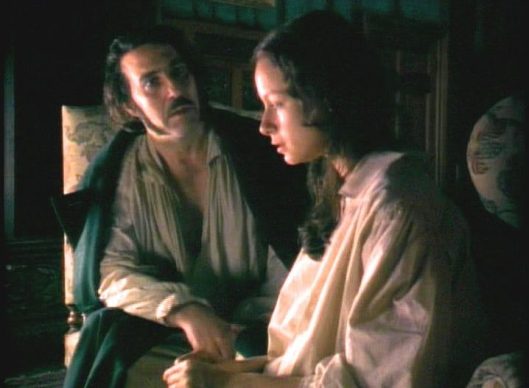 “He had a tender side”

Ciarán Hinds, who I usually love, plays Mr. Rochester as a raving lunatic, not a tortured man who’s life has been turned upside down by an unfortunate mistake as a young man. There is no chemistry between the characters and the dialogue/plot differs so much from the novel it is a travesty to call this ‘Jane Eyre.

In particular, the actor playing Mr. Rochester portrayed him as a TOO angry, sneering, ranting, bellicose, offensive man. (I don’t know whether I should blame the actor or the director).

I was horried to witness Ciaran Hinds screeching and screaming all the time like he was having a never-ending PMS. And let me just say I love Ciaran Hinds. He is a truly talented actor, amazing in Persuasion and Phantom of the Opera, not a one-note actor by any means. I dont understand what could possibly happen here. Did he so grossly misunderstood the character?

Wonderful. I loved the book since I was a child and when i saw version of Jane Eyre with Timothy Dalton, I didn’t think anything could top that. However, this one is fabulous as well. Ciaran Hinds is perfect as Mr. Rochester. After seeing this movie I became a big fan of his. If you like good love stories this is a must see.

I thought Ciaran Hinds as Rochester was wonderful. He was very close to how I imagined Mr. Rochester in the book. Not handsome but rugged and likeable. He did tend to be a bully somtimes and that was a negative but he also had a tender side that came out through his facial expressions in a number of scenes between he and Jane.

And [Morton] looked nineteen, which is nice. However, this served to highlight the creepiness factor when Ciaran Hinds as Edward Rochester comes growling and cussing into the story, acting more deranged and dangerous than his imprisoned wife. The Hitleresque mustache, looming posture and unblinking stare make him more menacing than sad and brooding. He barks and snarls his lines with no hint of the intended facetious humor and vulnerability that make Rochester a redeemable character. When he does make romantic overtures toward Jane, it feels repellent and lecherous. Not sexy at all. It seems like Jane needs an intervention rather than finds the love of her life. 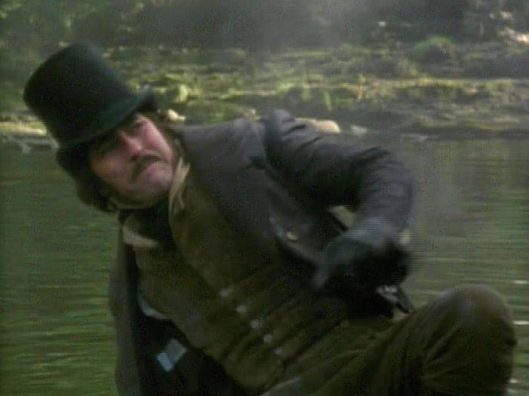 Ciaran Hinds is a bellowing, buffoonish Rochester who inspires no sympathy or affection. Why WOULD Jane care for this overbearing, oversexed lout? All the subtle but passionate longing that Rochester evinces for Jane (in the novel) is reduced to eye-rolling, sweat-beaded-brow lust. Hinds grabs one side of the admittedly luscious (and well photographed) scenery and chews his way through to the other side; unfortunately, he leaves the true essence of Rochester behind him in his journey.

Cirian Hinds resonates with the dark, seething energy which is Mr. Rochester. His portrayal is fantastic!

Ciaran Hinds does a wonderful job portraying Edward Rochester, a complex, authoritative and tortured man who is hiding a horrible secret. He is supposed to be almost 20 years older than Jane and not overly handsome–although not as moody and dark as Orson wells, he gives the character more humor and fits the bill admirably.

“Best chemistry on the screen”

This version is one of the best adaptions I’ve ever seen. I can’t get enough of it!!!
It this particular version a lot of events were dismissed and rewritten, but what you can expect from not-even-2-hour movie!? Also didn’t like Mr.Rochester in the beginning, he was hateful, mean, arrogant, bad-mannered, not quite Charlotte Bronte’s description and again -still handsome (in the book he wasn’t handsome man). But with the movie’s progress he becomes quite Bronte’s Rochester.
I JUST LOVE the passion between Jane & Mr.Rochester!!! The both actors are brilliant!!! How they felt each other! Best chemistry on the screen. Also like to see Gemma Jones as Mrs.Fairfax – wonderful! (I’m her big fan).

I’ve seen the Hinds/Morton Jane Eyre many times, each time I see more and more pure acting ability from Hinds than any other actor in this role, his facial expressions portray as much as his spoken lines. Hinds in excellent in portraying the gruffness and hard edge of Rochester yet tenderness in his passion and love for Jane–Hinds brings Rochester to life. The last scenes of this movie with Hinds’ and Morton’s recital of love and devotion for each other are nothing short of astounding. Hinds’ tears were real as he poured out his heart to Jane that he was no longer worthy of her, how could she love him now as a wounded blind man unable to care for her–amazing acting on Hinds’ part.

“His tears were real…nothing short of astounding.”

Ciaran Hinds is an elusive blend of understanding tenderness and explosive passion – of course Rochester would be full of pent-up passions just waiting to be unleashed – with the kind of past he’s led. And Ciaran certainly lets us feel what is in his heart and soul. I absolutely love the little-boy glimpse you get of Rochester as he confronts Jane in the driveway after she returns from the visit to her aunt….Ciaran Hinds was wonderful in “Persuasion” but, Oh My! he really shows his passionate Irish heritage in this film! I love it!

“An elusive blend of understanding tenderness and explosive passion”

No, he’s not a handsome man like Colin Firth in Pride and Prejudice, but he’s attractive in a different way- very masculine- his eyes are magnetic. Besides, anyone obsessing about whether or not he’s eye candy is missing the point that Jane so eloquently makes: she does not care for his appearance. She loves him as the person he is. Mr. Hinds has the ability to give his characters that larger than life feel- His voice is thundering, his gestures are sweeping, but he does not overact. Plus, the chemistry he has with Samantha Morton is incredible. You can feel the tension and sensuality flowing between them, even when all they’re doing is shaking hands.

“A glimpse of the little boy…”

In particular, the actor portraying Mr. Rochester gives one of the worst performances of a Rochester I have ever seen. He’s so hotheaded and violent it’s difficult to see what positive traits Jane sees in him. This is no sardonic hero.

“His eyes are magnetic”

Alas reader, … the screenplay. I hated it. For instance, the “after fire” scene was especially atrocious as Rochester comes off as a nasty lech and Jane has a sort of orgasm entering her room after it. YUCK! All tenderness out the window in what is supposed to be a scene about awakening love, not a lust-fest!… Also, the ending, though the dialog is not exactly from the book, was extremely touching. They are both excellent in this scene.

“Leaves me weeping helplessly by the end”

Ciaran Hinds IS Edward Rochester. I have read the book multiple times, and none of the other actors I’ve seen quite fit the physical description. Ciaran Hinds is perfect. He fits perfectly. The man is amazing, and Samantha Morton is superb. She strikes the perfect balance between quietness and spirit. The only problem I had with it was the fact that they left out one of St. John’s sisters. That is it. The chemistry between Hinds and Morton is unspeakably beautiful. I normally do not cry at movies, but this one leaves me weeping absolutely helplessly by the end. Edward Rochester is my favorite male character ever in any book I’ve ever read (and I’ve read quite a few). Ciaran Hinds captures the essence of Rochester.

Hinds is a true Rochester, both physically and spiritually. He dominates the screen with his powerful personality: the original character is not at all handsome, he’s often emotionally abusive, but still manages to be fascinatingly charismatic and sexually desirable. Hinds is a perfect image of a dangerous, romantic, imposing Byronic ‘doomed hero’, a rake eventually tamed and redeemed by marital love.

“The most disgusting onscreen kiss I’ve ever seen”

Mr. Rochester was disgusting. Then, when Jane and him profess their love for each other, I think that was the most disgusting onscreen kiss that I’ve ever seen (with the exception of anytime that Kevin Costner kisses). The acting was so overdramatized at that point that I had to turn it off b/c I felt like gagging. 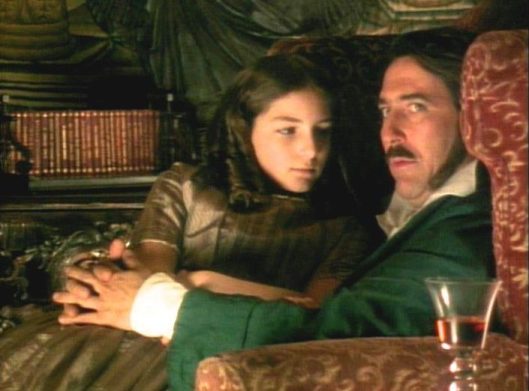 So you see, Dear Reader, de gustibus non est disputandum (There’s no arguing over taste). Personally, I would agree that Hinds’ Rochester is too angry, but there is some warrant for that in the book, to say nothing of the screenplay (admittedly flawed). As for the charge of lechery, I think that’s in the minds of the beholders, some of whom interpreted Hinds’ abundant sexual charisma this way and found it threatening. But anyone who thinks Rochester is a virtuous, Darcy-like gentleman with his passions well under control needs to read the book again.

I have had this version for a couple or years. I loved the very original and saw it multiple times, but this version with Quieran Hinds is by far my favorite……and the hero is perfect, in anything, He is my favorite actor. Samantha Hinds is excellent, also. 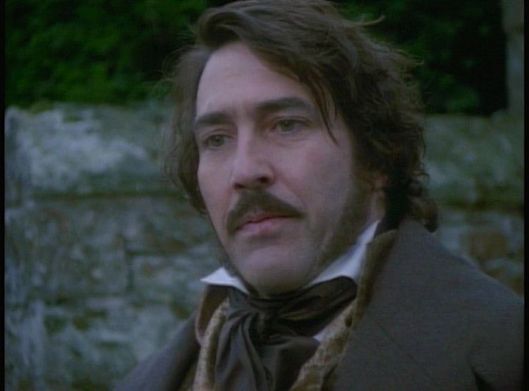 “He is my favorite actor.”

50 thoughts on “The People Speak: Ciarán Hinds in “Jane Eyre””