For years I have longed to eat at Per Se, Thomas Keller’s shrine to New American/French cuisine in the Time Warner Center. I pored over foodie photographs online and noted the vegetarian tasting menu. I even concocted a gently satirical fantasy version of the place for one of my novels, dubbing it Ipsissimus (the superlative of the Latin word for “Himself”) and supplying an Aleister Crowley-like chef who “approached food with the perfectionist ethos of a concert pianist and the esoteric, mystical fervor of an alchemist.”

The famous blue door beckons you into a place of serenity and pleasure. It recalls the blue door of Thomas Keller’s restaurant in Napa, The French Laundry.

Per Se holds the coveted three star designation in the Michelin guide. And until very recently, it had a four star rating from the New York Times, which in 2011 called it “the best restaurant in New York.” In January, however, Pete Wells slammed Per Se, demoting it to two stars for what he deemed sloppy service, clumsy dishes, and (his pet peeve) poor value for the money. Indeed, Per Se is currently the third most expensive restaurant in the world. And up until Wells’ takedown review, I could never manage to get a table. (Thanks Pete!) 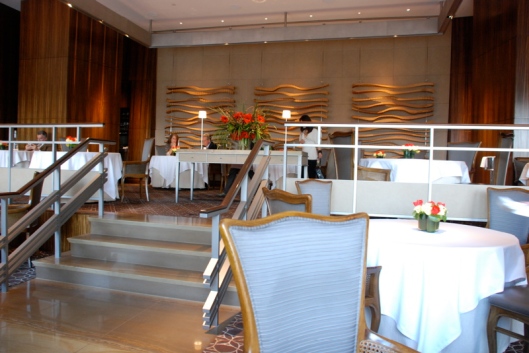 The main dining room as it looked in 2008. This is a white linen tablecloth kind of place, and I hope that never changes. We sat at the table upstairs and to the right, which gave a great view of the park. Photo: Wikipedia. 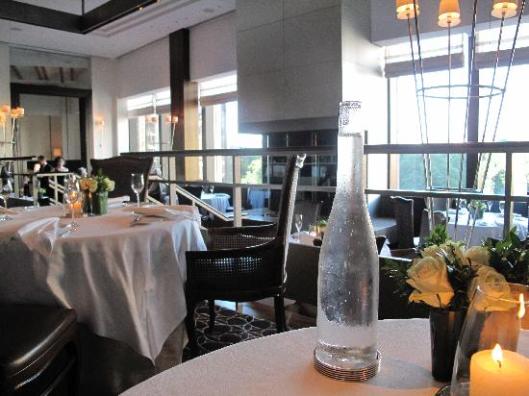 Another interior view of Per Se. I like this photo because it gives a sense of the restaurant “in use.” I was given a little cushioned stool on which to set my handbag. Photo: Tripadvisor.

Wells is gaining a reputation as a “populist hero” for his critiques of élite and celebrity-chef restaurants that charge outrageous prices for mediocre food. He is particularly suspicious of places that fawn on critics and VIPs, but look down their noses at tourists and birthday splurgers. I couldn’t agree more. But we experienced nothing like that at Per Se. We were celebrating a birthday, and we’re from out of town. Everyone was friendly and solicitous of our comfort, without being obsequious; nor was there any hint of snootiness. But what about the question of value? Is it ever worth that much money to eat in a restaurant?

Per Se is more than a place to eat. It is a place of worship, where people go to experience the venerable rituals of haute cuisine. It is a museum of edible art. But most of all, it is culinary theatre, a choreographed performance by chefs and servers in a custom-built space devoted to the pleasures of gastronomy. For a Broadway show, I have often paid two or three hundred dollars to wait out in the cold, then sit for two hours in a cramped “premium” seat, punctuated by a panicked dash for the overcrowded ladies’ room during intermission. Was it worth it? Usually, yes. Then how much more value is to be found in three or four hours of the ultimate theatre of food, enjoyed in perfect comfort, with a sublime view of Central Park?

Columbus Circle and Central Park from the second floor of the Time Warner Center.

Oh yes. Totally worth it.

Not that every expensive restaurant is a good value. Before going to Per Se, we had a disappointing experience with the vegetable menu at Dovetail. The prix fixe menu is $120 and they have received excellent reviews. I was expecting fireworks, but got misfires. We ate woody, fibrous white asparagus that I could not cut, tough and stringy “cured” carrots, and a piece of chayote squash that was intriguingly crispy on the outside, but unpleasantly watery and grainy on the inside. It’s a lovely space, and the service was excellent, but I did not feel that I received value for the money. 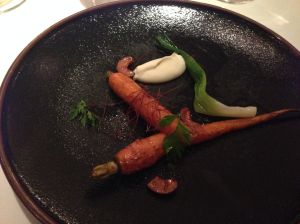 Cured carrots with white bean purée and coffee cashews at Dovetail. It was edible.

Vegetable menus are rather in fashion at the moment, but not everyone has a way with veggies. Let’s face it, it’s easy to make an expensive cut of meat taste good. But only a kitchen alchemist can turn a mundane fruit or vegetable into the Fifth Essence. Let’s begin our journey.

The meal starts with these tiny gougères, puff pastry balls filled with warm gruyère. They leave you wanting more, MUCH more, which is what an “appetizer” ought to do.

I asked for a Sauvignon Blanc and the server suggested the Domaine Thomas-Labaille “Les montes damnés” Sancerre. It was deliciously complex, and later I discovered that the vineyard in Chavignol is known as the finest for Sancerre. The wine is considered an excellent value ($25), so I can afford to buy it myself. Now that’s what I call good wine service! The Long-Suffering Husband asked for a Chardonnay with oak and got Knez Winery Chardonnay from the Anderson Valley in California (2013). Yummy…

Most of the tableware at Per Se is pristine white, to show off the food, but how pleasant to begin with this beautiful golden trompe l’oeil plate. I’m sure it’s Limoges or something, but I didn’t lift it up to check! 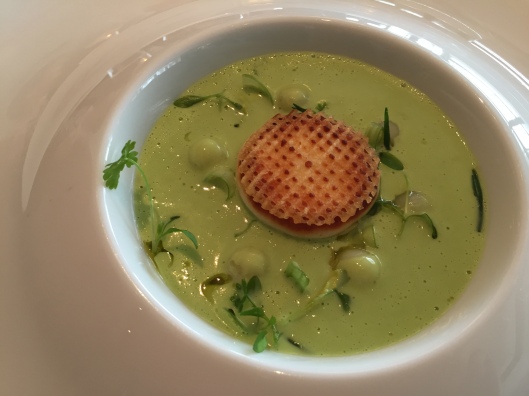 First up was the smoked cabbage “vichyssoise” with Yukon Gold potato “blini” and truffle-infused custard. This was my favorite dish, savory and complex, with a texture like silk. 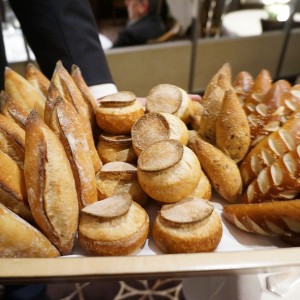 I love the bread service at Per Se, with all the mini breads to try. Baguette, sourdough, multigrain and pretzel were accompanied by two artisan butters. Truly a highlight.

One of the pleasures of Per Se (for me anyway) is the miniaturization of all the dishes. In order to enjoy several courses and sample many flavors, one must eat tiny portions. The scale of the food affects the way it is presented on the plate.

Next, the pastel salad of preserved green strawberries, ginger pannacotta (the custard-like layer under the salad), ruby beets, compressed chicories and aged balsamic. The garnish is a delicate spiral of something crispy. This had so many flavors, yet they all melded harmoniously. 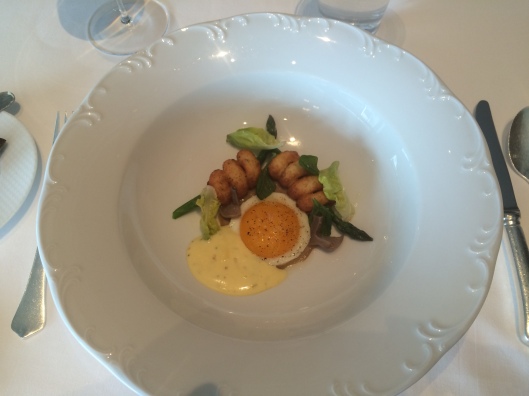 The Sacramento asparagus with sunny-side-up egg, gnocchi à la parisienne, bluefoot mushrooms and béarnaise. Asparagus is of course a seasonal dish (although there were only two tiny spears) and a classic pairing with eggs. Béarnaise sends me straight to heaven, so I loved this dish, even if the gnocchi could have been fluffier.

By this time I was ready for another glass of wine. I asked for unoaked Chardonnay and got the Domaine Bernard Defais “Vaillons” Chablis, 1er Cru 2013. It was so delicate that I wondered whether it would stand up to the pasta dish, but it had enough acidity to work well.

The pasta course was potato and nettle agnolotti with favas, artichokes and red pepper “pudding”. The crispy ring is called a “brioche melba.” This one was a mixed experience for me because I loved most elements of the dish, but found the pudding too sweet. The Long Suffering Husband loved it. 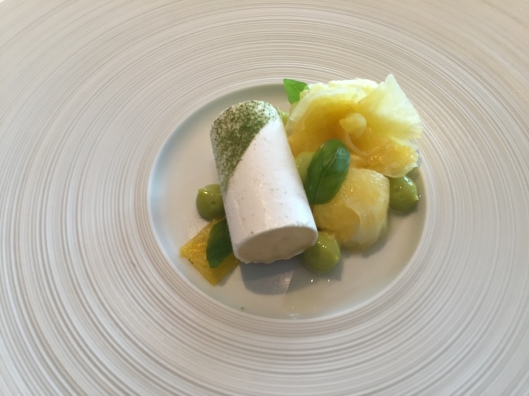 The palate cleanser was this delightful rosette of pineapple, accompanied by something creamy enclosed in the thinnest of meringue shells and dusted with matcha. Lovely. 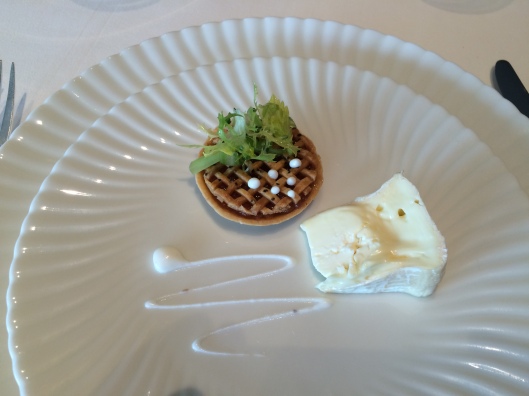 Now it was time for dessert. Even though I had longed for the full nine-course menu, I was glad we only got seven courses, because by this time I was getting very full. And there is never just one dessert at Per Se. We ordered coffee and braced ourselves for the onslaught. Our guest was celebrating a birthday, and Per Se did not disappoint. 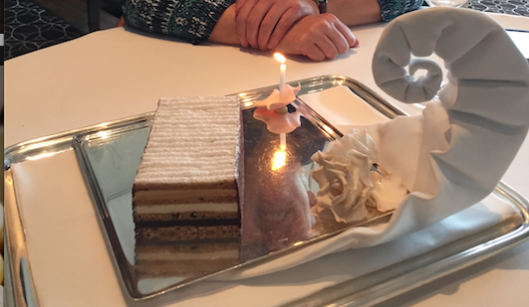 Presentation of the birthday cake, with layers of chocolate ganache, hazelnut praline, and meringue. 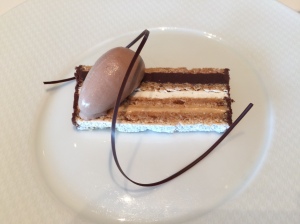 The plated cake with chocolate ice cream (or gelato)? In any case, it was very, very good.

The end-of-meal treats include a selection of chocolate confections. The server recited all twenty-four. I chose olive oil-rosemary and pink peppercorn-hibiscus.

“Coffee and Doughnuts” is a famous Keller dessert consisting of coffee semifreddo served with cappuccino foam on top, and feather light doughnuts (really doughnut holes) which are like the best beignet you ever had.

Below left, the “doughnuts,” together with the petits fours: truffles, macaron cookies, assorted nougats and caramels. By this time I could barely eat anything (quel dommage, with such riches before me!) but I did save a caramel to enjoy later. I’m a caramel buff, and yes, it was spectacular.

If I could change anything about the Per Se experience, I would switch the balance of the meal so that there are more savory nibbles at the beginning, and only one dessert (or even just the petits fours) at the end. I would also like to see the cheese course multiplied to two or three. But that’s just me.

Our guest received a goodie bag with Per Se chocolate bars, shortbread (with extra tins for us) and a menu inscribed by chef Eli Kaimeh. All in all, it was a sublime piece of food theatre, deserving of a standing ovation. I found Per Se to be less pretentious and more welcoming than other expensive restaurants I have visited, with food that charms and delights. True, it is very expensive. But I hope to visit again one day.

PS: If you enjoyed this post, you may also like my paean to sublime restaurant service. Per Se certainly ranks among the best I’ve ever seen.

24 thoughts on “Culinary Alchemy at Per Se”