Freud famously pronounced himself perplexed by the question “What does a woman want?” It never occurred to him that different women might want different things, and certainly not that a woman might want the same things a man does. I think he was right, however, to recognize that sexuality is a much stronger force in human lives than we are willing to acknowledge. 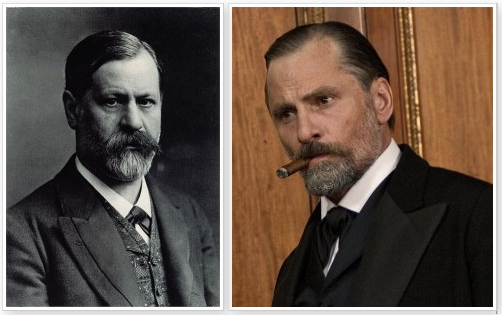 In most photographs of Freud, he has this intense, glowering look. I thought Viggo Mortensen made an excellent Freud in the film “A Dangerous Method.”

My colleague, Inclusus Amator, asked me to give you some practical advice this week on how to attract girls. First of all, if you don’t have facial hair, consider a stubbly look or a mustache and goatee. Research shows that women find men with facial hair more masculine and sexy. Second, lose the cologne. Most brands don’t work. Let your natural pheromones play their role. With American girls, bathe daily but don’t use deodorant. With European girls, you can skip a bath and give them the smell of the jungle. Finally, you should walk with your legs slightly apart, like you’ve got a significant weight between them. Once I started doing this, I noticed a major spike in the amount of attention I got from girls. —Gaius

Subject: Gaius a danger to himself and others

As a Parnell woman who has read your website with interest, I have to point out that whereas your own advice is usually right on, Gaius seems like an idiot. Facial hair may be attractive on the right man, but it’s annoying during lovemaking. The sexiest smell on a man to me is Ivory soap, certainly not B.O. And if I see a man walking with his legs apart, I suspect he is recovering from the mumps. Yours truly, Cloelia

Subject: My Kind of Girl

Cloelia, there is nothing I like better than feedback from girls. Feel free to write any time. I stand by Gaius’ advice about cologne and deodorant, unless a man is working out or it’s a hot day. His recommendation for daily bathing is reinforced by your liking for the scent of soap. Not boasting facial hair myself at the moment, I am delighted that you prefer a clean-shaven lover; in fact, I spent a pleasant few minutes imagining the basis for your preference. As for the walk, be kind. Some of us can’t help it if we’re well endowed. — Amator

Casting about for a service learning project, Amber noticed a piece in the Parnell Leader about the ongoing contract negotiations between PSU and the university chapter of the American Federation of State, County and Municipal Employees. Perhaps she could do some volunteer work for the union, in exchange for a chance to observe the bargaining. That kind of experience, she believed, would set her apart from other law school applicants. She tracked down the chapter president Larry Donato, a beefy, white-haired man who worked in University Receiving, unloading the vast daily influx of everything from office furniture to weed killer. When she explained that she was seeking an unpaid internship, Mr. Donato seemed wary, and tried to discourage her.

“AFSCME has never had internships or student volunteers. Except when we went out in ’92,” he amended. “A couple of students helped us paint signs and such.”

“Well, according to the papers, the negotiations are stalled. If you do go on strike, wouldn’t it be great to have a volunteer already in place?”

“We’ve got a ways to go before then,” he said, rubbing his chin. “Our contract calls for us to use a federal mediator first. What kind of work could you do in the meantime?”

“You tell me,” she replied quickly. “I can make coffee, write letters, take notes —I use my own shorthand system. Anything you need. I want to see what goes on in your talks firsthand.”

“You say you’re good at taking notes?” He frowned as he thought this over. “Maybe you could take notes at our bargaining sessions instead of Doris. That would free her up to say more at the table. But the other side would have to agree. We have groundrules about who can be in the room while we bargain. First, you’ll meet the team. If they like you, we’ll think about this some more.”

Amber met the other three members of the bargaining team that afternoon. One was Doris Paisley, a muscular-looking blonde woman with a heavily tanned, leathery face. She worked outdoors every day, landscaping, picking up trash, or shoveling snow, depending on the season. In spite of her tough exterior, Doris had a soft spot for flowers. The annuals used to decorate the grounds were grown in Parnell’s own greenhouses, something Amber hadn’t known. Since she was interested in flowers, Doris promised to give her a tour.

Next was one of the custodians, Dennis Potts, whose short, solid frame brought to mind a bull terrier. Dennis had a suspiciously tan face, and blindingly white teeth. When Amber complimented him on his smile, he sheepishly explained that his bride came from a silk-stocking family in Rimini, the next town over from Parnell. Her father owned three pawn shops in Rimini and the surrounding towns, and the new Mrs. Potts had made it her project to improve Dennis. His job at PSU was to clean Chester Hall after everyone else had gone home.

“Usually I come in at ten p.m.,” he said, “so these late afternoon sessions are like morning for me. They ain’t the most convenient, but we can’t hardly bargain at three in the morning, can we?”

“As if they’d let us use paid time to bargain,” groused Doris.

Dennis told Amber how he waxed the floors twice a year, and scoured them nightly when winter ice and sludge were tracked in. He cleaned every restroom, and emptied the trash in every faculty office. Dennis didn’t have a high opinion of the faculty members at Parnell. “You wouldn’t believe what comes out of those cans,” he said, shaking his head. “Rotten food— and trash they bring in from home to save on their own bills. Dirty diapers. Used condoms.” Larry, aware that Amber’s mother was a professor, frowned at him, and he subsided.

The fourth team member was Virgil Dempsey, a tall, wiry man with a deep espresso voice and a spectacular walrus mustache. She judged him to be in his forties, as his dark hair showed only a sprinkling of grey. He was dressed in boots and heavy work pants. The neck of his navy blue shirt was unbuttoned far enough to reveal his undershirt and a thick mat of chest hair. A can of Skoal had impressed a permanent circle on the back pocket of his pants, and his tool belt lay on a table nearby. Virgil worked in the power plant and dealt with HVAC issues across campus.

“You’re named for my favorite Roman poet,” she told him. Although his mustache made the corners of his mouth seem to turn down, she could tell he was smiling from the way his blue eyes creased at the corners.

“I was named for my daddy,” he corrected her in his deep drawl. “But yes, I know about the other Virgil.” His brows drew together. “Always thought he was a Greek, though.”

“He was a genius,” said Amber. “He was mobbed by admiring crowds whenever he showed his face at Rome. But he was shy. They called him Parthenias, the Virgin.” A crack of laughter was heard from Doris, and Dennis sniggered.

Virgil, who had been listening carefully to her remarks, said, “I guess we don’t have much in common but our name.”

“Yeah, Virgil sure as hell ain’t no genius,” quipped Doris.

“I sure as hell ain’t no virgin,” he clarified. He tilted his head, taking in Amber’s figure, and winked at her. “Maybe you’d like a demonstration?”

“Jesus, Virgil,” said Larry. “You want to be brought up for sexual harassment?”

“It’s okay,” Amber told him. To Virgil she said, “Thanks, but I’m not here for that kind of education.” This earned her another laugh, and gave her more confidence in pitching her idea. They heard her out, and then Larry said the team would discuss it, and he’d get back to her.

A week later, she received a call. “The other side said OK, but you’re not to make a sound while we’re bargaining, you’re to keep everything confidential, and you’re not to sit at the table.”

Amber felt a rush of elation. She was in! This moment was the start of her legal career.

“Report to Doris on Tuesday in the late morning,” continued Larry. “She’ll show you how to make the coffee.”

Notes: When I was in college, I planned to become an attorney and perhaps ultimately a judge or a legal scholar. I’m glad I didn’t follow that path, but I think Amber is well-suited for it. On the other hand, I did end up amassing a lot of experience as a union leader. They say you should write what you know, and the “labor” subplot in this story is based on what I’ve learned over the years about the subject in the context of public universities.

Men, it seems, are still struggling to answer the question “What does a woman want?” Two pieces of advice for attracting women that I picked up online are to “give them the smell of the jungle,” and to walk with legs slightly apart. Which proves yet again (if any proof be needed) that truth is stranger than fiction.

10 thoughts on “The Libertine Belles 10: What Women Want”