Zombie posts all this week while I am in Germany giving a paper, drinking beer and not eating sausage. I’ll respond to comments as soon as I can!

There’s a theory that the Archaic Smile represents a technical problem of working with stone, which later hardened (so to speak) into a fixed convention. The best piece of evidence for this is the fallen warriors from the pediment of Aphaia’s temple on Aigina. Even though they are dying, their faces still wear the faint smile. It would be another 200 years before the Greeks began to show grief and physical pain in the faces of their sculpted figures.

The warriors were made ca. 500, when the conventions of Archaic art were yielding to a new realism. Photo: Wikimedia; from the Glyptothek in Munich.

The body of this warrior looks amazingly realistic, but the face hasn’t quite caught up.

In August, four months after the Institute conference, Andy received an email message from Max inviting her to deliver a talk to the students in his seminar on Black-Figure vase painting. This was a specialty of hers, and she recognized the invitation as an olive branch. So far, no article denouncing the Philadelphia Apollo had appeared, but it was too soon yet. If he had submitted something, it would take about a year to appear in print. She decided to go. She hadn’t been to New York in ages, and she could treat herself to a book spree in the Strand, sample some fancy cupcakes from one of the fashionable bakeries, or sit in the reading room of the New York Public Library and gaze up into the clouds painted on its coffered ceiling.

The seminar was scheduled for a Friday, so she took the train on Thursday night and settled in. She chose a good hotel and it wasn’t cheap, but Max had invited her and he could worry about the bill. It was convenient, only a few subway stops from Washington Square. The next morning, Max arrived early to take her to breakfast. He was dressed more casually than at the conference, in jeans and a microsuede sport jacket. His hair was a little longer, and fell in waves over his forehead. In back, a hint of curl barely touched his collar. There were small bags under his green-brown eyes as he greeted her with a hug and kiss, as though he hadn’t slept well the night before.

He took her to a Zagat-rated place near the campus, which was noted for its waffles. After their food arrived and they sampled it, she said, “I cleaned out John’s office. I found your letters to him.”

He looked surprised. “He saved my letters? Which ones?”

“All of them, I think.” She speared up a bite of waffle with strawberries and whipped cream. It was delicious.

“It never occurred to me that he was keeping them.” He looked embarrassed. “Or that you would read them.”

“I’m sorry about Sandra. It made me cry, when I read what you went through. How is she?”

“Andy… would you… I know this sounds strange, but would you like to meet her?”

She considered this. “Yes, sure. If she can have visitors.”

“She lives in a facility in New Jersey. It’s about an hour to get there. We could go this afternoon.”

She nodded. Clearly this was important to him. “Max, what were John’s letters to you like?”

“Similar to mine, I suppose. About things he was reading. Are you wondering if he ever spoke of you?” His face took on an interior, wistful expression as he remembered. “He did, sometimes. He loved you very much.”

“Gods, no.” He picked up his mug of coffee. “When I left for England, I wasn’t really finished with you. After a few months, I wanted to write you, to see if you could scrape up the money to visit me. I thought I could show you the sights in London.”

“Don’t tell me you were pining for me. Not with all those other girlfriends,” she said playfully. Max had never been at a loss for female companionship.

“I hadn’t forgotten you. And then John writes to say that he’s marrying a brilliant student of his, Andromeda Whipple! He thought you were a virgin, Andy. What was I supposed to say? Sorry, Professor, but I’ve already tupped your fluffy white ewe. And by the way, she’s not as innocent as you think. She’s actually a raunchy little minx when she’s in the right mood.

“Well, you were. Remember the Twinkies?” He chuckled, and her face reddened. That day he had met her at the door with a Twinkie in his mouth, he handed her the other one. Now she remembered how she had leaned against the pillows on his bed, wearing short shorts and no top. She had bitten off the tip of the Twinkie and placed it on her breastbone. As he watched, mesmerized, she pressed her breasts together, enveloping the Twinkie and squeezing it so that the filling spilled out. Then she dipped a finger in the sweet white cream and brought it to her mouth, holding his gaze as he took a step toward her, and then another.

She shook her head slightly to dispel the memory. “I’m looking forward to meeting your students. Shall we go?”

Sunburst Assisted Care was an expensive-looking facility in Edgewater. Max ushered her past the security desk and escorted her to Sandra’s room. He knocked on the door and Sandra opened it. She was an attractive woman. Andy judged her to be in her late forties; her blonde hair was tastefully styled, but she wore no makeup. Looking at the smooth skin over her cheeks, one sensed that work had been done, but there were no noticeable scars. “Max, honey,” she said. “How good to see you.” She gave him a kiss.

Sandra’s eyes lit up. “Andy! Come in, I love visitors. We can talk in here.”

Sandra’s living space was a small sitting room with an adjoining bedroom and bath. On the table in front of the sofa was a checkerboard. She said to Andy, “Honey, do you like checkers?”

“Sure.” They played for a while. She noticed that while Sandra was reasonably proficient, she could be beaten without too much effort. If she’d been a mathematician before the accident, it was all too clear that her cognitive skills had deteriorated. Andy allowed Sandra to win, much to her pleasure. She immediately wanted to play a second time, and then a third, but Max said, “That’s enough, Sandra. Andy has to go soon. Tell us what you’ve been doing today.”

“What did you do this morning?”

“Max honey, I don’t know. Don’t ask me about that.” She looked at Andy. “Hello there. What’s your name?”

After they left, Max said, “She doesn’t really know who I am. I’m just a friend who comes to visit.”

“She calls you honey,” said Andy.

“She calls everyone honey. The Sandra I knew never said that to anyone. She would have laughed at the idea. Her personality is completely different now.”

“I can’t imagine what this must be like for you. How do you live with it?” She looked down at his left hand, where the gold wedding band still lay heavy on his finger.

“Her family says I should divorce her and get on with my life. Our son Dexter isn’t so sure about that, but he understands. She doesn’t recognize him either.”

“I’ll never stop caring for her, and seeing to her comfort, but I can’t love her as a wife, as a woman.” He stopped on the sidewalk and turned to her. “Andy, Dexter’s in White Plains with his grandparents this weekend. I want you to check out of your hotel, and spend the night with me. Tonight. Will you?”

The look in his eyes was not difficult to interpret. Max desired her, but he also needed her. She took his hand as they started walking again. “Yes. I will.”

Notes: I’m not sure how this story strayed into such serious territory, since I usually favor light and humorous fare. At this stage in my writing, I was giving a lot of thought to how one writes about (ahem) mature people falling in love. The fact is that you don’t have a blank slate. People in their 40s and 50s and beyond have had long-term relationships. In this story, I imagined what some of the complications might be. Andy married an older man who already had grown children, and when he died, she struggled with panic attacks. Max’s story is an even more heartbreaking one, but such things do happen in real life.

I was inspired by the story of US Supreme Court justice Sandra Day O’Connor, whose husband developed Alzheimer’s disease and had to be placed in a care home. His condition rapidly deteriorated, and he barely recognized his own family. He was deeply depressed until he met another resident and fell in love with her. Far from being angry or jealous, Justice O’Connor felt joy at the idea that her husband was happy again. Now, that’s true love. Come to think of it, I probably named Max’s wife Sandra because her story was on my mind.

John, Andy and Max all have two loves, yet those loves don’t dim what they feel for their first partners. I think that’s what this story is about. 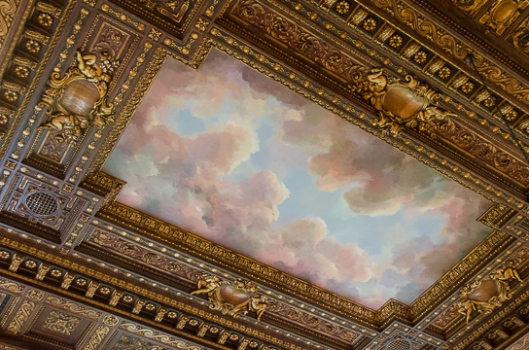 The ceiling of the New York Public Library reading room. Click for source.