Hugh Jackman is said to be starring in an upcoming film about the Apostle Paul, produced by Matt Damon and Ben Affleck. Fine and dandy. There’s just one problem. What will they do about a love interest? 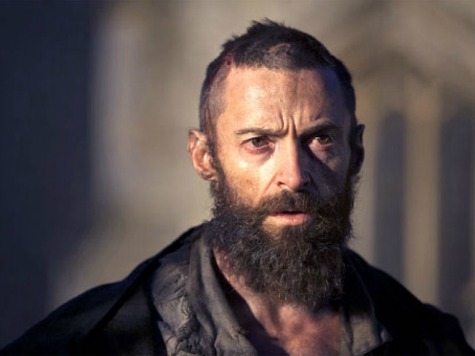 On Monday morning after her workout, Jennet went to the library to check on some Greek inscriptions. Her mind was filled with thoughts of Sebelius, and of the papyrus. Over the weekend she had checked her transcription against the entire New Testament. There was no match. Surprised, she’d expanded her search. Perhaps it was one of the noncanonical letters—Clement, or Ignatius. Nothing. The letter was beginning to look like a new Christian epistle, and if that was the case, it was big news. She’d been so certain it was Paul, that passionate, frustrating, paradox of a man. I charge you to receive and keep all that you heard when I came to you in love, proclaiming Christ in you. Now rejoice, my brothers, my joy and crown. I am content even in the trials we suffer, for the Lord is at hand. That could only be Paul, or a clever imitation.

Ever since her graduate coursework on ancient Christianity, Jennet had been fascinated by the apostle Paul, who never met Jesus in the flesh, yet spread the Christian gospel as fervently as any disciple, until he was executed by the Romans. Some scholars called him an egalitarian, ahead of his time in recognizing women’s contributions to the early church. Others pointed to passages such as those in 1 Corinthians, where he insisted that women keep their heads modestly veiled. The head of every man is Christ, and the head of Woman is Man.

Jennet laughed aloud. Paul was celibate, just like Jonathan Sebelius. And he had some rather conflicted feelings about women. If the papyrus turned out to be one of his writings, it would be… ironic. But the text couldn’t be by Paul. She’d already checked all the possibilities, including several letters attributed to him, yet known to have been composed by others under his name. A few of these were actually included in the New Testament canon, a fact that seemed to be an open secret— almost never mentioned by churchgoers or clergy, but well-known to every scholar.

Avoiding the elevators, she climbed the stairs straight up to the seventh floor, where most of the Classics books were kept. The floor held Library of Congress PA-PZ books, including English and World literatures, but she hardly ever saw anyone there now that the library had a book delivery service, and most faculty members went online to do research. It was quiet as a tomb.

Jennet was glad to be here. She loved the smell and feel of books, and whenever she used the online catalog from her office, she missed seeing the books arrayed in front of her, the serendipity of finding something wonderful three titles down from her original quarry, and the chance to browse the aisles for new items. Walking past the PR stacks, she suddenly caught sight of Sebelius with a book in his hand. He looked up and his cool blue eyes met hers. She nodded, and he returned his gaze to his book without acknowledging her. Sighing, she passed on to the far corner of the floor, where the big corpora of Greek inscriptions lay sideways on the tall stacks in uneven piles. Surveying the massive volumes, she saw they were in need of a thorough dusting. What an asshole. He can’t even say hello. Just like he barely said goodbye when I left his house on Friday. The sets of inscriptions were oversized and heavy. Whenever she came back here, she always had to do a lot of lifting to reach the ones she wanted. She checked the bit of paper with the volume and fascicle number she needed, and put down her bookbag. Perhaps she should roll up her sleeves to protect them from the dust.

A step sounded close behind her. She turned to find that Sebelius was only about a foot away. She hadn’t heard him coming. He stared down at her, and the blue of his eyes seemed to darken. She was opening her mouth to speak when he took hold of her shoulders and fitted his lips to hers, tilting his head deftly to one side so their noses didn’t collide. Jennet was so surprised that she jumped, but he didn’t let go. His mouth was warm and open, and his tongue was already touching hers. He moved one hand to her waist and pressed her against him, while the fingers of the other hand cradled the back of her head. The kiss was so unexpected that it was like falling into an alternate reality, one where Sebelius was not cold and reserved, but passionate, hot… and hard. Oh. He’s definitely not impotent. Her body responded to him fully, while her mind churned with questions. Even these receded as a wave of pleasure washed over her, carrying streams of desire that emanated from low in her belly. Both her hands crept around his waist and up his back, lightly tracing the muscles there. Suddenly he broke the kiss and his hands dropped from her like lead weights. He turned on his heel and stalked away without looking back.

Well. What the hell was that? She was still reeling from the nearness of him, the intensity with which he had seized and held her, and the naked look of eros in his eyes. After a moment she walked to the end of the aisle and looked around, wondering whether he was still there, and whether anyone else had seen them. No sound. Still tingling, she returned to the Greek inscriptions and began hefting them into piles.

Sebelius ran quickly down the stairs, mentally lashing himself for his stupidity. He’d given in to what seemed to be an irresistible compulsion. As soon as he saw the Woman pause at the end of the aisle, give him an inscrutable glance, then pass on toward the other end of the floor, he was transformed into a stunned spectator of his own folly. As though from some alien vantage point, he watched himself pursue her, take her into his arms, and kiss her. Then, abruptly, his perspective changed. The feel of her soft mouth under his, her hair tangled in his fingers, her slim waist beneath his right hand— it was indescribable. He could still feel the pressure and heat of his erection, though it was rapidly fading as he contemplated the likely results of his inexcusable behavior. Jennet Thorne was a rabid feminist. She’d probably file a sexual harassment complaint this very afternoon. That is, if she wasn’t calling the police on her cell phone right now. He was doomed, and every one would know his shame. Jesus Christ, what if Jenko finds out? He might even lose his job. A damned fool. Brought low by a woman every time. He was jumpy and nervous for the rest of the morning, waiting for the axe to fall. That afternoon, he did such a terrible job coaching that one of the team members took him aside and said he looked ill. He really should go home.

He waited on tenterhooks as Tuesday, Wednesday, and Thursday morning passed. Nothing happened. No police came to his door, and there was no phone call from the dreaded Office of Equal Opportunity and Affirmative Action. He and the Woman had an appointment to meet at his house this afternoon. Would she actually show up, after what he’d done?

During those three days of tense, anticipatory dread, he had relived the moment of the kiss over and over. It finally occurred to him to question what the Woman’s response had been. He had been so consumed by his own desire that he couldn’t be certain of his memories, but… hadn’t her lips shaped themselves to his? Hadn’t their tongues mingled? He had a strong sense-memory of her hands moving under his arms, her fingers creeping up his back to his shoulder blades.

Now, feeling oddly superstitious, he dressed in the same clothes he had worn during her visit the previous week. He moved restlessly about the house, making sure it was spotless, adjusting a pillow here, and there the angle of a rug. The minutes ticked by until the grandfather clock at the end of the hallway struck three. Nothing. Cursing himself, he actually went to a window and looked out at the street, willing her to be there, yet dreading her arrival.

After five more minutes that felt as long as an hour, he saw the blue Civic coming down the street and hastily withdrew from the window, his heart pounding. He went to the door and forced himself to wait ten seconds after her knock before he opened it. 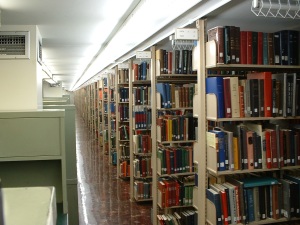 The kind of stacks I’m used to.

Notes: The most cracking fun of this chapter was composing a scrap from the “Pauline” letter and having Jennet remark to herself “That could only be Paul, or a clever imitation.” But so much of this is drawn from life. Jennet’s experience with the books is all real. These days I scarcely get over to the library stacks, because they have taken most of the books away. We must order them online, and have them delivered. I used to wander dreamily through the stacks, examining the books and coming across all manner of interesting things. Happy days.