I finally watched The Lost Son after lengthy procrastination. My hesitation was due to the film’s topic: child sex trafficking. Not my idea of how to unwind on a Friday evening. Still, as a Ciarán Hinds completist, I resolved to see it. It’s from 1999, the same delicious period as L’amante perduto and Il Tempo dell’Amore. It is another of the “small but pivotal” roles that are inevitably assigned to “the always excellent Mr. Hinds.” 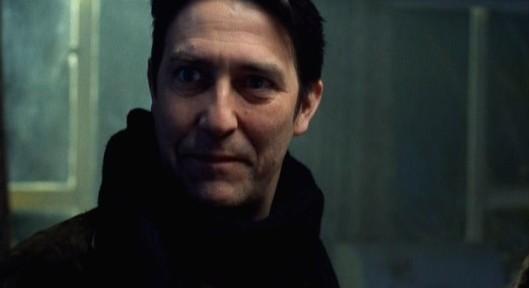 Before I launch into the film itself, a word about degrees of separation, and the Irish connection. Chris Menges, who directed The Lost Son, started his career as a cinematographer for Ken Loach (a Mr. H. favorite). He also shot Michael Collins for Neil Jordan, and The Boxer for Jim Sheridan (written by Terry George of the Oscar-winning short film The Shore).

Daniel Auteuil is wonderful in this film. My favorite scenes are the ones where he is smoking and looking very Gallic.

You can tell that The Lost Son was directed by someone with real expertise in cinematography. It is beautifully lighted, the story plays out in exquisitely chosen locations, and every frame is carefully composed. That in itself gives it an appeal lacking in most thrillers. The pace is also slower than Hollywood-style thrillers, without the frenetic cuts designed for people with five-second attention spans.

Having said that, I must also recognize that the plot is familiar: troubled ex-cop gets in over his head and ends up running a one-man crusade against the bad guys. In a last minute twist, he discovers that a person he thought he could trust is his worst enemy. In the end he succeeds, but it doesn’t put an end to his personal despair. Now, who do you suppose is is cast in the small but crucial role of the friend who seems supportive, but turns out to be a villain? 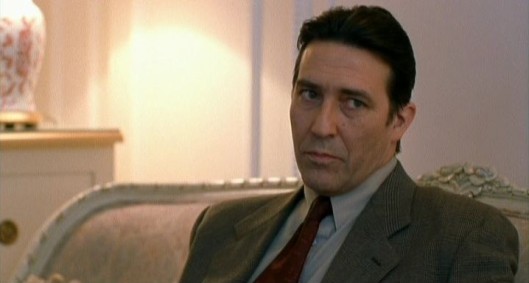 “Aw, shoot, I have to play a pedophile AGAIN?”

It’s not enough that Mr. Hinds has played the Devil three times. No, he also has to play a pedophile three times! Life During Wartime I will allow, because the character seemed real. Even in Prime Suspect, Edward Parker-Jones was quite believable. But in this film, Carlos is simply a wolf in tailored clothing who bares his teeth at the end (sadly, that’s all he bares). To me, it would have been a better story if the plot had focused on the friendship between the two men and the dynamic between them and Carlos’ beautiful wife Deborah.

The gorgeous Nastassia Kinski as Deborah.

But instead, it’s a lone-cop movie and the only character we learn much about is Xavier Lombard himself. As Xavier, Daniel Auteuil is interesting to watch, and very French, with his aquiline nose, intense eyes and expressive face (I remember him as Ugolin from the Claude Berri masterpiece Jean de Florette.) Xavier Lombard is by no means your average cop, as we discover early in the film, when he brings home fresh flowers. He has a certain zest for life in spite of his depression and bitterness. 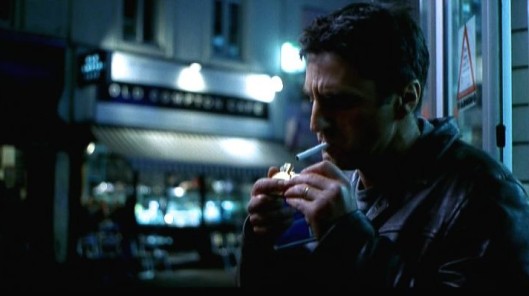 Another smoking scene. Don’t try this at home. It’s very, very bad for you.

When we first see Carlos Dimores, he’s meeting his old friend Xavier in a hotel. They used to work together on the police force in Paris, before things went bad for both of them. Xavier, who tragically lost his family, became a private investigator in London, while Carlos married into a wealthy family and began working for his father-in-law. Carlos explains to Xavier that he met his wife Deborah in Rio during Carnival (clearly she was in the mood, and the attraction was of the animal variety). We quickly figure out that Carlos is a bit of an opportunist. It’s fun watching Mr. H. play a sexy Latin lover/seducer. He has an accent, though I’m not sure whether he is supposed to be Spanish or Portuguese.

Carlos the Latin Lover? Or Carlos the Jackal? Bwahahaha! Ciarán Hinds has worked with a lot of of stunningly beautiful women. I really ought to write a post about that.

Now Deborah’s brother Leon has disappeared, and Carlos recommends his old friend Xavier for the job of tracking him down. It turns out that Leon stumbled on evidence of child sex trafficking, and decided to investigate, dooming himself in the process, but managing to save at least one child. 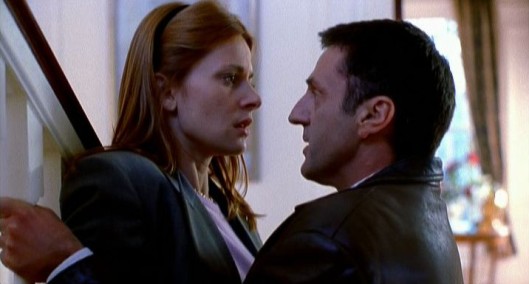 Xavier gets answers by pushing Deborah up against the banister with his body. It’s his special persuasive technique. Afterwards they share a cigarette. (Not.)

All the acting talent in this film is above the usual for cop thrillers. Auteuil is highly watchable. Nastassja Kinski as Deborah and especially Katrin Cartlidge as the world-weary Emily are excellent (and ravishingly beautiful). Emily is that cinematic cliché, the prostitute with a heart of gold. Though it is quite obvious to the viewer, it doesn’t seem to occur to Xavier that when he asks her to help him, he is putting her in grave danger. Her main function is to die so that she can provide another source of agonized regret for the tortured Xavier. Even so, Cartlidge is memorable.

Katrin Cartlidge. Like I said, she is lovely to look at.

As Nathalie, the girlfriend of Leon Spitz who takes in rescued children, Marianne Delcourt gives a nuanced, fierce performance that feels entirely real. There’s a connection between her and Xavier that goes deeper than looks.

The children themselves are heartbreaking. Make no mistake—in spite of the hackneyed plot, the scenes involving children are disturbing and haunting. The film takes a close look at the mechanics of child trafficking, whose kingpins are portrayed as chillingly efficient, amoral, and ruthless. 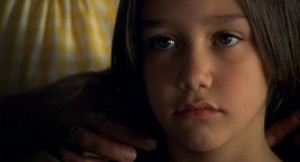 Menges uses this shadow-puppet version of “Sleeping Beauty” as a recurrent image to symbolize violated innocence. I think this may be a film from the 1920’s by German animator Lotte Reiniger.

The final confrontation where Carlos is unmasked as the murderous villain seems overwrought, though it is required in this kind of plot. Viewers like me who take pleasure in the sexiness of Carlos are suddenly forced into cognitive dissonance upon finding that he is a sicko pervert rather than a likable scoundrel with a smoldering appeal.

Fools! You thought I was Antonio Banderas, but in reality I am Snidely Whiplash! Bwaahaaahaa! 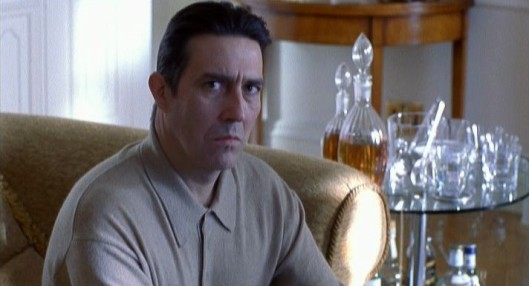 But I did enjoy this badass look.

What is it about Mr. H.’s physiognomy that causes casting directors to see him this way? I suppose there is something slightly harsh or unusual about his good looks that allows people to read in a cruel streak. Or perhaps it’s just that once a person plays a few villain roles, the die is cast? Now that he’s older, though, Hinds is being cast as wise benevolent father figures. He’s gone from playing the Devil to playing God.

In the upcoming movie “Last Days in the Desert” where he plays “the Father.”

In any case, this movie is a strange cross between a frivolous popcorn thriller and a more serious examination of a grievous social ill that plagues the (supposedly) civilized modern world. If you’re a Hinds or Auteuil fan, it’s a must.

An excellent 2011 review by Kevin Courrier