Robert Lovelace, the antihero in Richardson’s voluminous epistolary novel Clarissa (1748), is the Arch-Rake, the granddaddy of all the dissipated, black-hearted, handsome devils in romantic literature. He arrived on the scene even earlier than the famous Vicomte de Valmont in Choderlos de Laclos’ Les Liaisons Dangereuses (1782). BBC Four recently re-aired a four part radio version of Clarissa, starring Richard Armitage and Zoe Waites. (I’m publishing this a day early, as episode one is still available for another 12 hours, and the other episodes for a few more days.)

In spite of the title, the book and the show belong to Lovelace.

In the romance novels of today, the rake has been transformed into a dashing fellow with a checkered past who only requires the love of a good woman to be reformed into a model husband. The website All About Romance defines a rake as “a ladies’ man, a bon vivant and possibly a libertine.” Possibly? The authors of the eighteenth century, who observed rakes firsthand, knew better. Rakes were what today we might call sex addicts, but worse. They devoted themselves to gambling, drinking, and having sex with prostitutes. In their spare time, they seduced respectable ladies, then abandoned them to ruin. They were blots on society, destined either to die in duels with outraged husbands and brothers, or (having gambled away their fortunes) to perish miserably in garrets, riddled with syphilis. 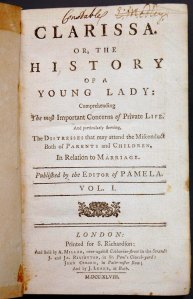 “Clarissa, or the History of a Young Lady: Comprehending the most Important Concerns of Private Life, and particularly showing the Distresses that may attend the Misconduct Both of Parents and Children in Relation to Marriage.”

“Rake” is short for “rakehell,” which the OED defines as “an immoral or dissolute person,” while the rake himself is “a fashionable or stylish man of dissolute or promiscuous habits.” In The Rake’s Progress, Hogarth’s series of eight paintings (1735), Tom Rakewell abandons his pregnant fiancée when he inherits his father’s fortune. He dresses himself to the nines, hires fencing and dancing masters, is arrested for debt, marries an older woman for her money, then gambles this second fortune away. He ends up as a madman in Bedlam.

At about 1500 pages and more than a million words, Clarissa is one of the longest novels ever written in English. It is also an epistolary novel, composed entirely in the form of letters between various characters. Therefore, to convert it into a four-episode play is quite a feat of distillation, performed in this case by playwright Hattie Naylor. Naylor is known for Bluebeard, a play about the fairytale murderer which, according to the Guardian, “raises the question that if we abhor sexual violence against women, why do we happily watch movies, read novels and share porn that promotes it? Are we colluding in our own oppression?”

An illustration from the 1795 edition of “Clarissa” by Elisabeth Chaillou. Click for source.

The Robert Lovelace of this adaptation, we are to understand, will not be turned into a romantic hero. The full horror of his actions will be revealed, just as Richardson intended. Lovelace abducts Clarissa, installs her in a brothel, and practices one cruel deception after another upon her, all in the name of wearing down her virtue. He is like the Roman villain Sextus Tarquinius, irresistibly drawn to the virtuous Lucretia. The purer the woman, the more driven he is to possess her. 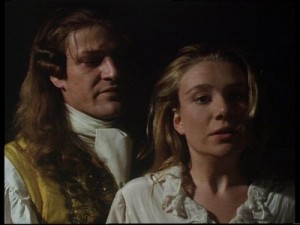 As for Clarissa herself, she is a woman trapped in horrific circumstances, a young person whose moral strength is far greater than her youth and innocence suggest. She is disadvantaged in innumerable ways by the society in which she lives, and by the family into which she is born (Clarissa’s idiotic mother is the literary forebear of Mrs. Bennett in Pride and Prejudice, while her sister and brother are unspeakably vicious and selfish, like Anne Elliott’s sister in Persuasion, but worse.) Naylor emphasizes Clarissa’s will to self-determination, her wish to lead her own life and make her own choices. The tragedy of Clarissa is that, in the end, every single choice is taken from her. 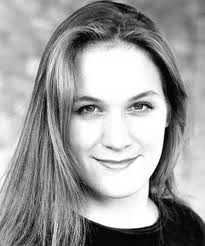 As Clarissa, Zoe Waites gives the heroine a maturity beyond her years, yet keeps her heartbreakingly vulnerable.

On the other hand, Naylor’s source material and the casting itself work against the goal of a truly gritty retelling. In spite of the virtuous message of the book, Richardson could not resist milking the titillating aspects of his story for all they were worth. Naylor retains a scene in which the threat of a fire forces Clarissa to open the door to Lovelace while she is partially dressed. The sight of her half-naked body drives him to distraction, and he nearly rapes her on the spot. Although Lovelace lacks the delicious wit of the Vicomte Valmont, he remains dangerously sexy, especially as voiced by the delectable Richard Armitage. As one fan of the novel wrote on Goodreads, “I fell for Lovelace even though he was a horrible character, but his wickedness was attractive in an odd sort of way.” And Clarissa’s impossibly virtuous nature works against her, for she is so inflexible and rigid in her integrity that we feel a tiny reflexive sympathy for Lovelace. The moral didacticism of the book sometimes works against Clarissa, just as Milton’s Satan is more interesting than his tedious God.

Sound clip: Lovelace’s deception revealed (Thanks to Barsine for the clips!)

Yet it is shocking to learn that not only readers, but (male) critics have characterized Clarissa as a puritan or a “neurotic prude” because she does not wish to be raped. Ellen Moody’s interesting essay on “Rape in Clarissa” suggests that Richardson was critiquing a rape-prone society which had a hearty appetite for sexual violence against women and “predatory and cruel behavior” in males, a society in which the vilest rapist could be the object of both male and female admiration. There is truth in this, for such attitudes persist today. But are our reactions to the characters simply a matter of deeply ingrained sexism? Lovelace is mentally unbalanced, veering wildly between cold-hearted calculation and delusional beliefs that Clarissa loves him or can be made to love him. He is in the grip of an erotic obsession, born of his own intolerable rejection at the hands of a woman he once loved. Richard Armitage’s nuanced performance underlines this need. Lovelace is good at faking emotion, and yet, we sense that real passion lurks just below the surface. Even in a horrific villain, this type of needful desire is not as repulsive to us as motivations like greed or envy.

On the other hand, I need hardly add that a female Lovelace (à la Glenn Close in Fatal Attraction) typically evokes fear and disgust rather than sympathy or attraction. Insatiable, overwhelming, aggressive desire can be tolerated or at least understood in a man, where it is consistent with his gender. In a woman, it makes us deeply uncomfortable.

As for Clarissa, her standards are so high that she has rejected five husbands before Lovelace even comes on the scene. No doubt that would have tried the patience of any eighteenth-century family, but it suggests to a modern reader that she simply does not wish to be married; she wants to be independent. Ironically, Clarissa is about to inherit a substantial fortune, and only awaits the arrival of her cousin, Colonel Morden, to settle the affairs before she becomes as much her own mistress as any Englishwoman can be in the eighteenth century. One tiny human weakness in Clarissa makes her more real to us. She feels an initial attraction (no doubt physical) to the handsome Lovelace and refuses to take sides with her family against him. This partiality causes her to hope, at first, that his libertinism can be redeemed, and to trust in his gentlemanly honor when he promises to assist her in escaping from a repugnant marriage. Once she gets Lovelace’s true measure, she realizes her error. But by then, it is far too late.

No, this simply won’t do. The BBC used photos from “North and South” to illustrate their audio version of “Clarissa.” I want to see Armitage in the full, glorious finery of an eighteenth century aristocrat. Including the wig. Away with this photo. He looks like a dyspeptic mill owner, not a rakish swordsman. 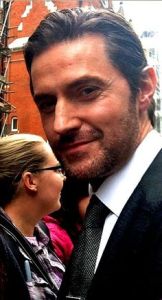 Ignore the photobomb, dress him in the right clothes, and there’s your Lovelace.

This production is cleverly adapted to maintain suspense. Initially, Lovelace is an ambiguous, even sympathetic and romantic figure. Like Clarissa, we have hopes for him, and we understand why she would entrust herself to him in order to escape a forced marriage to Solmes, a man she finds repulsive. In part two our hopes begin to fade but are not completely extinguished until the horrors of part three. To me, the final episode is the most interesting. After Clarissa is raped, Richardson permits her a scene of white-hot anger. She excoriates Lovelace and his female accomplices. She is no meek, passive martyr, but unforgiving, even to the maidservant Dorcas, the only person who showed kindness during her imprisonment. Indeed, Dorcas later hangs herself from shame and remorse (Lisa Hammond gives a touching performance in the role).

Sound clip: The last of Dorcas

Clarissa’s failure to show compassion and forgiveness to Dorcas is consistent with her character. She is inflexibly, almost inhumanly committed to her moral standards, yet she does not spare herself: she applies the same harsh judgment to her own behavior in disobeying her parents.

The final scenes are deeply satisfying. In spite of all that has happened, Clarissa triumphs in a way, because she stays true to herself. She escapes Lovelace and ends her days, if not free of fear, at least without having to lay eyes on him again. She also makes it clear that she will never marry him, a serious blow to Lovelace, who in spite of his dallying and temporizing certainly plans to wed her, if only to possess her more fully. This is very significant for the time, because as Lovelace and others point out, a man’s agreement to wed the woman he violates restores both their reputations. Clarissa’s final rejection therefore amounts to an insistence on her own right to self-determination: her sense of independent personhood is more precious to her than the opinion of society. It is a feminist stance. For his part, Lovelace jauntily keeps up the pretense of “Once a rake, always a rake,” but when he seeks out Colonel Morden for a duel, we understand that he finally acknowledges his own villainy and the need for justice to be done. Lovelace’s name is pronounced “Loveless,” perhaps a deliberate pun on his behavior, but also his fate. Richardson allows him to expiate his wickedness in death, thus restoring a measure of his romantic appeal (and setting the pattern for many a subsequent sexy villain, from the Vicomte de Valmont to Scott’s Bois Guilbert in Ivanhoe).

Both Clarissa and Lovelace, we feel, are true to themselves.

Sound clip: Once a rake, always a rake