The Voynich manuscript is written in a so-far indecipherable code. It has been described as an alchemical text, a herbal, an early example of an artificial language, a Cathar sacred book, a Medieval astronomical manual, a stage prop for a Renaissance play, a prediction of the end of the world, a description of technology belonging to aliens from the future, and last but not least, a several hundred years’ old hoax.

One of many images of naked Renaissance ladies in the Voynich manuscript. Source: Voynich Gallery.

After they were seated, M. Mazarin entered with an older, elegant but heavyset woman, whom he introduced as his mother, Mme. Mazarin. They sat in the chairs behind the library table.

“I’m sure you are all curious about why I asked you to assemble here this morning before we begin our paper sessions,” he said. “I want to show you something special. Something that has been in my family for many years.” He drew aside the brocade cloth, beneath which was a rectangular glass case containing a book stand. On the stand sat a slender volume opened to reveal two pages. Each contained an illustration surrounded by writing. Lynn, who was sitting close to the front, saw immediately that the pages looked exactly like pages from the Voynich manuscript. Gasps filled the room, and a cacophony of voices burst out.

“Please, please,” said M. Mazarin. “Attention, s’il vous plaît. This little binding contains the seven leaves missing from the Voynich manuscript. I am hosting this conference in part because I wish to select a scholar to analyze the pages and, in due course, publish his findings. At the conclusion of our meeting, I will announce my choice. He” —M. Mazarin looked about the room and nodded graciously toward Lynn and Alessandra— “or she alone will have access to these leaves. However, in order to convince you that they are genuine, I am allowing the group to examine the two pages on display.”

“Mazarin,” said Jean-Luc Durand, “I applaud your intent to secure the services of a qualified scholar to publish the manuscript, but would you not be more likely to contribute to Voynich studies by making scans of the pages available to everyone, as the Beinecke library has done with the greater part of the document?”

Mazarin looked displeased by the question. “I have no stomach to see my family’s property displayed openly on the web,” he said coldly. “And in order to reduce the chance of intrusive and perhaps… overly enthusiastic visitors to my home, I would appreciate your discretion. Naturally I understand that the appearance of a document such as this will draw attention, but I do not wish to speak to the media, nor to permit anyone to view the manuscript other than yourselves. After we break for the paper sessions, it will be returned to my safe. But you are free to approach and examine it, to satisfy yourselves of its authenticity.”

Mazarin gave a Gallic shrug. “Perhaps not, but that is all I am prepared to permit.” People were already lining up to view the pages, and Lynn rose to join the queue. While waiting her turn, she exchanged smiles with Mme. Mazarin, and her eyes fell on the unusual gold necklace the woman was wearing. It was composed of a series of one-inch gold rings, each ornamented with a design in filigree, but the ring that rested between her clavicles was larger than the others, and within it was mounted a gold key identical to the one Lynn had taken from West.

“That’s a beautiful necklace,” she told the woman. Mme. Mazarin smiled, placing a hand on her chest. “Merci.” She seemed about to say more, but M. Mazarin touched her hand and caught her eye, slightly shaking his head. His mother subsided, and contented herself with nodding to Lynn as she finally reached the glass case. Each of the panes of glass that formed the case had a gold metallic edging, and the door was held shut by a rather elaborate, tumbler-style lock that was also gold-plated. Bending over to examine the manuscript, Lynn found her attention focused on the lock and its circular keyhole. Madame’s necklace must hold the key! Which could only mean that the object West possessed, and had been so anxious to recover, was a duplicate key. Lynn forced herself to look at the Voynich pages, which appeared genuine enough to her eyes, but she couldn’t help glancing back at the lock several times before the clearing of throats behind her, and a glare from M. Mazarin, caused her to move past the case and back to her seat.

Lynn’s paper was the first in her session that morning. She showed images of paintings combining text with repetitive, sometimes sexual imagery by visionary folk artists like Howard Finster and William Thomas Thompson, and discussed the established relationship between psychosis and creativity. Adolf Wölfli, a Swiss mental patient in the early twentieth century, had written an epic quasi-autobiography that combined fact with fantasy. Was it not possible that the Voynich manuscript had been created by someone to illustrate an inner world? The repetitive representations of nude female figures encapsulated in or emerging from tubes seemed to point toward this type of explanation, as well as the fact that none of the plants in the “herbal” could be identified. Additionally, paranoia could provide a motive for the use of the cipher, which might be necessary in the mind of the author to prevent his persecutors from gaining access to the document. Pausing for a moment to assess the reaction, she was unsurprised to see a number of displeased expressions. Voynich enthusiasts were not partial to explanations like this. Most of them hoped that the document contained a contribution to alchemical or mystical learning, or perhaps the observations of a Renaissance spy, hidden within a distracting array of misleading illustrations.

“I’d like to make clear that if my view is correct, this does not mean the manuscript is indecipherable gibberish,” she stressed. “Whoever created it was surely well-educated and highly intelligent, traits that are by no means incompatible with mental illness. I am hopeful that one day, we will be able to read the text and learn more about the visionary, compelling work of this unknown genius.”

As she expected, West got to his feet. She noticed a few others in the audience nodding to each other, as if anticipating the fireworks. “Professor Melton, you’ve failed to take account of a very well-established fact about the Voynich manuscript. It contains two distinct dialects that correlate to two handwritings. It cannot be the work of one individual, and therefore your theory is invalid. Madmen work alone.”

She gave him a smile. “I may have to concede that last point, Mr. West. Recent experience confirms it.” He tightened his lips and glared at her as she continued, “I’m not unaware of the issue of the two handwritings, but it seems to me that this effect could have been planned by the author as part of his imaginative creation. So could the two dialects or languages.” West looked unconvinced, but others were raising their hands, and there was some further discussion about whether the language disorders characteristic of psychosis were compatible with Voynichese.

Next Willem Van Leeuwen, a relatively new member of the study group, rose to give a paper on his theory that the Voynich document was connected to the circle of Francis Bacon, the English scientist and philosopher. Bacon was regarded as the father of empiricism, and (by some at least) as the real author of William Shakespeare’s plays. Lynn was skeptical at first, wondering if Van Leeuwen belonged to the “Bacon as Bard” crowd of conspiracy theorists, but his paper turned out to be fascinating. He showed the Voynich manuscript’s illustrations of connected, colored tubes, and compared them to pictures of the earliest microscopes. The resemblance was astonishing. Many of the plant images and circular diagrams in the manuscript could be explained as rather precise drawings of microscopic diatoms and plants. Van Leeuwen explained his theory that the Voynich manuscript was based on Bacon’s utopian novel, The New Atlantis, which dealt with life on a mystical island in the Atlantic, and even described healing techniques involving communal bathing in gender-segregated pools. Furthermore, Bacon and his circle were known to be interested in ciphers and secret codes.

When Van Leeuwen finished, there was enthusiastic applause, and West again rose to comment. “I too favor the theory that the author or authors of the document were men of science,” he said, “and your presentation would be quite convincing except for the elephant in the room— the carbon date evidence from 2009 that places the vellum of the manuscript between 1404 and 1438 with a 95% level of confidence. This means the document predates Bacon by a century. What’s your response to that?”

Van Leeuwen smiled. “I don’t have an answer. The first microscopes were invented in 1595, so far as we know, by one of my countrymen. To me, the evidence that the Voynich author or authors possessed a microscope is just as compelling as the carbon date evidence, which awaits duplication by another lab. There is also the possibility that the author or authors used vellum that was already very old at the time of composition.”

The lively discussion continued, with West alluding to his own theory that the manuscript was written in Renaissance Italy and formed part of a tradition of fantastic, alchemical herbals produced during that time. His paper on the topic was to be presented the following day, and Lynn was looking forward to it. She would ask for a detailed explanation of exactly how the Voynich author’s repetitive images of naked women were consistent with a scientific herbal.

Notes: After researching the theories about the manuscript, I tend to agree with Lynn that it is the product of a highly intelligent person who was also paranoid and psychotic. But I like the microscope theory too. The most consistently interesting Voynich theorist is Richard Santa Colonna, who suggested the Francis Bacon New Atlantis theory as well as the microscope theory. These days he leans toward the view that the manuscript is a hoax, perhaps perpetrated by Voynich himself.

Nobody has really been able to account for the naked ladies. 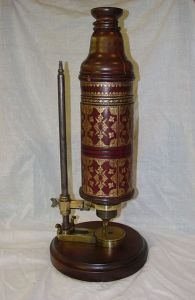 One of many microscope-like images in the Voynich manuscript.

11 thoughts on “The Voynich Affair: Chapter 7”