So Tigger came closer, and leaned over the back of Roo’s chair, and suddenly he put out his tongue and took one large golollop, and with a sudden jump of surprise Kanga said “Oh!” and then clutched at the spoon again just as it was disappearing, and pulled it safely back out of Tigger’s mouth. But the Extract of Malt had gone.

Then Tigger looked up at the ceiling, and closed his eyes, and his tongue went round and round his chops, in case he had left any outside, and a peaceful smile came over his face as he said, “So that’s what Tiggers like!”

Which explains why he always lived at Kanga’s house afterwards, and had Extract of Malt for breakfast, dinner and tea.

-A. A. Milne, The House at Pooh Corner

Some people dislike the flavor of malt, and younger people usually have no idea what it is. I’ve always loved it. Malt is the sweet version of umami, the “fifth flavor” that makes savory, salty things taste so good. 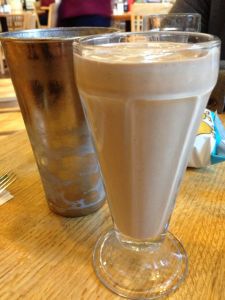 The malted at Tommy’s on Coventry Street in Cleveland, Ohio, where they still know how to make it.

Malt is created by allowing a grain (usually barley) to sprout, then drying it in a kiln. The malting process creates enzymes that turn the starches in the grain to sugars, and it produces a characteristic, earthy flavor. There would be neither beer nor whiskey without the magic addition of malt.

In the early twentieth century, malt was universally extolled as a nutritional supplement. Children were given malt extract (Tigger’s favorite), and malted milk powder was added to all sorts of foods. Intrepid explorers took crates of malted milk to the Arctic. 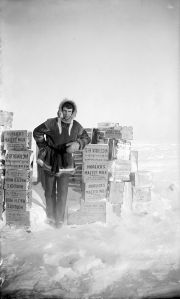 Today, all we have left in the US is malted milk balls (usually better in theory than in practice), the drink Ovaltine, and the classic chocolate malted. In the UK there is a “malt biscuit,” a cookie made with malted milk powder. That is something I’d like to try.

I’m not crazy about Whoppers because of the low quality, but I enjoy “artisanal” malted milk balls.

I don’t keep malted milk powder around, because I like to work through it slowly. But I have a Tigger in the house who would eat it for breakfast, dinner, tea and those other, secret meals that take place while I am sleeping or reading, or writing blog posts…