I have written before about my interest in talismans, shrines, and amulets, especially when they occur in miniature or jewelry form. After seeing Guylty’s fabulous Richard Armitage shrines, which are made from tiny candy tins, I decided to test the idea on a different type of amulet, the Latin American package amulet.

This type of amulet often blends indigenous and European (Catholic) concepts and images. You can get them inexpensively from the Lucky Mojo Curio company, which has interesting web pages on the varieties to be found in Peru, Guatemala, and Mexico. The kind I used is the saint wallet, which looks like a tiny vinyl wallet edged with a blanket stitch in colorful thread. Here is an example.

The wallets are packed with significant imagery and words. There are small pictures of devotional subjects: saints, the Virgin Mary, the Sacred Heart, and so forth. A minuscule Miraculous Medal is attached with seed beads. Stapled to the wallet is a piece of a “genuine” novena prayer wrapped in yellow cellophane. Because the amulet is in the form of a money wallet, it may be intended to bring wealth and good fortune to its possessor. Of course, it also serves as a pocket shrine for Catholic devotions.

Here’s what the amulet looks like when it’s folded:

Complete with “Made In Mexico” sticker!

As a gift for my wonderful friend Guylty, I transformed one of these little wallets into a Richard Armitage amulet, incorporating traditional magical motifs. Eyes are significant in magic all over the world, so I included a photograph of his eyes in place of one of the saint cards. There is a fun anagram of the name ARMITAGE, and instead of the novena, I used text from his recent role as John Proctor in “The Crucible.” I left the Miraculous Medal, because what fangirl doesn’t need a miracle once in a while? 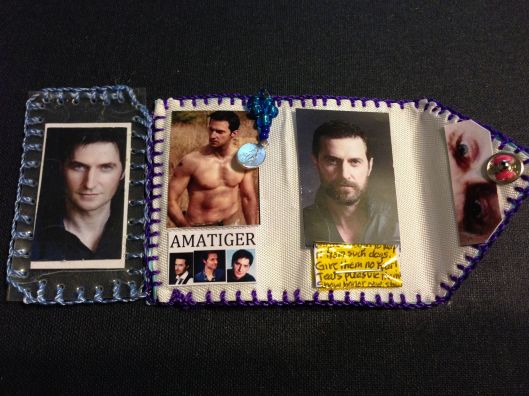 I also considered GET A ARMI, but in the end, I really had to go with AM A TIGER. 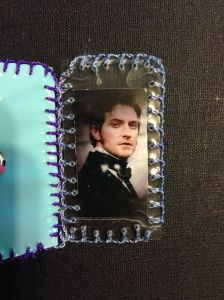 The other side of the clear vinyl flap.

I’m sure you can guess the subject of my next effort. Unfortunately, I botched the delicate operation of inserting a photo into the clear vinyl section, so I had to remove it. Instead, I added a bit of silver chain to which a photo is attached using a magnet clasp. The “novena” text this time is from W. B. Yeat’s poem Aedh Wishes For The Cloths of Heaven. One of the pictures is a poster from Mr. H.’s current play at the Abbey Theatre in Dublin, Our Few And Evil Days. And what a play it is. I will write about it soon!

There is no anagram, because the name Ciarán Hinds makes unbelievably bad anagrams! After several attempts to figure out something suitable, I finally used an online program (who knew they had such things?) which offered such gems as the following:

Arachnid Sin: Speaks for itself, but as an aside, I really, really hate spiders!
Acid Rash Inn: Sounds worse than the Bates Motel.
Rancid Ah Sin: Not even going to comment.
Cash Drain In: Hmm, maybe at least that’s good mojo!
Irish And Can: This one has distinct possibilities.
A Chard In Sin: I know he is fond of kale, but geez!
A Narc Hid Sin: Sounds like a film noir. His next role? Can’t help but notice how the word “sin” keeps recurring… 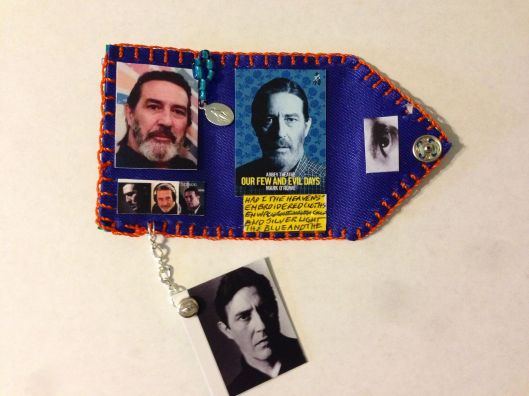 Still, I am pleased to report that the final result is pure MAGIC!

My other talisman posts: