Our Sammy is quite the feline thespian. And like all divas, he craves international exposure. When I explained to him that there was some pretty serious competition out there on the web (GrumpyCat for starters), he only said, “Fasten your seat belts. It’s going to be a bumpy night.”

This was his debut role, as a baguette. 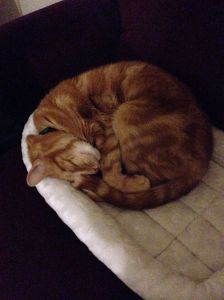 He considers the boule to be his masterpiece, but he also does a mean cinnamon roll.

Sammy despises costumes of any sort, and will only perform in the nude. He does consent to wear a fetching green collar, but only because green is his color.

Even though we are vegetarians, Sammy is an enthusiastic carnivore, and when he has too much to drink at parties, he insists on doing his lamb chop imitation.

Somehow he convinced us to have a professional do a few head shots for his portfolio.

That led to this audition for a remake of “Day of the Triffid.”

I tried one last time to convey to Sammy the sad truth that if he wants to be a big internet star, he’ll have to spend less time snoozing and more time working on his piano playing. He looked at me like I was nuts. “I already AM a big star. It’s the search engines that are too small.” 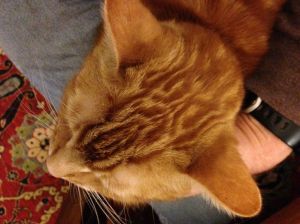 Sammy often portrays a superfeline who can shoot flames from his head and travel at supersonic speeds!

He has a bad habit of stalking and taking down any nearby felines if they aren’t feisty enough to defend themselves. Did I mention he’s a diva?

17 thoughts on “I’m Ready For My Closeup Now, Mr. DeMille”