You might very well think that I’m only posting about the Allman Brothers so I can show this cool naked photo of them that I found online. But as a matter of fact, I have a little story to tell.

A 1969 promotional postcard for the band. This dates back to their Macon days. Uploaded by Jack Weston to allmanbrothersband.com. Click for source (you definitely want to enlarge this one).

I spent my undergraduate years in Macon, GA, bemused by the beauty of the town that Sherman forgot, with its intact antebellum mansions and abundant cherry blossoms. The town’s pleasures were offset by the stark poverty and racial division I saw there, persistent legacies of the Civil War. The small women’s college I attended had long abandoned sororities in favor of a more “egalitarian” system of rotating class names, among which the “Tri-K Pirates” had taken their title from the Ku Klux Klan. At the larger university across town, one could witness an annual event at which male students in Confederate uniform galloped horses across campus, while women flounced around in Scarlett O’Hara hoop skirts.

Southern culture was of limited interest to me back then, especially as it seemed to consist mainly of flags, guns, fried foods, sickeningly sweet iced tea, insincerity, and overcooked greens. I’d had enough of rednecks growing up in Central Florida, where the culture was more cosmopolitan on the coasts, but full of drawling alligator poachers the minute you entered the hinterlands.

When I moved to the Midwest for graduate school, I divested myself of my accent as quickly as possible, but retained a taste for biscuits with gravy, hush puppies, and pecan pie. I left my single Lynyrd Skynyrd album behind, and I scarcely had an inkling of the sacred ground on which I had been walking. Musically speaking, that is. I didn’t even know that Beautiful Man Otis Redding had grown up in Macon. I later learned with a shock that Otis had ended his life when his plane crashed into Monona Lake in Madison, WI–my next destination after Macon.

Otis Redding in 1967, the year he died. Click for source (wikipedia).

Once in Madison, I met the man who was to become the Long-Suffering Husband. As it turned out, he was (and is) fond of the Allman Brothers Band. Thus it was that I learned of their connection to Macon and came to appreciate their music. At the time, the only thing I knew about Gregg Allman was that he’d been married to Cher.

Cher and Gregg Allman in 1977 at Rona Barrett’s house in Los Angeles. Photo by Michael Ochs. Click for source (rolexblog.blogspot.com).

To me, the most interesting band members are Duane Allman and Dickey Betts, because of their musical skills. I also happen to think they’re the best looking. In January 1969, while living in Macon, Duane wrote the following New Year’s resolution:

This year I will be more thoughtful of my fellow man, exert more effort in each of my endeavors professionally as well as personally, take love where I find it, and offer it to everyone who will take it. In this coming year I will seek knowledge from those wiser than me, and try to teach those who wish to learn from me. I love being alive and I will be the best man I possibly can.

He died less than three years later, at the age of 24. 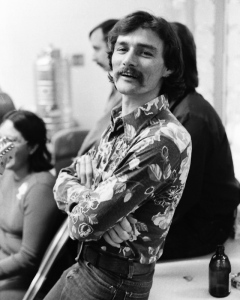 Dickey Betts, the composer and voice of “Ramblin’ Man.” Click for source (thebighousemuseum.com).

I spent two of my undergraduate years in Macon on College Street, living across the street from grand antebellum houses. One was the 1842 Inn, a boutique hotel, and the other was Beall’s, a surf and turf restaurant that served up the best pie I’ve ever tasted (walnut chocolate-chip, warm with vanilla ice cream and garnished with crème de cacao). I worked at Beall’s as a waitress one sweltering summer, coming away each night with swollen, aching feet and good tips.

Beall’s 1860 Inn in Macon. It was a restaurant in the 70’s and 80’s and now belongs to the Engineering School of Mercer University. Click for source.

And now we come to the final irony. All that time I was living on College Street, utterly ignorant of the ghostly presence of Duane Allman, Berry Oakley and the rest of the band, I was literally walking in their footsteps. In 1969, the band released its first album, The Allman Brothers Band. Though critically well-received, it didn’t sell well. However, it spawned a cult following. It included a song, “Whipping Post,” that was to gain fame as side four of the band’s breakthrough live album At Fillmore East.

The cover of their debut shows the band standing on the front porch of the dilapidated Beall mansion. They lived in the house next door. 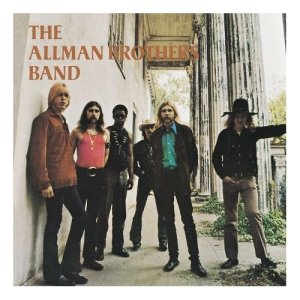 The Allman Brothers at the Beall mansion in 1969.

2 thoughts on “Eat A Peach”