Much to my delight, I recently discovered that Gene Kelly’s amazing, muscular rear end still thrills legions of fans. It has a well-deserved tumblr page of its own. Once you start looking, you find that the internet is full of joyous paeans of praise for the spectacular Kelly glutei (along with the occasional mean-spirited suggestion that he used padding). 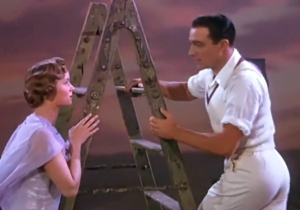 All I Do Is Dream Of You: with Debbie Reynolds in “Singin’ In The Rain.” Click for source (an amazing tumblr site rather indecorously entitled genekellysbutt).

Kelly was an Irish-American boy from Pittsburgh (and a Steelers fan) who made it his goal to demonstrate that male dancing could be athletic, robust, and masculine. He abandoned a planned career in law to start a dance studio, and got his big break leading the original cast of Pal Joey on Broadway. 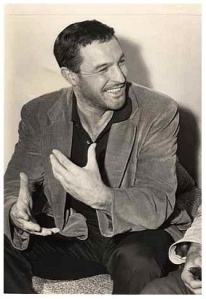 As choreographer, dancer and director, he revolutionized the way dance was shown on film, attempting to convey the three-dimensionality of dance by using camera movement, lighting, color, and special effects like double exposure. 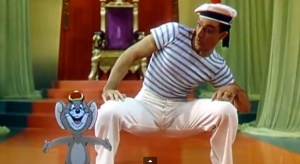 Gene dances with Jerry the Mouse in “Anchors Aweigh.” Screencap by Linnet. Click the image for the Youtube video.

Physically speaking, Kelly was rather diminutive, only 5’7″, but he always seemed larger-than-life. Instead of Fred Astaire’s perfectly tailored suits, shirts and tails, he wore sailor’s suits, “everyman” trousers and tight T-shirts (often with short sleeves) that emphasized his broad shoulders and muscular physique. 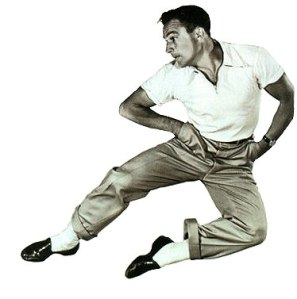 An insouciant dance with hands in pockets. Hmmm… Click for source (smirk.com)

He looked, simultaneously, like a matinée idol and the handsome fellow next door. Always, he projected an aura of decency, kindness and joie de vivre — the latter quality never more fully expressed than in the exuberant title scene of Singin’ In The Rain.

Gene Kelly’s style of dance was unashamedly, zestfully sexy, a celebration of the expressive potential of the fit male body. Although he was not as accomplished a singer as Astaire, he too made the most of his instrument. His singing was more gentle than his dancing–sweet, charming and unaffected. 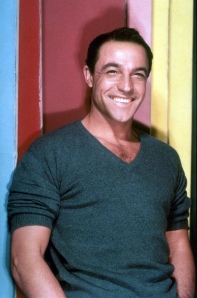 A glorious hunk of beefcake with a killer smile. Click for source (doctormacro.com)

By all accounts, Kelly was a man of conviction who stood up for what he believed in. With a group of other Hollywood stars, he flew to Washington to protest McCarthyism. He also had strong views on the Irish Troubles, and gave substantial amounts of money to the IRA and NORAID. A lifelong Democrat and union supporter, he eventually gave up his Roman Catholicism in favor of agnosticism. All this… and an outrageous serving of sex appeal. Get a load of Kelly in The Pirate, a film that is most remembered today for this outfit: 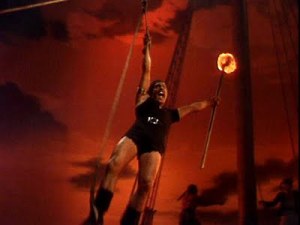 Gene Kelly died on Feb. 2, 1996, eighteen years ago. Beautiful Man, I miss you! Thank you for your smile and your enduring Talent. 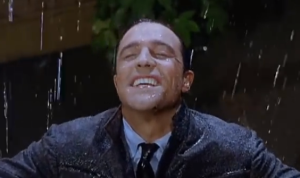 For an excellent article about the Nachleben of Kelly’s rear end (and other juicy bits) on the internet, click here. And for one of the most beautiful and sexiest pieces of fan art I’ve ever seen, click here.