Nothing else for me to say
And so I’ll close, but by the way
Everybody’s thinking of you
P.S. I love you

The second week of January brought sadness to our household. We lost one of our four cats, who goes in my fiction by the name Absinthe. Now, grief puts one in a strange, dazed state of mind. I was good for nothing in the way of paid work that afternoon, so I decided to undertake a kitchen task that had already been planned: pickling some vegetables. Being in the kitchen at such moments provides multiple benefits. Working with food is therapeutic, and simple enough to manage even if you feel poleaxed. And it caters to that need to comfort and nurture oneself and others with something edible.

A few days before, the Long-Suffering Husband had come home with a bag of turnips and a bag of brussels sprouts, as well as a case of Ball pint jars and lids. He expressed his intention to make pickles, but from that point, things slowed down a bit. It became apparent that he needed a… pickle facilitator. Or, rather, a facilitatrix. (Sounds a bit kinky, doesn’t it?)

I decided to use David Lebowitz’ recipe for the pickled turnips, in spite of (or possibly because of?) the fact that he includes no careful warnings about sterilizing the jars, and daringly advises one to let the jars sit out at room temperature for a week before putting them in the fridge. In spite of being a vegetarian, I have seldom eaten turnips. Somehow I had classed them in the same category as parsnips and collards as “veggies I tried once and hated.” But after tasting pickled turnips on an incredible falafel pita in the Marais, one happy January gone by, I decided that I had it all wrong. Turnips Are Delicious. In a radishy, tangy sort of way. Especially when pickled.

As I packed the turnip batons into their jars (studded with a few slices of beet that turned the brine a beautiful amethyst color), I grew despondent. When we opened them after the requisite waiting period, we would think about the day Absinthe died, and all our pleasure would be spoiled. I was, in fact, making Death Pickles.

Turnips in jars on Day 1, ready to begin their journey to pickledom. I included beet slices and plenty of garlic.

But I was halfway through the job, and had already prepared the white wine vinegar brine for the brussels sprouts. For these, I chose the “Hip Girls” recipe. Their more cautious approach advises full processing in a water bath, but says you can do refrigerator pickles if you want.

Yesterday was the one-week mark, so I made falafel just for the turnip pickles and we opened up the first jar. They were a little salty, but tasted just right nestled in the pita with all the other goodies. 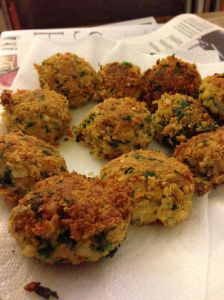 I thought about Absinthe and the way she loved to be underfoot in the kitchen. She had a favorite spot on the floor just beneath the kitchen sink, by the heat register.

Yes, every time we open up a jar of these, we will think of her. And I’m OK with that. Next week: Brussels sprouts…