When it comes to fandom, I am monolatrous. But I admit to having a tiny crush on Mark Rylance after seeing him perform Twelfth Night and Richard III (in rep at the Belasco Theater in New York).

Rylance is, according to many, our greatest living stage actor. If Twelfth Night is any indication, he seems to be closing in on the title of greatest stage actress as well.

Rylance (as Olivia in “Twelfth Night”), Click for source (thestage.co.uk)

This is all the more amazing given that at first glance, he seems unimpressive. He lacks the stunning good looks of an Olivier (or even the florid handsomeness of Branagh), and his voice is not one of those booming, rich Shakepeare voices.

At a slender 5′ 8, Rylance seems physically too slight to play the self-mythologizing, axe-wielding, wife-beater-clad wastrel Rooster Byron in Jez Butterworth’s Jerusalem, yet… this picture says it all.

On further viewing, and especially in person, he manifests an uncanny personal charm. His seemingly average, pleasant features are mobile, chameleon-like, and the more you look at his face, the more you see. His voice is remarkably versatile, an instrument over which he has full control. Most of all, he has impeccable timing, and a sense of perfect comfort before an audience that reveals his confidence as a performer.

He has the sweetest of smiles. Click for source: broadwayworld.com

I became aware of Rylance only recently, when I watched a program called Shakespeare in Italy (a topic worthy of a separate post). Puckish host Francesco da Mosta briefly interviews Rylance on the political situation at the end of Elizabeth I’s reign. Had da Mosta not pointed out in his intro to the sequence that Rylance was a highly lauded actor, I would have taken him for a mild-mannered (but unaccountably hip) academic.

With Francesco in Rome. Screencap by Linnet.

In fact, Rylance ruffled some scholarly feathers when, during his decade-long tenure as artistic director of the Globe Theater, he questioned Shakespeare’s authorship of the canon. Notably, Francesco didn’t ask him about that. Still, Rylance almost always wears a small ring in his left ear, just like you-know-who.

He and his eventual wife Claire Van Kampen mortgaged their flat to found a theater company, Phoebus’ Cart, which performed The Tempest along ley lines in England. Among his carefully-chosen film roles are Ferdinand in Peter Greenaway’s lush, bizarre Prospero’s Books, and Jay in Intimacy, the only English-language film by French director Patrice Chéreau, which includes scenes of non-simulated sex. 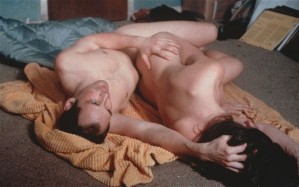 Rylance and Kerry Fox in “Intimacy” (2001) Click for source (guardian.co.uk)

Currently, he’s starring as Henry VIII’s minister Thomas Cromwell in the BBC adaptation of Hilary Mantel’s Man Booker prize-winning novels Wolf Hall and Bring Up the Bodies, a role that seems tailor-made for his talents and expertise. It’s set to air in 2015.

The two Globe productions in New York have just recouped a 3.1 million dollar investment. Not bad for Shakespeare. 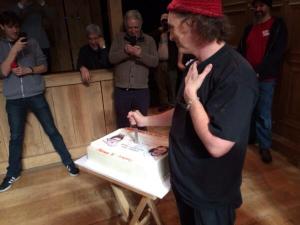 “My kingdom for a fork!” Rylance stabs the Shakespeare on Broadway cake celebrating “recoupment.” Click for source (Stephen Fry on Twitter)

These shows are the next-best thing to time travel. The audience is urged to arrive twenty minutes early in order to watch the actors warming up and being laced, hooked and buttoned into their elaborate, authentic-down-to-the-undies costumes, as a group of musicians in early seventeenth-century dress plays authentic instruments (who knew they had trombones back then?). This ritual may not have been performed in Shakespeare’s day, but it allows audiences to see that the costumes are real. You can almost feel the weight of the velvet, and the stiffness of the starched lace.

As we watched avidly from the fourth row, Rylance glanced down at the Long-Suffering Husband and me. He made eye contact and smiled so sweetly that it melted both our hearts! I think he was already in character as Olivia. Before Richard III, he similarly exchanged grins and jokes with the audience (including those in the stalls set directly on the stage). This seems to be a strategy to make the room smaller, and literally sets the stage for the complicity with the audience that was characteristic of both productions. Soon, the two front chandeliers were lowered, to have their real candles lighted as a signal that the show was about to begin. Throughout both plays, wax dripped onto the stage floor.

I have little to add to the praise that has been heaped on the entire cast of both shows, except that I’ve never before seen a Shakespearean comedy presented with such joy. When Stephen Fry’s self-important steward Malvolio quotes from what he believes is Olivia’s love-letter, this is what ensues:

Malvolio thrusts his greatness upon the unsuspecting Olivia… Click for source (the guardian.com)

Rylance’s Richard is a finely nuanced portrait of a maniacally ambitious man who masquerades as a comic. At first he seems a willing clown, mugging and enjoying the laughs from the audience, who gladly become his conspirators. 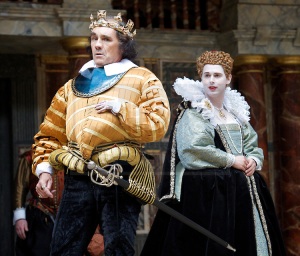 Rylance as Richard III, with the beautiful Samuel Barnett as Queen Elizabeth

But the more power Richard amasses, and the more murders he racks up, the more his good humor fades, and the more Rylance reveals Richard’s true nature as what we would today call a sociopath– a person utterly lacking in human empathy. The only people he cannot fool are Elizabeth (his predecessor’s queen), and his own mother, who curses him to destruction.

Both plays end with what I took to be another authentic practice: the entire cast performs a dance. This was one of the highlights! 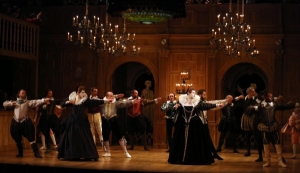 The stately opening night dance after Richard III. Note the real candles in the chandeliers. Source: Broadwayworld.com. Click to enlarge.

Some are born great. Beautiful Man Mark Rylance: I suspect you were born with a Muse of Fire…

2 thoughts on “Some Have Greatness Thrust Upon Them”