He was something of an enfant terrible in the New York food scene, having absorbed all the tenets of traditional haute cuisine and then rejected them in favor of his own funky aesthetic, which blended Korean food and American popular culture. While still a teenager in the nineties, he’d gotten his start in California by creating and selling a Korean version of that meat lover’s barbecue icon, the Bacon Explosion, in which he substituted crispy pork skin, ground pork shoulder and woven strips of pork belly for the conventional Italian sausage and bacon. The resulting slow-smoked fat bomb, he boasted, exceeded even the 5,000 calories of the popular original. Now he ran a noodle joint in Manhattan, which was much lauded for its lip-smacking ramen and luscious pork buns. The imminent debut of his more upscale restaurant, Momotaro, was creating a major buzz among foodies. The menu on Momotaro’s website specifically noted that vegetarians would not be accommodated.

One of my books contains this affectionate satire of celebrity chef and Beautiful Man David Chang, the mastermind behind Momofuku Noodle and its offspring, Momofuku Ko, Momofuku Ssäm Bar, Má Pêche and Momofuku Milk Bar. To give you an idea of his current hipness quotient, Wikipedia reports that “the highly limited seating [at his tiny prix fixe boîte Momofuku Ko], along with Chang’s popularity in New York, has caused a furor, generating frustration for both influential and ordinary people who have failed to secure a reservation.” 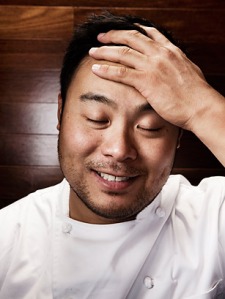 He’s a bit on the chunky side (perhaps porky is the right word?) but I must say that David Chang is irresistibly cute. Click for source (time.com)

Chang is now a recognizable face thanks to the PBS series The Mind of a Chef, Season 1 of which follows his culinary adventures. I was thrilled with the first episode, where he advises food writer Peter Meehan to “crush” a monster bowl of tsukemen (then takes over the job when Meehan can barely make a dent in the massive pile of noodles). In this episode he cheerfully cooks two classic vegetarian dishes, cacio e pepe and gnocchi–both made with instant ramen. Episode Two, however, is entitled, simply, “Pig.” 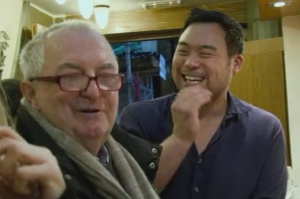 It has to be admitted that Chang has a very pinchable pair of dimpled cheeks… He is also the co-creater of Lucky Peach, a food magazine with a characteristic bad-boy vibe (In spite of efforts to add more gender variety, it remains very testosterone-driven, as does the world of haute and hip cuisine in general.)

Therefore I was delighted to have a chance (at last) to sample some actual Changfare during our visit to New York. Most of his menus are distinctly un-vegetarian friendly. Momofuku Ko (where you eat what you’re served and pay $175 per person for the privilege) was sadly out of the question, not because I refuse to pay that amount for a meal, but because it’s a total flesh-fest. Still, there was Chang’s noodle joint, which offers a vegetarian Ginger Scallion Bowl.

Thus it was that we arrived at Momofuku Noodle for lunch on New Year’s Eve, where a sizable line had already formed. When the door opened promptly at noon, the crowd filed in and systematically filled every seat at the tables and bar. We managed to squeeze into one of the last tables, while the disappointed would-be noodle-slurpers outside had to wait for the second seating.

The server helpfully informed us that neither of the two side dishes we had planned to order, Nugget Potatoes with sage, beets and yogurt, and Brussels Sprouts with coconut, peanuts and Thai basil, were vegetarian (no doubt they are fried in pork fat). Instead he offered us the Shiitake Mushroom Bun, and a salad with pears and Humboldt blue cheese. To these suggestions we gratefully assented.

The salad was pleasing enough, with a mix of extremely fresh greens, raw pears, and red cubes of pear poached in a sweet, spicy liquid. The raw pears were a bit unripe and crunchy, which was unfortunate but forgivable. This is the kind of salad one might find in any competent upscale restaurant, though I thought the spicy pears were unusually tasty and holiday-appropriate. (Looking at the menu, I see that this salad normally includes Benton’s country ham, a completely unnecessary addition.) 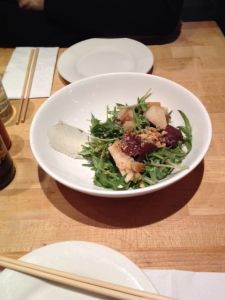 Humbolt blue cheese (schmeared on the side) and pear salad at Momofuku Noodle. Photo by Linnet.

Next up, steamed buns topped with grilled shiitake mushrooms and an utterly delicious, sweet and savory sauce (a variety of hoisin?). These buns were truly to die for, though as I was finishing the last morsel and smacking my lips, I noticed a suspiciously bacon-like crunch. The server, however, had offered this as a vegetarian item, so maybe it was just a crispy bit of mushroom. To tell the truth, I don’t think restaurants like this are particularly worried if a bit of animal product creeps in to an ostensibly meat-free dish… But this is an item I’d love to attempt at home. 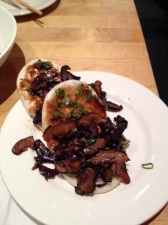 At last, the fabled Momofuku noodles arrived. The dish was described as noodles (not ramen) with pickled shiitakes, cucumber and cabbage. It was garnished with a square of salty nori, and a bottle of hot sauce was provided for our delectation. The noodles were curly and ramen-y, tossed with a rather too-liberal amount of oil. The entire dish was surprisingly bland, with scarcely any ginger flavor, though tasty enough and pleasing to the eye. 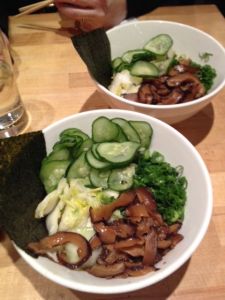 Ginger Scallion noodles at Momofuku, waiting to be devoured. 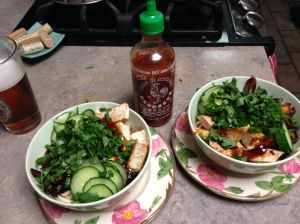 We finished off our bowls with no trouble whatsoever, and ordered for good measure a serving of the Cap’n Crunch Cake Truffles, which we greedily ate before I could take a picture. Luckily, yelp.com supplies a photo of exactly what we were served. These are a good example of the type of pop culture-inspired, ultra decadent pastries served at the Momofuku Milk Bar and created by Chang’s pastry chef, Christina Tosi (who also makes a dessert called Crack Pie). The truffles tasted like cake made with Cap’n Crunch cereal that had been reduced to crumbs, mixed with powdered milk, moistened, and rolled into dense balls with a slightly crunchy, milky coating. Very sweet and rich, but great fun for adults with Cap’n Crunch nostalgia. Which raises the question: where are the Peanut Butter Cereal and Crunchberry truffles? 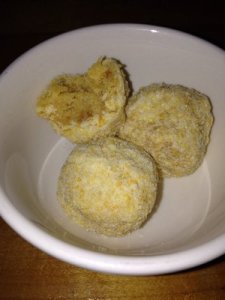 The verdict? Good food and great fun. And now I can avow from my own experience that Dave Chang has utterly delectable buns.

Related Articles: I like this one: Reasonable Consumer Would Know Crunchberries Not Real, Rules Judge