December 12, 2013. The premiere of The Night Alive’s New York run at the Atlantic Theater. It is 8:58 pm and I wait impatiently at the computer for the 9:00pm live stream of the after party, with “red carpet interviews.”

The clock ticks down. It is 9:00pm, but nothing happens. Frantically I click on various parts of the screen as though to wake it up. Finally I refresh. Now the little timer onscreen says 9:30-10:00pm. The party, or the coverage thereof, has been delayed. I imagine a certain actor popping downstairs for a restorative glass of pinot noir before facing the cameras.

Twenty minutes to go. I check my blog, where there is a comment from another blogger who went to TIFF and saw The Sea as well as Eleanor Rigby (including live cast Q&A afterwards). I spend three minutes feeling jealous. The same blogger mentions how she liked the 1995 Persuasion but never really warmed up to Amanda Root. I spend five minutes pondering how much I love Amanda Root.

Twelve minutes to go. I check the VLC media player with which I shall try to capture the live videostream. It is nearly a foregone conclusion that it will not work for one reason or another but still I check it and hope. [It did not work.]

At 9:31 the coverage finally starts. Brian Charles Johnson talks with Caiolfhionn Dunne, but I can’t hear a thing because the crowd noise is so overwhelming. Brian Charles has red pupils like a Child of the Damned, and so does Caiolfhionn.

Then Jim Norton comes over. It’s still not possible to hear anything.

Michael McElhatton stops by, looking quite handsome, and I hear him say that it’s good to get opening night over with. He mentions that Conor McPherson isn’t there for the opening.

There is a lull in the proceedings and the camera pans over to the crowd of fashionable New York types. Some of them have their pictures taken in front of the red screen. One of these is the artistic director of the Atlantic Theater. He stops to talk with Brian Charles, and mentions that Conor isn’t there because of something to do with his daughter. Finally there is Brian Gleeson in a pair of dark-framed glasses, looking sweet and a bit nerdish, not Kenneth-y at all.

Finally, in a burst of flashbulbs, Himself steps out and poses in front of the red screen. He is dashingly un-Tommy like, and a bit reminiscent of John Traynor in Veronica Guerin.

He speaks to Brian Charles, gesticulating with his hands and opening his eyes wide. I strain to hear the conversation, but can make out no words at all, as the noise level of the crowd has increased considerably. 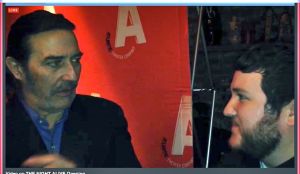 There is an interruption in the streaming, and I yell at the computer. Suddenly Mr. H. is gone. It is 9:50 pm, and Brian Charles expresses the wish that we have all had a wonderful time. I want to ask him whether there will be a transcript.