Attention: The author wishes to apologize in advance for the nerdiness of this post and the fact that it contains no discussion of Beautiful Men or Creamy Dairy Products or even Nectar of the Vine. However, there is a bonus image of a Beautiful Man at the end of the post. That is all.

The other day I ran across this surprising nugget of information: all words in ancient Greek end either with a vowel or with the consonants nu, rho, sigma (with a rare xi or psi popping up for variety).

I was skeptical, but running the eye over a page of Greek, I saw that this is quite true. It helps to account for the peculiar musical quality of the language. Giving in to my inner Nerd, I immediately began to investigate other languages.

A random page of French produces a surprisingly similar profile. In addition to the vowels, there are n, r, s, t, x, with the occasional l, m. Of course, French has so many silent consonants that most words sound as though they end with vowels.

Now for a page of English. c, d, f, g, h, k, l, m, n, r, s, t, y, x. Even more variety, as we might expect from a hybrid language, but excluding the vowels, the most common letters are d, l, m, n, r, s, t. A favorite line from Macbeth illustrates the pattern well: “No, this my hand will rather the multitudinous seas incarnadine.”

All these languages seem to have lots of words ending with s, nasal consonants (m or n), and liquid consonants (r or l). t is also very common, except in Greek, which still seems to be the outlier, with the fewest consonant endings. Okay, but maybe this is because these are Indo-European languages. They’re all cousins. What about another language family?

Finnish: My experimental page yielded lots of vowels, as in Greek, plus n, s, t. That’s it!   Where are all the languages with words ending in b and v and z? Hoping all you linguists out there enlighten me, so I can stop reading things backwards… 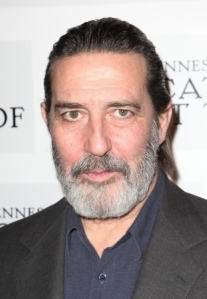 Mr. Ciarán Hinds in NYC for “Cat on a Hot Tin Roof.” His enunciation of consonants will raise your temperature, and he’s not too shabby with vowels either. Source: broadwayworld.com

3 thoughts on “Here Endeth The Word”