EPILOGOS: The last word in my novel of a Vestal Virgin of Ancient Rome, and her friendship with Julius Caesar. 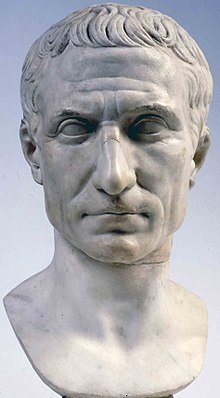 The Chiaramonti bust of Julius Caesar in the Vatican. This is my favorite likeness and is earlier than most.

I, Lucia Clara, devoted servant of the Goddess, now complete this account for the Archive of the Goddess, the sisters, and for the reader of the future who may chance upon these lead tablets when Romalia is no more, and Gaius Julius Caesar has been dead for a thousand years.

I married Azdrubal in the end, O Reader, for he convinced me that no one would bother to look into the unusual history of a Punic shipmaster’s wife. I retained the identity of Lutatia Clara, whose first husband was the nonexistent Gaius Vettius Novus. My dearest Az always called me Clara, and Maharbal was never told the full story of my irregular past. Still, I made sure to sleep under a different roof than Mago’s for three nights of the year, for in Roman law, this meant that I would not come “under the hand” and legal control of my spouse.

After hearing the news that Caesar’s will mentioned neither her nor Caesarion, Cleopatra fled Roma, and not a moment too soon, for a group of the conspirators had roused the People against her. The queen, Caesarion, Charmian and Bagoas were safe with me in the tunnels as assassins burst into Caesar’s villa, seeking to kill his son and prevent any future claims of sovereignty over Roma. The rest of the Aegyptian retinue found shelter in one of our houses until they were able to leave the city. Cleopatra claimed to be quite comfortable in Romalia, explaining that she had endured far worse during her exile in the desert. She held the sisters spellbound, telling how she first met Caesar when her man Apollodorus smuggled her into the Alexandrian palace, wrapped in a rough sack and slung over his shoulder.

Gaius Julius Caesar’s ravaged corpse was cremated publicly in the Forum, as Marcus Antonius displayed a wax replica covered with twenty-three stab wounds. The People were roused to fury against his killers, and to passionate veneration of Caesar himself. For three nights during the obsequies, a great comet blazed in the sky, announcing his apotheosis as the Divine Julius. Thus he was not wholly lost to me.

Before dawn, late in the month of Mars, the queen’s small party sailed for Alexandria in Azdrubal’s ship Hercules under his personal command, and I accompanied them. Thus it was that I beheld the Library at last, and spent a wondrous month there as the queen’s guest, reading and copying more treasures than I have space to recount. Immediately upon her return to her capital, the queen’s brother and consort, the teenaged Ptolemaeus, fourteenth of his name, died quite suddenly. It was said, and I do not disbelieve, that she had him poisoned in order to place Caesarion on the throne as her co-ruler. Whether she was truly pregnant with a second child sired by Caesar, I never knew. Two years later, Antonius became her lover, and as the Goddess foresaw, they met their ruin together.

When we returned from that month in Alexandria, Azdrubal took me to Panormus in Sicilia to meet our ten-year old son, Maharbal, whose name means “gift of Ba’al.” He was shy of me at first, but when I explained that my absence was due to a solemn oath I had sworn before his birth, he forgave me, and said that he approved of oath-keeping. In that way, he was like his father, who also forgave me, but more grudgingly. In time, Az understood that I loved him well. He never knew of the other love, the one I confided only to the Goddess.

Both Azdrubal and Marharbal are gone now, for I have lived too long. In the twenty-second year of the reign of Commander Caesar Augustus, adopted son of the Divine Julius, he who was once called Octavius, I was welcomed as a sister of Romalia once again. Though I am pleased to be home, and wear my token always, I have never used it again, nor have I spoken with the Goddess.

I trust that soon, She who gave my body will take it back.

Thank you to my loyal readers!

14 thoughts on “Lucia: A Tale of Roma Alia Epilogue”