Chapter 38 in my novel of a (former) Vestal Virgin in Ancient Rome and her friendship with Julius Caesar. 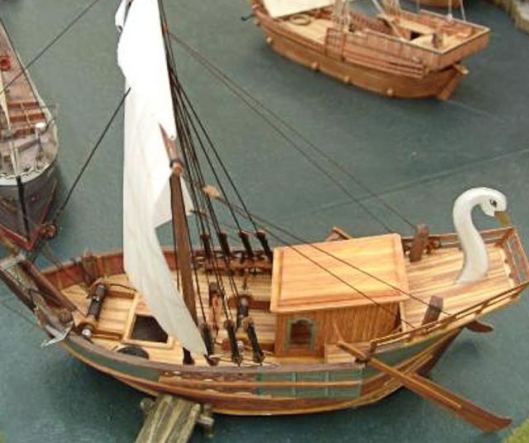 Model of a Roman corbita (small cargo ship) in cardboard. Note the goose-head ornament in the stern. Source: Replik-shop.de

Myrto, the Greek dancer from Paestum, did not mind that I proved to be a poor student of the crotala. She was patient, reminding me over and over to keep my wrists properly curved. For her, the crotala could not be separated from the act of dancing, but I was interested solely in the kinds of sounds one could make with the paired clappers of wood or bronze, and whether another person could recognize meaning in them.

“Certain sounds have meanings attached to them,” she told me, “but before saying more, I must ask whether you are an initiate of the mysteries of Bacchus.”

“No, but I am no stranger to mysteries,” I told her, “or the keeping of secrets.” When her eyes strayed to the pouch of coins on my belt, I drew out two more and placed them in her hand. They quickly disappeared, but where Myrto hid them on her person I could not tell. She grinned, and her green, feline eyes shone. “You are a woman, so the god will not be angry,” she reasoned. “Besides, I shall speak only of the crotala, not of the orgia, the holy objects themselves.”

My knowledge of Greek women’s mysteries was based on book-learning, yet the ancient poets have a great deal to say on the subject. Dionysus, or Bacchus, is the god of wine, and in some Greek cities, women worship him apart from men, dancing by torchlight in the mountain heights until they feel the god within. When they are on the point of ecstasy, certain holy objects are revealed to them, of which it is forbidden to speak. According to their poets, men look upon these activities with distrust. Still, it is unwise to anger the gods, and Bacchus is spiteful when crossed. Greek men too worship him, drinking to excess and garbing themselves like women to parade uproariously through the streets, or (for those who find such rites beneath their dignity) sacrificing and singing hymns in monthly meetings.

“Bacchus must be honored with his own songs,” declared Myrto, “and the sounds of the crotala have special meanings within this music.” She began to dance, slowly tapping out a rhythm as she accompanied herself. As her movements quickened, so did the clacking noise of the crotala, and the patterns of sound took different forms. Suddenly she stopped whirling about, and clicked several times, using both hands in a complicated series of taps. “That means the Bull-Horned God.” Another set of taps was performed all with the right hand. “The Thigh-Born One.” Tap, pause, tap tap, pause, rat-a-tat-tat. “The Zeus-nourished Thunderer.”

“These are all names of Bacchus?” It was no secret that the unborn god had been sewn into the thigh of Zeus after his mother was incinerated by a thunderbolt, or so the poets said.

“Yes. Now you try.” I clumsily tapped out each series, careful to hold my wrists the way Myrto demanded. After the lesson, I went to a shop in Broom street which she recommended, and purchased several sets of crotala.

These drew a great deal of interest back in Fourth Region. A surprising number of sisters had worked at one time or another as musicians and dancers, and a few were even familiar with Myrto’s language of castanets. My feeble efforts to demonstrate the crotala were received with amused tolerance, and the experts—including my old friend Anna—quickly embraced the project of creating a set of “words” to use in a communications system. That first version of the language was crude compared to what we have now, yet it included “words” for the major landmarks in each region, and for the concepts “assembly,” “emergency” and “intruder,” as well as “evacuate” and “all clear.” Any trained sister who heard a message was supposed to pass it on via the tunnel where it was most likely to reach the next group and be disseminated to all of Romalia.

Drusilla, or Dru as I came to call her, thought my idea was a good one, but correctly predicted that it would mostly be used to spread the word when one Region was hosting a party and there was wine or a meat meal to be served out. After a few setbacks with dropped or doubled messages, the sisters learned how many trained players were needed in each region, and how to avoid interrupting each other’s “talk.” Many sisters could understand a message, but most could not pass it on except through normal speech. The new system made the job of carrying messages less onerous, and was unexpectedly helpful in determining where Tita and the other mules were needed throughout the day.

“Why are so many of the sisters already proficient with the crotala?” I asked Dru, as we made our way from the Romalian house on the Aventine to the docks, so that I could get a first view of the ships. For this outing, I wore a white tunic and green overdress suitable to a citizen matron of limited means; Dru was playing the role of my brother.

She ran a careless hand through her cropped blonde hair, making it stand on end. Her manly garb consisted of a white linen tunic, loosely belted, a rather dashing dark-blue cloak, and boots. She was quite handsome, and her ensemble emphasized her broad shoulders.

“They worked as entertainers,” Dru explained.

“You mean, as musicians and dancers? But why did so many come to Romalia?”

Dru’s smile was sardonic. “As a woman of the privileged classes, Lucia, your experience of Roma has been limited. Yet surely you have seen female dancers and flute-players at the banquets of of public men?”

“Not often,” I replied. “Sometimes the musicians were male. Perhaps there was some lyre or flute-players, but the few dinner parties I attended were for conversation, and there was no separate entertainment.”

“That’s what you think,” said Dru. “No doubt such things are managed more discreetly when a Vestal is expected to be present, but it’s normal for entertainers to sleep with male guests at the end of the evening. And brothel women, at least in the more respectable establishments, are expected to be able to dance and play an instrument. Very often, they and the entertainers hired for parties are one and the same.”

“So in Romalia, we have a great many women who have escaped this kind of work?”

“Yes, I think so. The Goddess sends us women from many places and backgrounds, for Roma itself is like a great mixing bowl into which all the liquors of the world are poured. Few women of your birth can disappear into the tunnels without causing a great disturbance upside, and in any case, few of them would want to live like us. But brothel women face a difficult life once their looks are gone, so when they do escape, and end up in Romalia, they make loyal citizens.”

We had now reached the docks, which were relatively quiet in the half hour before dawn, but would soon bustle with activity. Only smaller ships, the corbitae, could navigate the Tiber, being laboriously drawn upriver by oxen on a towpath. Even these risked running aground in the summer months. The really large vessels had to unload in Ostia at the mouth of the Tiber, or anchor offshore, and send their goods up to Roma on barges.

Despite their “smallness,” I found the fat round corbitae impressive, especially when Dru told me that they could carry over a hundred passengers plus a full cargo. We strolled along the docks, examining each ship. They all looked alike to me at first, but gradually I began to see the details through her eyes. Some had two or three masts instead of one, some had a kind of gallery in the rear, and the smaller ones were sleeker, less ungainly and basket-like than the corbitae. All were brightly painted, and many had a distinctive ornament at the stern, the curved head and neck of a goose.

“Let’s turn around and walk back towards the house,” said Dru, casting a wary glance around. Early morning, she had explained, was the safest time to examine the docks, but there was no truly safe time. Even in the morning, one sometimes encountered sailors who had been up all night drinking. “This time, as we pass, keep your token in your hand as you examine each ship. That’s the method Thana uses.” I followed her instructions, waiting for some signal or sensation as she pointed them out again, noting that this one was owned by a very rich Horseman who was a tax collector, and that by one of the few traders with access to the costly new fabric called silk, which was smoother and finer than the finest linen. Silk came from the Seres at the ends of the earth, who sold it to the people of India, who sold it into Arabia, who sold it to the Aegyptians. In return, it was said that the Seres wanted glass vessels and beads, which were as exotic to them as their silk was to us.

Though I held tightly to my little knucklebone, I felt no change in its warmth as we reviewed the ships one by one. I was distracted, for the token reminded me of Caesar and the twin piece which I had given him, but I forced myself to stop daydreaming and pay attention. Still there was nothing. Dru did not seem disappointed at my failure; she merely nodded and said that we would try again in a few days, for different ships were arriving all the time.

Historical note: The Seres are, of course, the Chinese. The secret of the domesticated silkworm remained limited to China until the Byzantine period. The Greeks had access to a wild silkworm, a different species than the Chinese one, and produced diaphanous garments during the fifth century BCE, but this type of silk production was never widespread.

My “language of the crotala” is fanciful, yet it is true that Dionysus had to be honored with a certain type of music, which was very percussive and dance-able.