Chapter 34 in my novel of a Vestal Virgin in Ancient Rome and her friendship with Julius Caesar. 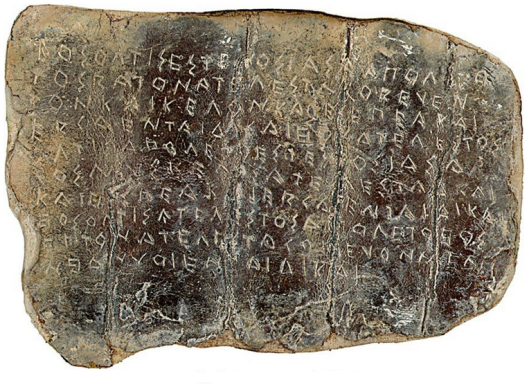 A lead curse tablet written in Greek, from Sicily (5th century BCE). Lead was often used as a writing material because it was soft enough to be easily marked with a stylus.

It was always chilly in the cavern of blue stars, but the fresh air was invigorating, and unlike other places in Romalia, the Archive possessed real furniture: a long wooden table on which one could lay out tablets, and some chairs. Overcome with joy at the gift of reading, I spent several days with Camerina, perusing the treasures of the Archive by lamplight.

I turned first to Ennius’ poem on the history of Roma, a poignant reminder of his descendant Ennia, the friend of my youth in the Vestal House. Then came the books of sacred signs and prayers, which made me think tenderly of my evenings with Fabia. Though able to endure for centuries without decay, the lead tablets in the Archive are surprisingly fragile—easily bent, and prone to breaking or crumbling around the edges if they have been hammered too thin. They are not as easy to read as works on papyrus, and despite the light afforded by the lamps and the beautiful glow-worms, I strained my eyes trying to decipher them. None of the tablets themselves are older than a century and a half, for the Archive was established with the founding of Romalia, yet some of the documents were copied from much older originals.

Oldest of all are the Sibyl’s oracles, scratched onto lead strips. Each strip deals with a different kind of prodigy or misfortune—lost battles, plagues, earthquakes, two-headed calves, the withdrawal of the sea and its return in a great wave—and advises the best way to respond to these signs of divine anger. The most common remedies are processions, sacrificial feasts, barefoot group prayers by the city’s virgins or matrons, and solemn dances. Nowhere, I must add, does the Sibyl Euphemia recommend blaming or punishing the Vestals for the city’s ill-fortune.

Only a few of the oracles described events expected to take place in the future. One predicted a dire civil conflict between “the blue-eyed one and the new man,” and this I took to refer to the war between Sulla and Marius. Another spoke of a dead man riding to heaven on a comet, and a third heralded a Golden Age when the flocks would no longer fear the wolf, and the sheep would grow fleece in every color of the rainbow.

Camerina’s story interested me greatly. She was the daughter of an ancient plebeian family who traced their origins to the Latin town of Cameria, destroyed by Romulus in one of his first conquests. Camerina’s father had been a scholarly man, a widower who devoted himself to studies of history, and educated his daughter because he lacked a son with whom to share his books. “We read Hellanicus’ account of Aeneas founding Roma, and Polybius on the war with the Carthaginians,” she told me. “My father’s surrogate son was Diodorus, a Greek from Sicilia, who had set himself the task of compiling a universal history. I used to write out fair copies of his work after he revised it. But I fell in love with Diodorus, and he was quick to take my virginity, though he had no thought of marriage. When I became pregnant, my father was furious with both of us. He had a terrible fight with Diodorus, and expelled me from my home. I sought sanctuary with Atilia, the priestess of the Good Goddess on the Aventine, and offered to undertake any kind of work she had.”

“Did your father ever look for you?” I asked. “Did you see him or Diodorus again?”

“I do not know if he looked,” replied Camerina, “for I never left the realm of the Goddess again. Atilia delivered my daughter and introduced me to Thana. That was ten years ago. Ever since then, I have led a life of withdrawal and contemplation of the Goddess. I am one of the few sisters who remains in Romalia always. I do not suffer from the dark, as others do. Perhaps it is the the light of the glow-worms that sustains me!” She was half-joking, but I thought it might be true. Camerina was very pale, like the fishes that flashed through the water of our little Styx, but she seemed healthy enough.

“And what of your daughter?” I asked.

“She is Amata. In her infancy, I nursed her, but she has always had fifty mothers and a hundred aunts. So anxious were the sisters to lavish their love on her that I could scarcely call her my own after the first two years. She spends most of her time in First Region, and visits me about once a month.”

The night after Camerina told me her story, I fell peacefully asleep at the table in the cavern, hunched over the tale of Odysseus and Penelope, as the lamp burned out. It seemed to me that I was suddenly confronted by the Goddess, who loomed above me, bathed in light. The expression on her face was none too pleased. I tried to leap up, to stand respectfully before her, but my muscles were paralyzed. I could only gape at her, and wait for her to speak.

“Lucia,” she said reproachfully. “Why have you not obeyed my commands? Do you have so little regard for me?”

My throat loosened, and I croaked, “I was wrong, Divine Lady. Be merciful and forgive …I saw the library and I could think of nothing else.”

The corner of her mouth quirked. “Yes, I know all about you and your books. But that is not the only reason, is it? Speak the truth!”

“The truth is that I am afraid,” I confessed. “I am afraid that Caesar will call his lictors to seize me and throw me into King Tullius’ dungeon until he can bury me again, or that he will laugh at your message and call me a fool.”

“You will not be thrown into the Tullianum, Lucia. And if I do not care whether he laughs, why should you?” she asked. “Have you told me all your fears?”

“No, Goddess,” I said humbly. She waited, holding my gaze, and I was unable to look away. At last I admitted, “I love him, and to see him would reopen the wound in my heart.”

“Nevertheless you must go,” she said gently. “You are the only one he might believe. I have sent him dreams, but they are only fragments and shadows, which he ignores. Obey me, Lucia. Obey me…obey.” Her voice echoed in my head as I woke and rubbed my eyes.

The next morning, I went straight to Thana and recounted the dream vision, leaving out my personal conflict. She laughed ruefully. “The Goddess rebuked me as well, and thereafter my night was sleepless. Come, let us consider how you might deliver the message. What of a letter? I have heard that Caesar conducts much of his business by letter.”

“He does indeed,” I said glumly. “He divorced Pompeia by mail. But the Goddess made it very clear that I must go to him in person.”

“We could invite him to one of our houses in Roma, but I am uncertain about revealing those locations. Then too, walking the streets is dangerous for public men these days, and he would certainly bring lictors. Drusilla says that they are calling this year ‘the Consulship of Julius and Caesar,’ because the other Consul, Bibulus, is so fearful that he stays barricaded in his mansion. At first he used to stalk into the Forum before every Senate meeting and proclaim that the auspices were evil, hoping to stymie any legislation that day, but some partisans of Caesar dumped a bucket of feces and urine over his head. Since then, he dares not show himself.”

“Poor Bibulus!” I said, but I couldn’t help laughing a little at his misfortune. It was just like Caesar to circumvent him by wounding his pride fatally, but leaving his person intact.

“You could visit him the same way you did Fabia, and use the sewer tunnel in the Forum that leads to the shrine of Plenty in the Royale,” suggested Thana. “Yet that would mean revealing the doorway.”

I was dubious about this, for I did not trust Caesar. “Perhaps you should consult the Goddess.”

“No, Lucia, it is you who should consult the Goddess. Try it now.”

I had not yet used my tokens, but I wore them in a new cloth pouch suspended from a leather thong around my neck. I removed the two tiny bones now, and noted how warm they were, from resting close against my skin. Thana waited patiently while I self-consciously held them between my hands and closed my eyes. But what should the question be? Mentally I weighed and discarded several queries. Finally I asked aloud, “Will visiting Caesar in the Royale endanger the sisters?”

For a moment, nothing happened, and I wondered whether I ought to try a different question. Then the warmth of the little dice increased, and seemed to spread through my hands, and up my arms. The sensation expanded, slowly, and when it reached what I knew to be the marrow of my bones, I heard the Goddess speak: It will not increase the danger. With this unsatisfactory answer I had to be content.

When I repeated it to Thana, she said, “I will write a message for Drusilla to deliver, specifying that if he waits there on the Kalends at dawn, he will learn something of interest. We will move the wheel before the slaves in the Royale rise for their morning tasks.”

To this plan I reluctantly agreed.

Historical note: Diodorus the Sicilian was real and his Library of History has survived. He was contemporary with my characters but nothing is known of his personal life.