Chapter 22 in my novel of a Vestal Virgin in Ancient Rome and her friendship with Julius Caesar. 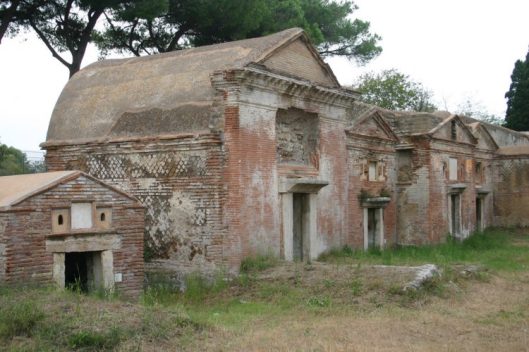 Over the course of the day, Anna, Cerberus and I ranged widely over the field, following the herd, for the area around the tunnel had been sheared clean of most vegetation. The goats delighted in climbing hillocks and fallen stones, and the lead doe decided which direction to try next, with a little help from Anna and Cerberus. Still squinting at the bright light, I sat in the shade whenever I got the chance. We reached a rivulet and the herd drank deeply, but Anna had to wade in and rescue one who had become stuck in the muddy stream bed. She easily lifted the animal, explaining that these tiny goats were unique to Romalia. “The first sisters to take to the tunnels brought them, I think. That was more than a hundred years ago. They favored the little ones that they could manage easily—even carry if they had to.”

When it was time for the midday meal, we sat in the shade and ate leftover griddlecakes wrapped around cheese and mushrooms, which Anna had brought from the kitchen.

“Are you happy in Romalia?” I asked. “Do you ever want to go back to Roma?”

“Never,” she replied firmly. “You wouldn’t know it to look at me now, Lucia, but I was beautiful once. I was freeborn, but an orphan without a dowry, so I found work sleeping with men. It was difficult and dangerous, yet I was popular. I moved out of the brothel pretty quickly, and set up on my own. I had several patrons who were well-off, a nice flat near the Vegetable Market, and beautiful clothes.”

“What’s it like, sleeping with men?” I asked. I was curious, and Anna was a frank, open person. She was offering her story, and as I now understood, this was a kind of gift.

“If it’s your favorite man, and he’s interested in pleasing you, then it’s great. Anyone else, it’s simply hard work,” she said. “Most of the time, my role was to please them, and some were hot-tempered, jealous types. They’d get drunk and come around with torches, pounding on my door in the middle of the night, and trying to break in. More than one of them beat me, and black eyes aren’t good for business.”

“I can see why you wanted to leave,” I said, imagining with shock the life of this woman, whose body was anything but inviolate. When a woman was neither virgin nor matron, men thought they had a right to handle her any way they pleased.

“Oh, I had no idea that I could leave,” said Anna. “One night I was coming home after a party, and a former lover abducted me. He was angry because I had shut my door to him. His thugs gave me a thorough beating and poured hot oil on my face.” She pointed to the wide red discoloration that ran from forehead to chin. “They thought I was dead, so they dumped me down a well-shaft. I was a sad, broken thing. The sisters found me and nursed me for months. I owe them, and the Goddess, my life.”

I was struck speechless by her story, and didn’t know how to respond. “And as you were rescued, so you rescued me,” I said at last.

“Something like that,” agreed Anna. “I expect that the Goddess has plans for you other than goat-herding. But it’s important for you to learn all of our way of life.”

“I am glad to learn,” I said. “Thank you for the gift of your story. I would give you mine in return, but you already know that I was a Vestal.”

I described my childhood in the Vestal House, and my upbringing by Andromeda and Fabia. I told Anna about Ennia’s books, Licinia’s pastries, Sergia’s haughtiness, and Popilia’s dramatic flair. She was interested in the Vestals, and quick to point out certain similarities between their life and that of the Sisters.

“Downside, we share the chores. And there are no husbands to take control of the money. No men supervising us.”

“We Vestals did have a male supervisor.” I explained about the Pontifex Maximus, and how Fabia had to answer to him on all matters affecting the Gods’ Peace. “Caesar is the one who condemned me.”

“Caesar? Yes, we sisters know something of him. But why did he condemn you? Did you have sex with a man?” she asked bluntly.

“Not by choice.” I explained about Claudia and Volusius, and my continuing uncertainty about my virginity.

Anna shook her head in disbelief. “I am glad that the Goddess sent you down to us, and not this bitch Claudia. Still, serving as a Vestal ought to be freely chosen, because some women can’t be coerced into chastity. We have desire too, just like men. Wasn’t there ever a man you wanted?”

“Just one,” I admitted. “But I would never have betrayed the Goddess and the city.” I thought of Fabia’s terrible struggle, and the price she had paid by holding to her duty.

“Well, now you are no longer a Vestal. You can be with a man, if you want.”

This surprised me. “I thought you said that there were no husbands in Romalia.”

Anna laughed. “There aren’t. That is one of our most sacred laws. Just as the Goddess is nobody’s wife, we keep ourselves free. Quite a few of us prefer other women as companions, but those who want sex are not forbidden to seek it upside. They must notify the sisters of their activity, and take precautions to prevent being followed when they return to Romalia.”

“What if they become pregnant, or wish to marry?”

“We have ways of preventing pregnancy, but those who marry or cohabit must leave us. They remain bound by their oath of silence, but they go with our blessing. Those who conceive while unmarried may stay with us and bear their babies, if they are girls. The girls are always given the name Amata.”

Beloved, I thought. The same name by which I had been inducted into the Vestal order. “And the boys?”

“They must be handed over to their fathers, or to some other Romalian family. That is our law. Any sister who goes with a man knows this requirement.” This reversed Roman custom with respect to the sex of the baby. Every Roman father had absolute power over the children born of his wife. In the first days of an infant’s life, the father decided whether or not to rear the child. If he suspected its legitimacy, found it imperfect, or simply did not wish to raise and dower another daughter, he had the infant “put out.” In practice, this meant taking the child to one of the known spots in the city where unwanted babies were left. The rare unwanted boy might be adopted by a childless couple, but most exposed babies were girls. They were likely to end up as slaves—usually prostitutes—if they survived at all.

All this I had learned from the talkative, tipsy matrons at the festivals of the Good Goddess. Even the wives of wealthy and powerful men sometimes suffered the agony of having their babies ripped from their arms. It was not unusual for legionary commanders and provincial governors to be absent from home for years at a time, and no man enjoyed being cuckolded. I remembered a certain Horatia, who told the other matrons how she saved her daughter from the vengeance of her husband, Marcus Fulvius. When she realized her condition, she withdrew to her father’s estate in order to conceal the pregnancy, then entrusted the child to her mother, who reared her as “an orphaned cousin.” On the other hand, certain men in need of an heir had been known to acknowledge infants obviously not their own, if they were healthy and male.

Now the sun was approaching the horizon. With Cerberus’ help, the lead doe brought the herd back to the tomb from which we had emerged. We made sure nobody observed us as we sent the goats back down the tunnel. They were eager to return to their pen, for it was milking time.