This is a zombie post while I am traveling to Crete 🙂

About 5300 years ago, people in Ireland built three huge mounds in the bend of the river Boyne, about 50 km north of what would become Dublin city. These were passage tombs, marked by a long narrow tunnel leading to one or more burial chambers. The people of the Iron Age believed that these mounds were entrances to the Otherworld, inhabited by a superhuman race called the Sídhe (fairies). 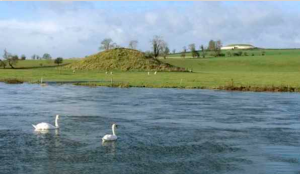 The passage tomb at Newgrange seen from the Boyne. In my story it is called the Brug na Bóinde, “the mansion of the Boyne.” 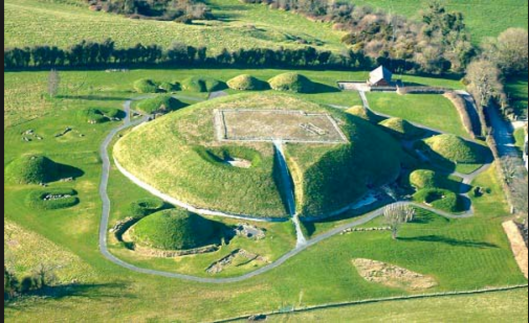 Aerial view of the passage tomb at Knowth.

One day Lí Ban came to the house and said, “Sister, Cúchulainn’s wife has gone to the Brug na Bóinde, and she stands at the door, calling day and night for her husband.” The Brug was the greatest síd in Éire, a huge mound which lay north of the river Boyne.

“What can Emer be about?” asked the Man testily. “I’ve only been gone for a couple of weeks.”

Fand tried to catch Lí Ban’s eye to keep her from speaking, but she didn’t notice. “Cúchulainn, six months have passed in your land, though only a short time for us.”

“Six months.” He seemed taken aback, but then said, “I will deal with Emer. Show me how to find this place.”

They mounted Fand’s white horses and rode into the woods until they came to a trilithon of great stones. They dismounted, and Fand gestured for the Man of Éire to walk first beneath the lintel. The trees on the other side could be clearly seen, but when they stepped in, they found themselves in a long, dark passage. “See you the light at the end?” asked Lí Ban. “That is where Emer waits.”

Continuing down the passageway, they reached the bright light. Fand blinked. Unlike the land of the síd, where it never rained except in gentle, pleasant drops which nourished the flowers, this land was often beset by sudden downpours, heavy fogs, and storms. But on clear days, the light that shone through the trees was the light of the brilliant sun. When the Man had come with her to the síd, it had been Samhain, the autumn festival. Now it was Spring, and warming, though the trees were not yet leafed out.

When Fand’s eyes had adjusted to the light, she saw a fair-haired, blue-eyed woman standing ten paces from Cúchulainn. The woman was still young, though her appearance was not as youthful, nor her beauty as dazzling as Fand’s. She wore a blue robe pinned with gold brooches, and a necklace of glass beads. Her beauty is middling, and her clothing and jewels are but crude things beside the glories of the Sídhe craftsmen, thought Fand scornfully.

The blue eyes were riveted on the Man of Éire with a strange, fierce look that Fand could not interpret. “So it is true, my husband,” Emer said, “You are quite healed. Quite restored to your former strength.” Then she turned to face Fand. “And this is the one who has bewitched you. Cepp divined these things accurately.”

I would not willingly dress one of my servingwomen in that robe, thought Fand, though she grudgingly recognized that its color was rather fine. Then Fand noticed that Emer’s waist was cinched with a belt, from which hung the ornamented sheath of a scían. The mortal woman had removed it from the sheath, and she now held the dagger in her hand, its long blade glittering. Fand realized that she was facing Emer alone; Lí Ban was hanging back in the shadows like a coward.

“You should be grateful to me. I saved him from his wasting sickness,” she said to Emer.

“You caused his wasting sickness, so it is only right that you lift your curse from him.” Emer took a step forward in Fand’s direction.

“He pierced me with his javelin,” said Fand defensively.

“Isn’t that what you wanted all along?” sneered Emer. “I’ll wager it wasn’t the last time.” She took another step forward, gripping the scían purposefully.

“Have no fear, Fand.” The voice belonged to the Man. So that is what his voice of anger sounds like, she thought. “The daughter of Forgall the Wily may boast to her companions of her mighty deeds, but she is not likely to challenge me.”

Although he had been addressing Fand, his eyes were on Emer. Now he said to her, “Your thin, feeble knife does not frighten me, woman, and neither does your anger. I will not trouble myself with you, for female strength is not sufficient to call forth my power.”

“Have you forgotten the strength of Aoife so soon?” retorted Emer. “Why do you dishonor me before all the women of Ulster, and all men and women of rank in Éire? The pride of mighty battles has made you boastful and arrogant. And yet, my beautiful lad, my Cú, it may be that you cannot leave me, however much you wish to.”

“Emer, why will you not release me, to abide with Fand?” argued the Man. “She is of a noble family, and her beauty is as pure and unblemished as a pearl. In her lands, she possesses an abundance of horses and cattle. She is eager to please me. There is nothing you can promise that she will not give to me herself.”

Emer kept her eyes on his. “It could be that this woman you have chosen is no better than I am. But what’s new is bright, and what’s familiar is stale. The unknown is honored, and the known is neglected. My Cú, we lived together in love once, and we could do so again, if only I was still pleasing in your sight.”

The Man grew more mournful than ever at this, and he looked at the ground. “By the gods, you do please me,” he muttered. “You will please me as long as you live.”

Fand’s heart felt as though it would burst with the pain. Never, never had she expected to be bested by a mortal woman, with her dull skin, in her rags and poor ornaments. With a few simple words, the Man of Éire had insulted Fand gravely. And yet, how can I bear to lose him? I love him. Finally she drew herself up proudly, though she felt that something was dying inside of her, and said to Cúchulainn, “Leave me, Man. Go back to her.”

“No!” said her rival. “Better to leave me. Fand, this man is in love with you. I know that now.” She turned to Cúchulainn. “Go back with her and be happy.”

“This I will not allow,” said Fand sharply. “It is too late. This woman is willing to give you up, in order to see you happy. She has defeated me. Sister, let us go.” She turned on her heel, and allowed herself one last, longing glance at the Man before she swept with Lí Ban back through the doorway of the Brug. Her beautiful Man of Éire would not be able to follow.

In her house, she wept until she thought she could weep no more, and then sobbed anew, certain that the wound in her heart would bleed forever. Lí Ban came to play upon the harp, and tried to beguile her with a new set of fidchell tokens, half fashioned of inlaid silver, and half of golden tears from the seashore. In vain her women talked of new styles for plaiting and curling the hair, and the daring fashions set by the far-off women of Roma. In vain they tempted her with honeyed sweetmeats, and exotic fruits. She began to waste and grow thin and haggard, but even then, she cared not.

One day she was staring disconsolately into the freshwater pool, where the lilies had ceased to bloom, when the salt pool was disturbed, and its waters began to surge violently. At length, her husband Manannán emerged and shook himself, scattering the water from his hair and beard like a great hound. A deep-blue cloak lay heavy over his massive shoulders, pinned with a brooch fashioned from the intimate center of a delicate, rosy seashell. Otherwise, he was naked.

“My Fand, my pearl, what is amiss? Why do you look so ill and wasted?” he asked, regarding her with a puzzled look.

“Manannán, how can you ask such a thing? While you were gone, I lost my heart to a beautiful mortal, a Man of Éire, and when he rejected and insulted me, I lay here in despair an untold number of days. For you see, my husband,” she explained, “I was quite certain that you would never return to me.” And she wept again, for the double hurt she had taken.

Manannán sat down again in the salt pool, pondering her words. “I see, my Fand,” he said at last. “Come then, and let your tears flow if you must. Sit on my lap and let them mingle in the salt pool.”

Fand said peevishly, “Husband, you know well that the salt pool troubles me, with its stinging and pale and razor-toothed creatures.”

“Nonsense. None will dare molest you while I am here. Sweet Fand, draw near to me again. I desire the company of no other but my own dear wife.” Reluctantly, she lowered herself into the pool, and he wrapped his blue cloak about them, and clasped her close to his powerful chest. Fand laid her head against him and inhaled the scent of the sea. “Is this not a fine reunion?” he asked.

“Yes,” said Fand, for the nearness of him comforted her. “But although you are my husband, I would rather have had Cúchulainn, for he is far more beautiful. I shall not be able to forget him, nor my heartsickness.”

“Ah, Cúchulainn. Even in my Isle of the Apple Trees, word came to me of his glorious deeds. He will not look upon you again; I shall see to it.” Manannán’s cloak possessed marvelous powers, Fand knew. If he wrapped her in it and named another person, however far off, she would never lay eyes on that person again, not even in an aisling of the salt pool.

“And what of my heartsickness?” asked Fand.

“Wife, I know a cure for that too.” He laid her on the gently sloping rim of the salt pool, and began to kiss the pearly pink tips of her breasts.

Notes: Fand was an interesting character to write. I could have made her more of a villainess, since the reader’s sympathies must lie mainly with Emer, the forsaken wife of Cúchulainn. But I wanted to Fand to be appealing. She is self-centered in the same way as a child or an animal, but she also has the haughty pride of an adult member of her race, the Sídhe.

Emer’s moving speech (“What’s new is bright, and what’s familiar is stale”) is adapted from her words in the saga, and its emotional truth is still evident today.