Yesterday we lost Glen Campbell, the legendary singer, songwriter and musician. I knew it was coming, because when we saw Campbell on his 2012 tour, he already had Alzheimer’s disease. Some of his children toured with him, and the show was quite moving. He forgot some things, and had to be reminded of the set list. But his playing and singing abilities were unaffected. After fifty years of constant performing, those skills were probably the last to go.

Campbell’s biggest hit was Rhinestone Cowboy, but that one is far from my favorite. I like Gentle On My Mind, written by folksinger John Hartford. The song puts into words the love of a drifter for a woman he visits whenever he’s passing through town:

The narrator is unfaithful in every way except one. He is incapable of making a commitment, yet wherever he travels, this woman is present in his thoughts. The song is a classic expression of the conflicting masculine desires for freedom and love.

The studio recording is excellent and you can see a young Glen reproducing it here. But check out this version, with an amazing guitar solo that demonstrates why Glen Campbell was one of the most sought-after, highest-paid session musicians before he became a star in his own right.

My other favorite is Wichita Lineman. Like Gentle On My Mind, it’s a song of masculine yearning, this time the inner thoughts of a strong, silent type who has lost his love.

The lineman immerses himself in his mundane work, fretting over the weather and the possibility of snow. And then, unexpectedly, he gives voice to one of the most romantic declarations of love ever made by man to woman. Simple and timeless, it’s a passion worthy of the Roman love poet Catullus. Not just anyone could sing Wichita Lineman and bring it off, but Glen Campbell knew exactly what to do with this golden material.

Wichita Lineman was written by Jimmy Webb, who also gave Campbell his hits By The Time I Get To Phoenix and Galveston. I just heard a recording in which Webb noted that the first time they met, in the mid 1960s, the first thing Campbell said was “You need a haircut.” Their politics were diametrically opposed, and they didn’t much like each other in the beginning. But in time they became very close, and Webb contributed the title song and three others on Campbell’s last album, Adiós.

Here is part of Webb’s tribute to Campbell in Rolling Stone:

“I believe that Glen was to American music what the Beatles were to British music. I’m not talking about my songs, I’m talking about the countless records that he played on, including ‘You’ve Lost That Lovin’ Feeling,’ ‘Viva Las Vegas,’ ‘Johnny Angel,’ ‘Along Comes Mary,’ records with the Velvet Underground, Jefferson Airplane, the Mamas and Papas’ records. He played with all kinds of genres, with different instrumentation and different styles. If it was a just and righteous world, Glen would be credited as one of the great, seminal influences of all time. He was a secret weapon in the armory of Sixties record producers.” 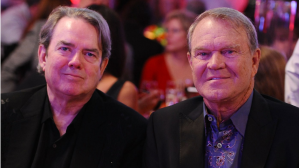 Farewell Beautiful Man, and thanks for the music.

6 thoughts on “Gentle On My Mind”